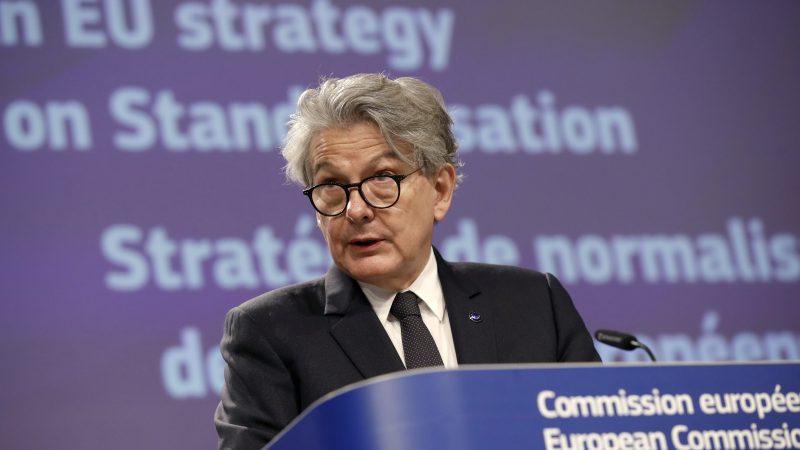 The European Commission’s new Standardisation Strategy outlines a renewed commitment to engage in the definition of technological standards for emerging technologies to counter growing international competition.

On Wednesday (2 February), the EU executive presented the new strategy meant to ensure that European interests and values are reflected in international standards.

“Technical standards are of strategic importance. Europe’s technological sovereignty, ability to reduce dependencies and protection of EU values will rely on our ability to be a global standard-setter,” said Internal Market Commissioner Thierry Breton.

Industry standards allow companies to reduce the compliance costs with legislative requirements, for example, Wi-Fi frequencies, and enable the interoperability of products and services, such as the USB ports for laptops and charges.

Standards can have important implications for safety, energy efficiency and innovation. As moving away from technological standards can entail prohibitive costs, regulators worldwide have increasingly looked at the strategic nature of the standard-setting process.

However, Higgins warned that the process will not be an easy one. “It will take real skill to navigate the path between the speed of delivery and inclusiveness; between being a tool to support European technological sovereignty and being a leader in global standard-setting.”

In December, the EU Chamber of Commerce in China warned that Beijing is increasingly trying to shape international standards on emerging technologies such as Artificial Intelligence and 5G, as detailed in the China Standards 2035 plan.

In an interview, the EU digital chief Margrethe Vestager pointed to the proposal from Chinese telecom companies Huawei and China Telecom for a “New IP”, which would have radically changed and likely fragmentation of the way the Internet operates.

Europe was too naive

“We were too naive. We were open by default in the belief that things would go our way. But we can’t be open at any price,” Breton said.

The strategy outlines five action points, starting with identifying strategic areas for the EU agenda on the green and digital transitions, with chips certification and data standards explicitly mentioned as cases in point.

“In an increasingly globalised world with accelerating digital transformation, there is a clear and present need to balance innovation, societal needs, and sustainability,” said Ray Walshe, the director of EU Observatory for ICT standards.

The strategy targets the current governance of the European standardisation organisations to prevent undue foreign influence with a revision to the Regulation on standardisation.

According to the proposal, when the Commission requires the EU standard-setter to develop a new standard, the decision should be taken exclusively by the representatives of the national standardisation bodies.

Breton pointed to the example of Galileo, the EU-sponsored navigation system that applied to the European Telecommunications Standards Institute (ETSI) to access smartphone applications. However, the application was rejected “due to influence from other players.”

The EU executive will also launch a consultation with member states and an evaluation to ensure that the voice of SMEs, civil society and consumers is better heard.

The Commission also wants Europe to play a more active role internationally and defend European interests more strongly thanks to a better-coordinated effort of the relevant stakeholders.

Moreover, a part of EU funding under the Horizon Europe programme will fuel research on the relation between innovation and standards to anticipate future standardisation needs. A code of practice for researchers working on standardisation will be drafted.

Marco Leto Barone, policy coordinator for Europe at ITI (Information Technology Industry Council), underlined that Brussels should seek to coordinate its standardisation efforts with international partners, notably with the United States, in the context of the recently established EU-US Trade and Technology Council (TTC).

One of the ten working groups of the TTC is precisely dedicated to technology standards cooperation. In Barone’s view, this dialogue would “facilitate international regulatory compatibility and avoid regulatory divergence in standards-intensive areas such as for AI, cybersecurity, data, portability and IoT.”