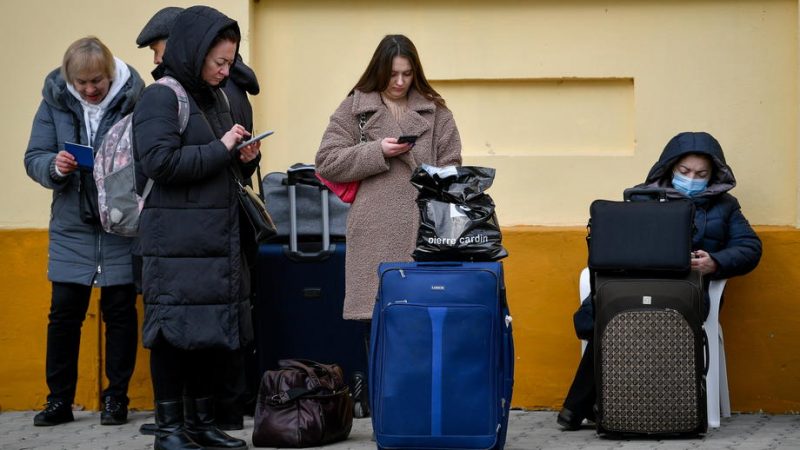 Ukrainians with biometric passports, a Schengen visa or a temporary residence permit “will be able to integrate to the jobs market right away”, Navickienė confirmed at a press conference. [EPA-EFE/Zsolt Czegledi]

The measures include free international calls to Ukraine, the distribution of SIM cards to refugees fleeing to neighbouring countries, and free Wi-Fi at refugee camps.

“There is an individual drive for operators to do whatever they can. Every operator has in its company now a dedicated team working on the situation to see what we can do,” Steven Tas, executive board chair of the European Telecommunications Network Operators’ association (ETNO).

Telecom operators have also been working toward removing roaming charges with Ukraine; however, the implementation is more complex as it requires the receiving operators to agree to the arrangement.

Meanwhile, the European Commission and national governments have urged online platforms to shut down Moscow’s war propaganda channels, such as Russia Today and Sputnik. However, for internet providers blocking specific content would go against the principle of net neutrality; hence they are waiting for a political decision on the matter.

For Tas, the Ukrainian crisis has shown once again how telecommunication networks play a vital role in a time of crisis, highlighting that the operators similarly introduced voluntary measures during the surge of data usage that followed the COVID-19 lockdowns.

“At the European level, we coordinate in associations like ETNO to see what can we learn from each other in order to maximise the support for the region,” Tas added, stressing that the trade association is acting as a communication channel between the European Commission, the Federation of European regulators and the industry.

Telecom executives, policymakers, and regulators have met in Barcelona at the Mobile World Congress that officially started on Monday (28 February).

According to a stakeholder, the industry reaction was swift thanks to all these actors being in the same place, as operators could share what actions they were taking and policymakers could convey their concerns.

The measures are short-term and subject to change or extension based on new developments in the Ukrainian war.