Negotiators on a major EU telecoms bill want to introduce fast 5G networks by 2025. But they cannot agree on how to coordinate the radio spectrum needed to support faster internet connections. [Ervins Strauhmanis/Flickr]

This article is part of our special report Mobile World Congress: Europe rushes to keep pace on connectivity.

Much of the Brussels policy crowd visiting this year’s Mobile World Congress in Barcelona headed home early to monitor, lobby or take part in another round of tense negotiations over a draft EU telecoms law that is taking place on Wednesday and Thursday (28 February-1 March).

They’re returning to the discussions after several days of high-flying talks at the large tech conference over how Europe measures up to other countries in the race to introduce fast 5G mobile networks.

MEPs, Commission officials and lobbyists from the tech and telecoms industries tested out gadgets using technology from the internet of things and artificial intelligence that rely on fast internet connections.

Some negotiators steering the telecoms bill said the event, which is expected to have drawn around 100,000 visitors by the time it wraps up on Thursday, was a reminder of why Europe needs a fresh set of rules to speed up its own internet connections and increase companies’ investment in out-of-date telecoms networks.

“Last year it was 5G, and now it’s even more 5G,” Finnish Socialist MEP Miapetra Kumpula-Natri, one lead negotiator, told EURACTIV on the sidelines of the congress earlier this week.

“I definitely thought that I needed to be here and I do not want to make legislation for the past decade,” she said.

Europe is lagging behind the United States and Asian countries in what is seen as a race to make 5G available by 2025.

A chorus of telecoms executives and the top brass in EU telecoms policy used discussions in Barcelona to blame the bloc’s sluggish pace on its struggle to create a common EU-wide policy for selling off radio spectrum.

Telecoms operators argue that they see little incentive to invest more money into building networks to support faster connections because they cannot predict how long their licenses to use spectrum will last, or how much they will need to pay to use the resource.

“If Europe is serious about 5G they have got to come together, the member states, and show the leadership needed to show the environment is right for investment,” said John Giusti, the chief regulatory officer at GSMA, the trade group that organises the Mobile World Congress.

Reminders of Europe’s problem with spectrum came up frequently in Barcelona.

Speakers at panel discussions and tech experts manning their companies’ conference stands complained that European telecoms companies often have more bureaucratic and expensive processes to purchase spectrum than their competitors in the US and Asia.

Ajit Pai, the chairman of the US Federal Communications Commission, announced in a speech at the congress that his agency will auction two spectrum bands in November to speed up adoption of 5G. He said that he wants the US to “lead the world in 5G”. 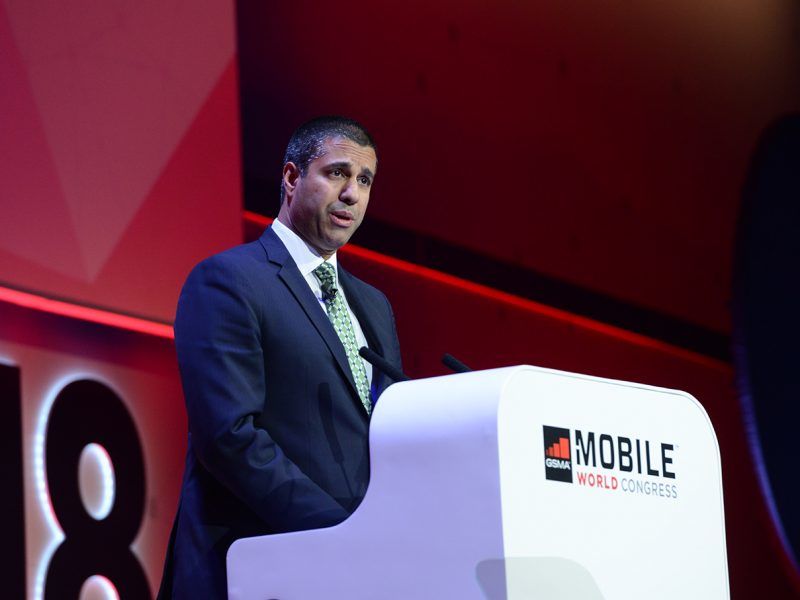 A lot of the debate around net neutrality comes from misinformation but “this baseless fearmongering will simply lose credibility” once it becomes clear that the internet economy has continued to thrive, US telecoms regulator Ajit Pai told EURACTIV on the sidelines of the Mobile World Congress in Barcelona.

The European Commission’s top two digital chiefs, Andrus Ansip and Mariya Gabriel, had little to boast about on spectrum. They got an earful from a group of 11 telecoms industry CEOs, who expressed frustration over squabbling in talks to reform EU spectrum policy during a private meeting on Monday.

National governments have put up a fight against the Commission’s proposal to change the EU’s spectrum rules. They don’t want to give up control over lucrative auctions, which can bring in huge fees to national finance ministries.

When negotiators meet on Thursday, their discussion on spectrum will be sandwiched in between other topics in what is scheduled to be a three-and-a-half-hour long meeting between member states’ diplomats, MEPs and Commission officials. Negotiators do not expect a breakthrough on the hot-button issue yet.

Telecoms ministers from EU countries agreed on a plan to set up fast 5G internet networks by 2025, five years after the European Commission’s original proposal, and snubbed a proposal to reform rules for selling off radio spectrum.

But Kumpula-Natri and Pilar del Castillo, the Spanish centre-right MEP leading negotiations for the Parliament, both said that policymakers will likely be able to agree on measures that would force member states to auction off two bands of radio spectrum that could help operators launch 5G services around the same time in every EU country.

The Commission only recently proposed the measure on the 3.6 and 26 GHz spectrum bands, adding a new bargaining chip to the negotiations. It was not part of the EU executive’s original 2016 proposal.

The new proposal has telecoms operators worried that an agreement that every EU country must auction off those spectrum bands by 2020 may be heralded as a major face-saving victory for the Commission. But tougher, more controversial proposals – in particular one to change how spectrum licenses are sold and another to set up a new oversight procedure controlling national regulators who run auctions – could still lose out to political horsetrading.

“I think that could be an excellent signal to the outside (world) of the strength and determination which the European institutions have to really confront and face the new challenges in the development of 5G,” del Castillo said of the proposal to coordinate auctions of the 3.6 and 26 GHz bands.

Kumpula-Natri said that “it would be a catastrophe” if negotiators do not agree on making those two spectrum bands available for sale.

“For me it seems tailor-made for Europe, it seems quite odd to say now we will not do that,” she said.

But a deal on the 3.6 and 26 GHz bands alone won’t be enough to calm telecoms companies’ nerves.

“Real spectrum harmonisation and longer licenses are the main tool to speed up 5G deployment in Europe and ensure we remain globally competitive,” said Phillip Malloch, the chairman of ETNO, an association representing large operators including Deutsche Telekom and Orange.

The Commission’s 2016 proposal set a 25-year minimum for all spectrum licenses in the EU. The average license for a telecoms operator to use spectrum in the EU is between 15 and 20 years.

Member states’ counter-offer was a rule for licenses to last at least 10 years. That has frustrated the Commission and caused uproar among operators, who argue that the provision might even encourage national regulators to auction shorter licenses for spectrum use that they currently do.

Giusti called the Commission’s plan for 25-year licenses “excellent progress”. But he said “the discussions we’re seeing from the member states and others that would shorten or qualify those is really a step back from where we even are today”.

A spokeswoman for the Bulgarian government, which holds the rotating presidency of the Council of the EU and oversees the bloc’s legal discussions until June, said the presidency “is committed and is focusing its efforts on continuing and finalizing successfully the negotiations with the Parliament by June 2018 as per the timelines set by the European Council in October 2017”.