“Our economy is transforming before our eyes and the world around us is changing faster than ever. And if Europe is to succeed, it cannot afford to fight that transformation,” he said.

“Rather, it must be the first to adapt to it, the first to shape it. And I believe our industry can lead the way.”

And it is an economy in a transformative state. With more than 11 million jobs in the technology industry and growth at 5% in the sector for 2017, within the right policy framework, the EU’s tech industry has the opportunity to take advantage of this momentum.

On Tuesday, Juncker also drew attention to the recent EU-Japan trade deal, which is being highlighted as a game changer in the bloc’s ability to open up global markets.

The deal, which was brokered on Friday (1 February), “will open a new marketplace home to 635 million people and a third of the world’s GDP,” saving European companies €1 billion in duties every year.

However, not all markets are as accessible as they could be. China, for example, has a notoriously protectionist market strategy for technology goods, with global players in the industry kept at the outer edges of the domestic market.

The ongoing US-China trade war that began in 2018 was the subject of further warnings on Tuesday (5 February), after a UN report said Washington’s plans to raise tariffs on Chinese goods in March could have significant ramifications for the global economy.

However, the dispute could also help the EU establish itself in a market heretofore closed off. Tuesday’s UN report states in no uncertain terms: “One effect of the United States and China tensions is to make suppliers in the rest of the world more competitive relative to US and Chinese firms.”

The biggest areas set to ‘benefit’ from the trade war include the industrial machinery sector, where estimates show that of the approximately $33 billion of various machinery that United States imports from China, “about 27 billion would be diverted to third countries.”

In addition, the UN calculates that as a result of the tariffs, “European Union exports are those likely to increase the most, capturing about $70 billion of the United States-China bilateral trade.”

As a result, if the new costs were to come into force, access to the Chinese market could be improved for Europe’s industrial sectors.

Speaking in the context of the current US-China trade war, Chairman of the European Round Table of Industrialists, Carl-Henric Svanberg, said on Tuesday the speed by which Chinese and American industries are able to get products to market is a significant benefit, and also a competitive disadvantage for the EU’s tech industries, who often lag behind in this respect.

As such, EU expansion into wider global markets doesn’t depend only on there being opportunities for market access. Rather, there has to be the infrastructure and capacity of EU industry to respond to new demands with haste.

Moreover, in the context of the current trade dispute, the EU distinguishes itself with its commitment to values and principles, Svanberg said.

“China’s strong growth has led, rightly or wrongly, to America backing off…and Europe is in the middle at risk of being squeezed between these two powers.”

“If America backs off, we [EU] are standing here with our values, our open democracy and human rights, and we need to stand up for these things,” he said.

“Sustainability…is an area where we can take the lead. We can show leadership and it’s an industry where the growth rates are double digit.”

Arancha Gonzales, executive director of the International Trade Centre, agrees. She said the strength of EU leadership in trade depends on the bloc’s dedication to principles and values, which are regarded by many as an attractive asset.

“The good news, in my view, is that Europe has this value-based economic system. The Chinese are also starting to understand that they need to put ‘values’ into their economy.” 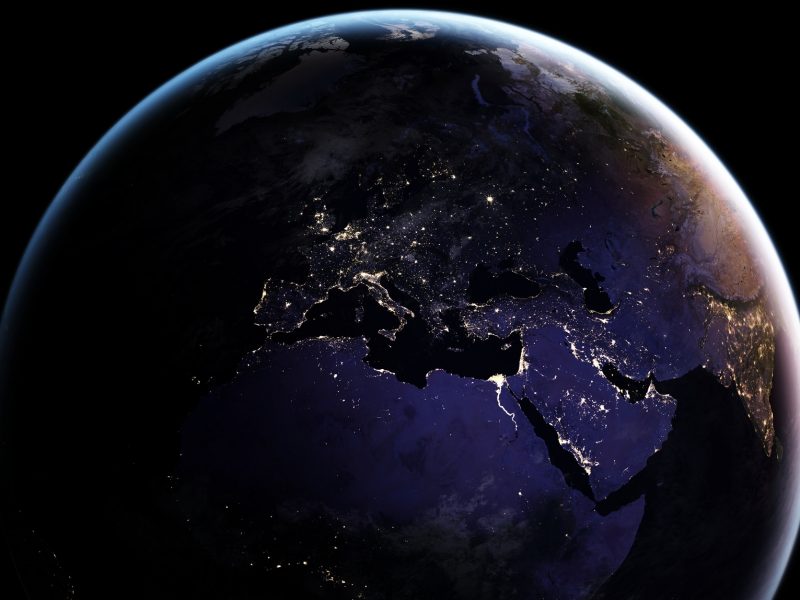 Nonetheless, Gonzalez issued a stark warning. The fate of the EU’s industries, she noted, would depend on the bloc’s ability to substantiate a long-term strategy.

“The bad news,” she continued, “is that the Chinese have a long-term game, and Europe is still operating in the short-term game.”

“If Europe wants to prepare to be strong for the future, it has to take a little bit more of this medium to long term view,” she added.

A leading EU trade organisation has recently recognised this need for industrial visions to be focussed on the long-term.

Orgalim, a body representing the bloc’s technology industries, published their Vision 2030 on Monday (4 February), in which they advocate for, amongst other things, strengthening industries in a global context by safeguarding the long-term leadership of Europe’s industries.

The longevity of EU industry amid testing times will be bolstered not only by funding programmes – of which Horizon Europe is one, planning to put aside €100 billion to foster industrial competitiveness and implement sustainable development goals throughout the EU – but also by an atmosphere of trust and confidence in the internal market.

“The Single Market allows businesses all over Europe to work together to create and market new products free from customs and technical barriers,” Juncker said on Tuesday. “It helps bring down costs, improve the quality of materials and give customers wider choice.”

The European Council have consistently called for a deepening of the single market, allowing for a greater degree of harmonisation and a level playing field in standards.

A resilient single market is indeed one that is further deepened. But in industry, levels of innovation differ wildly across the bloc, resulting in a lack of confidence that undermines the EU’s leadership as a bloc of nations.

The Commission’s 2018 European Innovation Scoreboard, which assesses the levels of innovation of EU members in comparison with global competitors, shows a wide disparity across member states.

Sweden is ranked as the most innovative member state, followed by Denmark, Finland, the Netherlands, the United Kingdom, and Luxembourg. Germany drops down the list, while at the bottom sit nations such as Romania and Bulgaria.

It is disparities such as these that have the potential to compromise the benefits that industry across the EU can garner from a unified internal market.

Juncker’s comments on the rapidity of economic and technological change call for a commitment to ensuring that a harmonised single market is able to equip itself for the future challenges and opportunities created by geopolitical instabilities.

Access to markets can be improved amid this climate, and the EU’s global leadership in the field, bolstered by a resilient and harmonised single market, can take centre stage in an increasingly competitive world, should Europe manage to “adapt and shape” the future of the industry, as Juncker says.