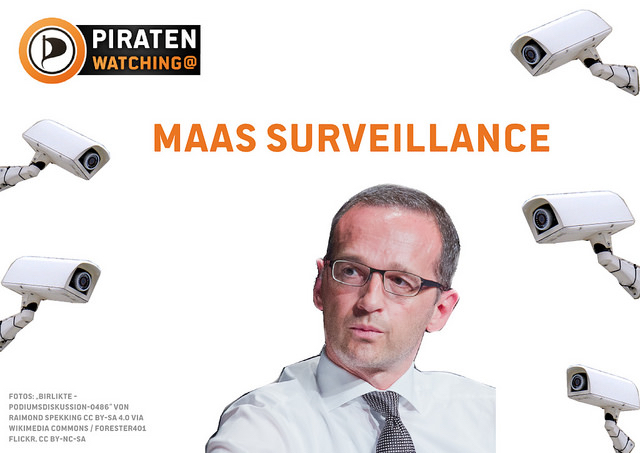 Despite his anti-extremist positions, Maas has been heavly criticised in Germany for advocating data retention. Pirate Party flyer, 2015. [Alex Schnapper]

Facebook has reacted to criticism over its tolerance of hate speech on its site. The American social network giant has said it is interested in an “exchange” with Heiko Maas. EURACTIV Germany reports.

“We understand that at Facebook, we have a particular responsibility and we work hard every day to protect people on our site against abuse, hate speech and bullying,” the company spokesman said on Thursday (27 August).

“We implore people not to use our platform to spread hate speech,” added the spokesperson.

In the last few days, xenophobic content aimed at refugees has been posted on Facebook by right-wing radicals. Germany’s Social Democratic Party (SPD) has so far removed over 150 posts from its Facebook page.

In a letter to the online social network, Maas voiced his concern that certain content which violates Facebook’s community guidelines, such as photos depicting nudity, are removed immediately, yet racist or xenophobic posts are dealt with less rapidly.

During a visit to a school in Heidenau, the Saxony town at the centre of the recent instances of neo-Nazi violence, the SPD politician said that, “Nobody can take a medium such as Facebook seriously, if right-wing extremists are allowed to use it to disseminate ideological rubbish to the world unchecked.”

>>Read: Facebook faces EU and US probes over data harvesting

“If Facebook says that they, obviously, do not want hatred-inciting posts on its site, then it has to remove them,” added the justice minister.

Maas invited representatives of the company to a meeting on 14 September to discuss the issue. Facebook’s spokesperson clarified that the company is interested in an “exchange” with the minister.