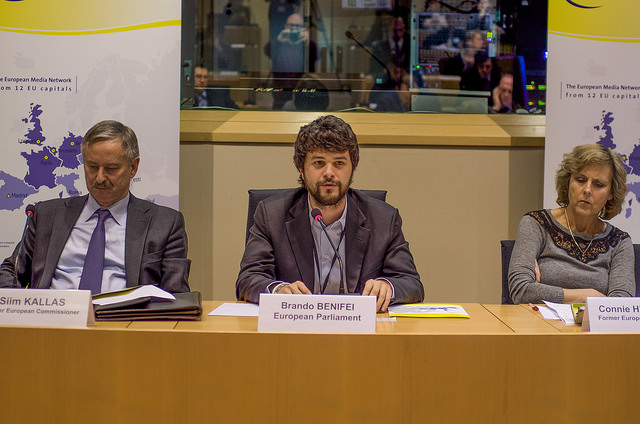 In a discussion on sustainable media sponsored by Fondation EURACTIV #Media4EU initiative, Connie Hedegaard and Siim Kallas both pointed up the need for new technology development in the sector, but Hedegaard also slammed the EU executive’s communication strategy.

The pair were commenting on a six-point strategy paper published by EURACTIV following an initiative originally launched by the Association of European Journalists, at the event, to which  Parliament President Martin Schulz sent a video message.

The ex-Commissioners endorsed proposals for the EU to have a media strategy to assist the sector in dealing with the technology revolution and economic crisis, and to rid the sector of burdensome regulations.

“There should be support for pilots, co-creating in the media sector, the use of Erasmus for training and syndicating,” Hedegaard told the meeting.

Media are still working nationally although decisions are international particularly with new media and young audiences, said the Dane.

The number of Danish journalists in Brussels has halved to ten over the past decade, as against 180 covering the Danish parliament, she claimed, adding: “If the coverage on EU affairs lies with these ten people then the only things they can do is run for the most important events and that can fill their week.”

“Coverage of Brussels needs to be better integrated into the national debates, we need to get away from the idea that Brussels represents “the other” that is a big challenge,” the former Danish commissioner said.

Siim Kallas stated that a strategy was needed to bridge the gap between public opinion at EU level and at member state level.

“There is a gulf between perceptions at both levels and connecting these two spaces,” the former transport Commissioner said.

The real issue lay in the problem of heads of state and government saying one thing in Council meetings and another thing to their national audience, “creating a mythical Brussels”, Kallas added.

Hedegaard also rebuked the communication policies of her former employer, saying that the EU and its institutions are “not very good at communicating, to say the least”.

“Too much is lost in translation, and in thinking that the same press release can serve to deliver a message to the north of Finland as well as the southern tip of Greece,” Hedegaard said.

Both Commissioners strongly opposed another proposal in their strategy document, which endorsed the idea of central institutional funding for Brussels correspondents by the EU.

“Their independence would be severely doubted were that to happen,” Hedegaard concluded.