“This letter is a provocation,” French Finance Minister Bruno Le Maire said, confirming receipt of the announcement by US Treasury Secretary Steven Mnuchin.

France, Britain, Italy and Spain had already sent a reply expressing their desire to agree on “a fair digital tax at the level of the OECD as quickly as possible,” Le Maire said.

“We were a few centimetres away from an agreement on a tax for digital giants, who are perhaps the only people in the world to have benefitted immensely from the coronavirus,” he told France Inter radio.

In January, 137 countries agreed to negotiate a deal on how to tax tech multinationals by the end of 2020, under the auspices of the Paris-based Organisation for Economic Co-operation and Development.

“Absent a multilateral solution, more countries will take unilateral measures and those that have them already may no longer continue to hold them back. This, in turn, would trigger tax disputes and, inevitably, heightened trade tensions,” he said in a statement.

“A trade war, especially at this point in time, where the world economy is going through a historical downturn, would hurt the economy, jobs and confidence even further.”

European countries in particular say the so-called GAFA — Google, Apple, Facebook and Amazon — are unfairly exploiting tax rules that let them declare profits in low-tax havens, depriving them of a fair share of their fiscal payments.

In the meantime, France as well as Britain, Spain, Italy and others have imposed taxes on the largest digital companies.

US officials have slammed the moves as discriminating against American firms, and say any new levies should come only as part of a broader overhaul of international tax rules.

Paolo Gentiloni, the EU commissioner for economic affairs, said Thursday that he hoped Washington’s decision to stop the negotiations would not be permanent. 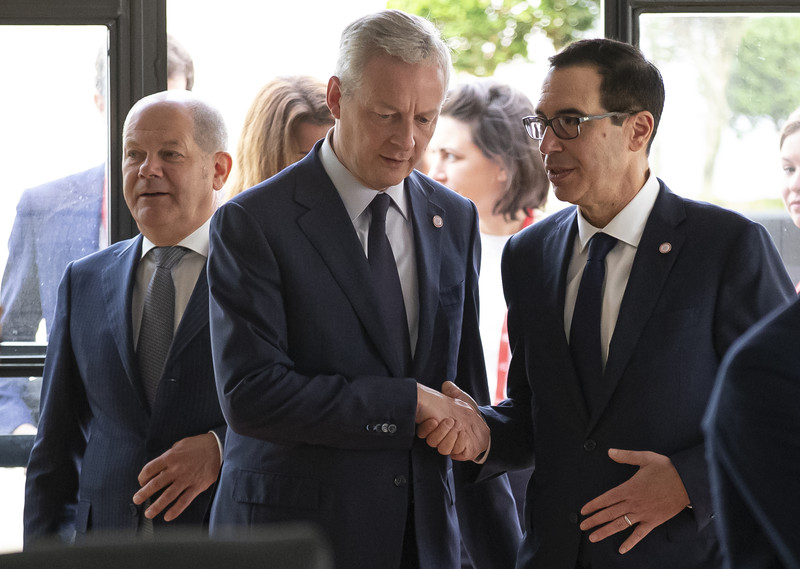 “I very much regret the US move to put the brakes on international talks on taxation of the digital economy,” he said in a statement.

Public pressure has been rising on governments to hold tech firms more accountable for services that have profoundly reshaped societies and become integral elements of economic growth.

Washington has threatened to retaliate against France’s tax with tariffs on the equivalent of $2.4 billion of French goods, though it held off after Paris said it would suspend any collection during the OECD talks.

US Trade Representative Robert Lighthizer did not rule out a multilateral agreement when he appeared before the House of Representatives on Wednesday.

“I think there’s clearly room for a negotiated settlement,” he said. “We need an international regime that not only focuses on certain sides and certain industries, but where we generally agree how we’re going to tax people internationally.”

“The European Commission wants a global solution to bring corporate taxation into the 21st century — and we believe the OECD’s two-pillar approach is the right one,” Gentiloni said.

The “pillars” refer to the two key issues at stake in the talks: how to tax firms that governments do not tax currently even though the firm operates in their countries, and how to ensure that each country gets a fair portion of a multinational’s taxes.

Gentiloni said in the absence of a deal an EU-wide tax would be sought, but that is no sure thing given the bitter opposition of Ireland, which is home to the EU headquarters for several US tech giants, including Facebook and Apple.

Le Maire vowed that if no deal is reached, France will go ahead with its own tax.

“Whatever happens, we will apply the tax on digital giants in 2020, as it’s a question of justice,” he said.

The head of the OECD’s tax policy centre, Pascal Saint-Amans, meanwhile said that the organisation and member countries would continue to elaborate a workable draft deal before the end of the year.

“The US is clearly signalling that they would prefer the elections to be over,” he told AFP.

“This doesn’t stop the other countries from working very actively to show that a solution is within reach and that the problem is the United States,” Saint-Amans said.