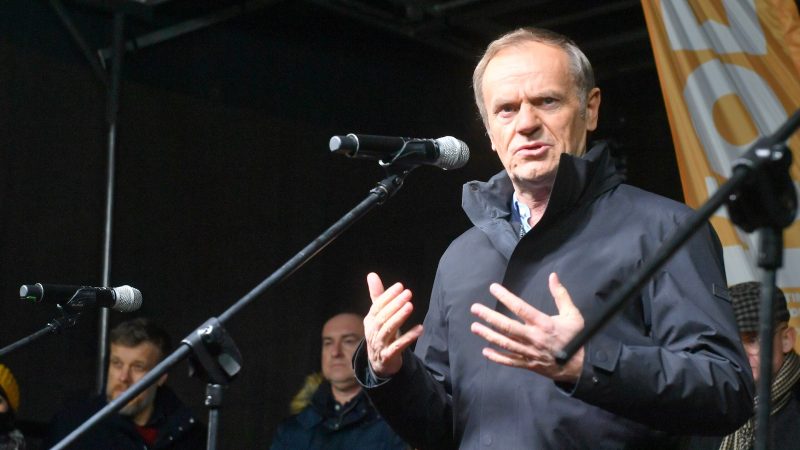 Thousands of people protested outside the Polish president’s palace on Sunday (19 December) against a new media law that critics say is aimed at silencing the country’s main independent news channel.

Many protesters waved EU flags and chanted “Free media!” and “We want a veto!” — asking President Andrzej Duda not to sign the bill into law.

“We need free speech,” said one of the protesters, 38-year-old Emilia Zlotinska. “I would like the president not to sign it.”

At the #WolneMedia protest in Warsaw against #lexTV, the new broadcasting law, which could further restrict media pluralism. Free media are like oxygen. #freemedia, free people, free Poland! pic.twitter.com/8dvy0okcTo

Andrzej Lech, 71, who held up the Polish and EU flags, said the law was “not acceptable”.

“It is my duty to be here… and in every case when our freedom will be in danger,” he said.

Top journalists and opposition figures, including former EU chief Donald Tusk, addressed the crowd, which was illuminated by Christmas lights.

“We are here today in defence of free media. When we stand together in solidarity, we will win. We will sweep away this government together,” said Tusk, who now leads the Civic Platform party.

There were similar protests across Poland.

The bill sought by the right-wing populist Law and Justice (PiS) party government was passed by parliament in a surprise vote on Friday.

The law would prevent companies from outside the European Economic Area from holding a controlling stake in Polish media companies.

That would force US group Discovery to sell its majority stake in TVN, one of Poland’s biggest private TV networks. TVN24 is its news channel.

The government says the law will protect Poland’s media landscape from potentially hostile actors such as Russia.

The US has said it is “extremely disappointed” by the legislation and has urged Duda to veto it.

Discovery has said the law “should alarm any enterprise investing in Poland and anyone who cares about democracy and freedom of the press”.

The PiS party already controls TVP public television, which has become a government mouthpiece, and much of the regional press.

Since PiS was elected to power in 2015, Poland has dropped 46 places in Reporters Without Borders World Press Freedom Index to reach the 64th position.