The EU is considering going ahead with a bloc-wide tax on digital services offered by companies such as Google and Amazon if a global deal to rewrite rules for cross-border taxation is not reached by mid 2021. [Shutterstock]

Forthcoming EU rules to rein in the dominance of the Big Tech giants should include measures to regulate platform giants from accumulating too many users at the disadvantage of smaller competitors, a position paper from France and the Netherlands says.

The document, published on Thursday (15 October), suggests that market failures have arisen in the digital economy stemming from “users’ inability to shop around on the market.”

This occurrence leads to a situation where is it “easier for a platform with a large number of established users to attract more users,” the French and Dutch say, adding that many users of platform services today find themselves ‘locked in’ to that particular service.

Such new EU competition rules, defined in the upcoming Digital Markets Act set to be unveiled by the Commission on December 2, therefore need to address the pressing issue of enhancing competition in this context, and potentially placing restrictions on a platform’s capacity to access users.

“The purpose of these measures would be enhancing competition by regulating access to relevant inputs, users, and online infrastructure,” the French and Dutch say, adding that one particular obligation could be to force platforms to “proactively offer alternatives to users.”

The Digital Markets Act will synthesize fundamental elements of the Digital Services Act, which aims to introduce a regulatory framework for online services, and a New Competition Tool, designed to mitigate structural risks in markets and intervene in situations whereby a market is close to ‘tipping.’

EURACTIV was recently informed that the Digital Markets Act had been conceived by the European Commission due to limits identified with introducing standalone powers as part of the New Competition Tool, thereby highlighting the need to embed competition powers within the Digital Services Act.

More broadly, Thursday’s paper suggests that platforms should be targeted by EU regulatory authorities on a case-by-case basis for specific breaches. This should be accompanied by a general set of ‘obligations and prohibited practices.’

“Besides a principle-based set of obligations and prohibited practices, intervention should also include a flexible and proportionate case-by-case approach by enabling the regulatory authority to impose tailor-made remedies to a structuring platform,” the text says.

Moreover, the paper also cites the necessity of putting forth ‘objective criteria’ in defining the scope of regulatory intervention, “typically relating to the size of the platforms.”

In this respect, the ‘size’ of an organization could correspond to certain parameters such as the number of users, business contracts, market share, or turnover, the paper finds.

Recently leaked Commission documents revealed that the EU executive had been working on a set of ‘blacklisted’ practices that could be imposed on the platform ecosystem as part of the upcoming Digital Services Act (DSA), which is due to be presented on December 2.

As part of the suggestions, platform giants could be prohibited from using the data they collect online unless they make this data available for use by smaller platforms.

“Gatekeepers shall not use data generated and collected on the platform or on any of the gatekeepers’ other services for the purpose of its own commercial activities directed at consumers of the relevant platform unless they are making this data accessible to business users (seeking to become) active in the same commercial activities,” the document states, referring to this specific policy as a ‘prohibition of exclusive use of data.’

In addition, a ban had also been considered on certain ‘self-preferencing’ activities, including a ban on preferential ranking in online search engines or online intermediation services. 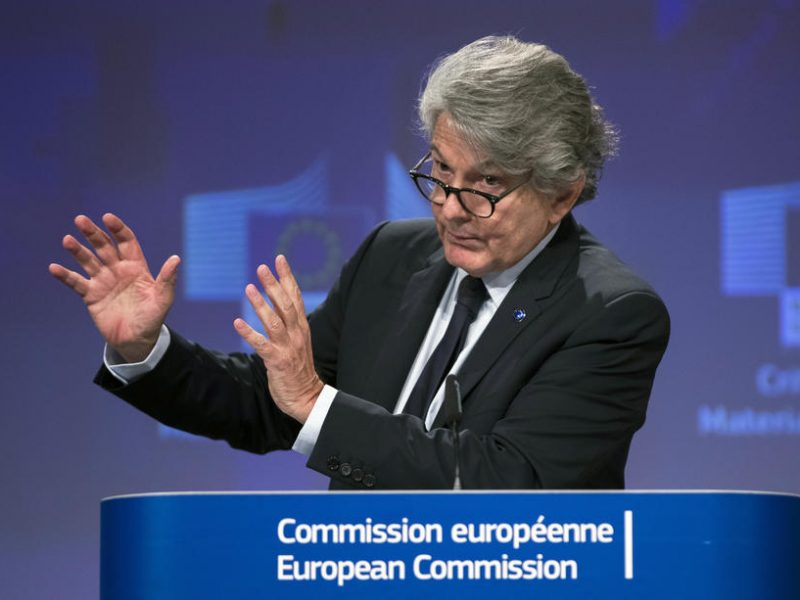 Breton: Online platforms are no longer just 'hosts' in the digital economy

Online platform giants may no longer be defined merely as ‘hosts,’ the EU’s Internal Market Chief Thierry Breton suggested on Monday (28 September), as the bloc is making a concerted effort to regulate the digital economy.