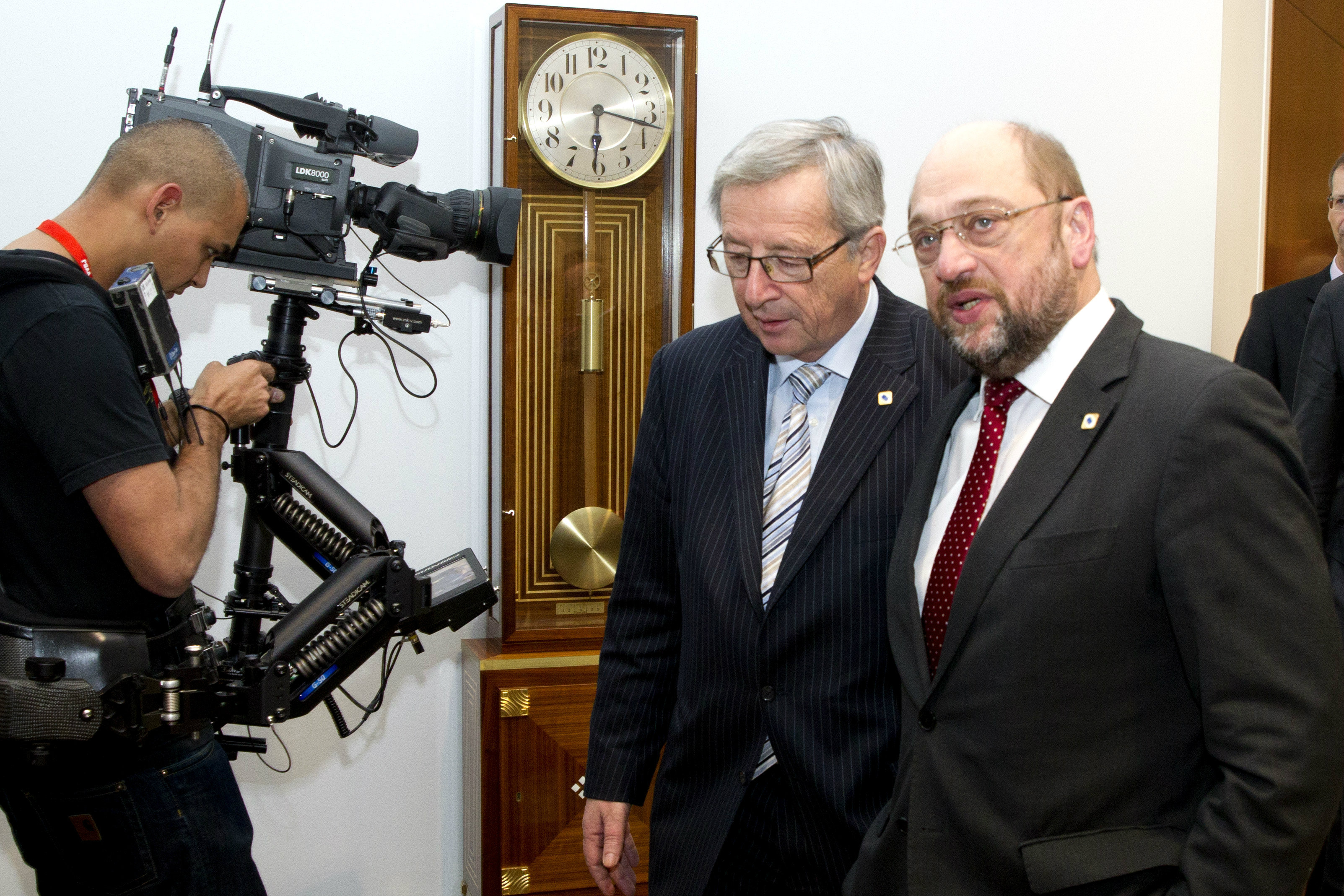 Jean-Claude Juncker (European People's Party) and Martin Schulz (Socialists & Democrats ), will be featured in a one-on-one debate on 20 May, 2014. [The Council of the European Union]

Faced with the rising discontent regarding the lack of media coverage for the EU Commission presidency debates, the French Minister of Culture has sent demands to the French Audio-visual Council. EURACTIV France reports.

Discontent is growing among European politicians and pro-Europeans. Relegated to France Télévision’s website, advocates for televised debates between candidates for EU Commission President are numerous, including the French Minister for Culture and Communication, Aurélie Filippetti.

On 30 April, she appealed to the country’s audiovisual advisory council, the CSA, for the election debate to have a more important place in the programming of French channels.

“I hope that debates on the future President of the European Commission are aired on TV. I have contacted the CSA,” the minister said on Twitter.

Filippetti is not the first to have called on the broadcasting authorities. Green party senators Jean-Vincent Place and André Gattolin also asked the CSA to ensure that the debate is broadcast live by France Télévisions.

After examining the senators’ request, the president of the CSA, Olivier Schrameck, emphasised the importance of the debate. The president of the CSA wrote to his counterpart in France Télévisions, Rémy Pfimlin: “In compliance with the editorial choices that are under your responsibility, the Council wanted to draw your attention to the importance of this debate for the public service of television.”

However, it has no binding effect, as the message was informational and does not highlight a serious lack of any kind, in which case the CSA could back up its demands with threats of punishment. For now, the referral announced by the minister “has not yet been officially received” according to the CSA, which will review the issue of broadcasting the European elections.

According to specifications by a French public broadcasting group, “French and European information and debates” (Article 14) should be covered on a weekly basis.

Furthermore, Article 16 of the specifications explicitly states that France Télévisions “is committed to evoking the European institutions, especially the European Parliament, as well as the achievements, innovations and individual contributions of the different EU member states.”

The issue of the broadcast is controversial for France Télévisions. In a statement on 28 April, the broadcasting company explained that different members of the European Broadcasting Union (EBU) will broadcast the debate in a “logical and rational” distribution of shows and programs.

The group emphasises that the organisation “does not expect the debate to be broadcast on premium channels.” For now, the debate between the five candidates for the presidency of the Commission – Martin Schulz for the socialists, Jean-Claude Juncker for the centre-right, Guy Verhofstadt for the liberals, Alexis Tsipras for the far-left and the José Bové and Ska Keller duo for the Greens – will be available on France Télévisions’s website, and less popular channels like LCP-AN and Public Sénat.

France Télévisions has caused controversy among those of all political backgrounds. In an opinion column titled “France Télévisions should not censor the European debate” pro-Europe MEPs and concerned organisations call for the debate to be broadcast live on France 2. “It is as if the French presidential debate was aired on the website of a public channel,” stated the article.

This initiative follows in the footsteps of the petition “More Europe on TV” launched by the French Sauvons l’Europe (Let’s Save Europe) think thank, and which has been signed by over 10,000 people.

The UMP is also annoyed. “I find it lamentable that our public channels make no effort” said Jean-Pierre Audy, President of the French Delegation of the centre-right EPP group in the European Parliament. “If you do not have a debate, there will be no listeners!” he continued, criticising France Télévision’s reasoning based on viewing figures.

The problem of European media coverage is nothing new. “We are way behind in terms of European information” claimed a French centre-right MEP, Philippe Juvin, “when we are in plenary session in Strasbourg, nobody in France is knows.”

The debate will be broadcast by public channels in other EU member states (ORF 3 in Austria, RTBF in Belgium, and Rai News 24 in Italy). Croatia and Spain have devoted up to five regional and national chains to broadcast the debate.

A similar problem exists in Germany, where a petition has been launched by the Young European Federalists for the debate to be broadcast on a national German channel.

Other EU member states like Solvenia or Cyprus have yet to declare their intentions, but the EBU told EURACTIV that the list of broadcasters will “probably expand”. Finally, the debate will be broadcast in two unlikely countries: Ukraine and, perhaps more surprisingly, Canada.

The debate, which will take place on 15 May in the European Parliament in Brussels and hosted by the European Broadcasting Union, will be aired on primetime in many of EU national channels.

European parties’ single candidates for the next European Commission presidency face each other in five televised and one radio debate in the weeks preceding the EU elections on 22-25 May. The debates aim to galvanise attention on mainstream parties and possibly boost turnout.

Apart from Martin Schulz and Jean-Claude Juncker, the debates will involve (depending on the setting) the liberal candidate Guy Verhofstadt, the two Green candidates Ska Keller and José Bové and the candidate of the Party of the European left Alexis Tsipras.

The debates with at least four candidates are held in Florence, Maastricht and Brussels, while the two frontrunners also debate in Brussels, Hamburg and Berlin. The European Broadcasting Union (EBU), the alliance of public service media across Europe, is organising a debate at the European Parliament in Brussels on 15 May, dubbed #TellEUROPE.