Developing digital competencies across the EU as well as promoting gender equality in the bloc’s digital economy are two key areas that the European Commission will seek to foster as part of the forthcoming revamped Digital Education Action Plan, the EU’s Innovation and Research Commissioner Mariya Gabriel has said.

Her comments come following the publication of a series of datasets by the European Commission, which reveals startling gaps in digital skills as well as competencies in Science, Technology, Engineering, and Mathematics (STEM) in Europe across genders, ages, and geographical locations.

The EU’s Digital Education Action Plan, which the Commission will present in September this year, will seek to address some of those problems, alongside the recently unveiled European skills agenda.

“The overall objective will be to close the digital skills gap and make digital literacy a reality for all,” Gabriel said on Monday (13 July), referring to the Digital Education Action Plan.

“Inclusion in general and gender equality, in particular, are guiding principles, and will have a prominent place in the action plan,” Gabriel added, speaking as part of a EURACTIV event examining the clout of Europe’s STEM landscape.

“I will promote gender balance in digital and stem studies and careers. I want to see more girls and women improve their skills in areas like artificial intelligence, for example,” Gabriel said, calling upon participants of the event to submit their feedback to the Commission’s objectives in the field of digital education to the ongoing public consultation, which is ongoing until 4 September 2020.

As part of recently published figures in the European Commission’s Digital Economy and Society Index, it transpired that there is a distinct shortage of women working in Europe’s technology industries, particularly in ICT.

There are also wide disparities across EU member states in this field. The country with the highest percentage of women working in ICT is Finland with just over 3%, while the lowest is Latvia, with less than 0.5%. 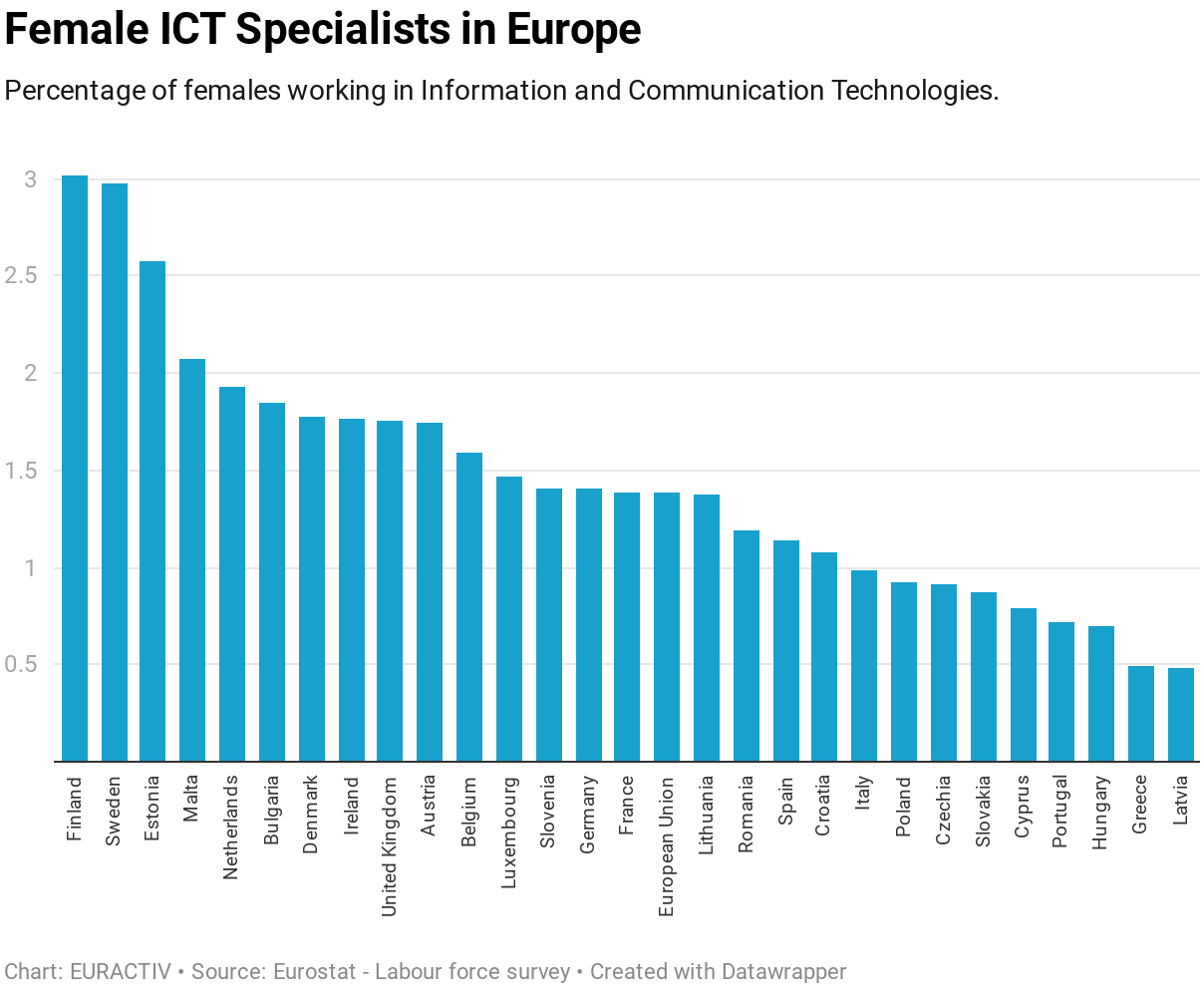 More broadly, Commission Vice-President Margaritis Schinas has also recently commented on the importance of bolstering skills across digital fields in the context of the lessons learnt from the coronavirus, saying that the Digital Education Action Plan will aim to “harvest the new interest in digital skills that was so reinforced during the pandemic.”

At the beginning of July, the EU executive laid out ambitious new goals for upskilling and reskilling the bloc by 2025, including the objective of ensuring that 70% of the EU adult population has basic digital skills.

The announcement followed the recent publication of the Commission’s Digital Economy and Society Index, which found that a large part of the EU population “lacks basic digital skills, even though most jobs require such skills.”

Moreover, the Commission also recently published its innovation scoreboard, which found that particularly innovation-friendly environments in terms of human resources were well supported by a commitment to educational initiatives at the tertiary level.

In this vein, the July Skills Agenda introduces twelve actions that the Commission hopes to coordinate with member states, industry groups, and social partners to “place skills at the heart of the EU policy agenda,” as a means of charting recovery from the coronavirus pandemic.

Generally, such actions include fostering skills to support the green and digital transitions, increasing graduates in science, technology, engineering and mathematics subjects, and introducing a new Europass platform.

On publication of the Skills Agenda, Nicolas Schmit, Commissioner for Jobs and Social Rights, said that there are “hundreds of thousands” of job vacancies that can’t be filled because European don’t have the right digital skills.

“We want to enhance the possibility of intensive digital training,” Schmidt said, adding that the Commission is actively seeking the input of industry players. 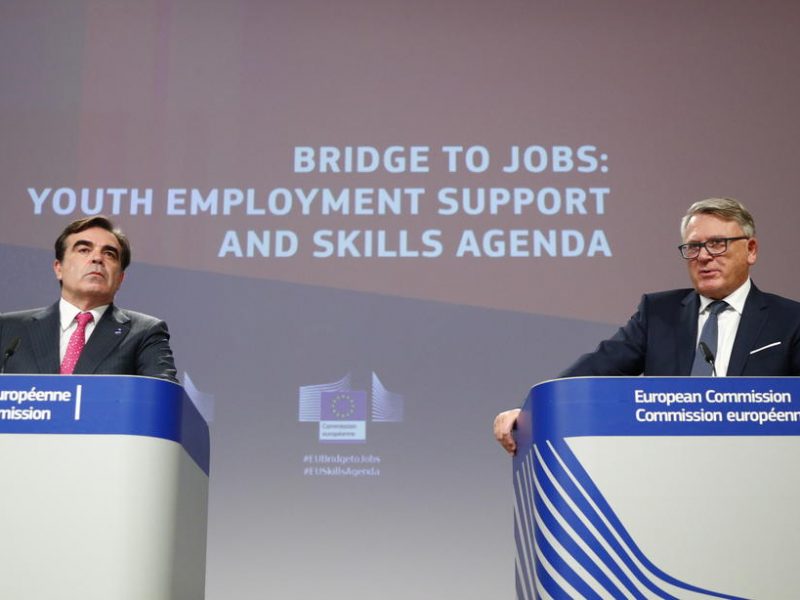 Up until now, consecutive studies have revealed shortfalls across the EU’s education landscape in terms of STEM skills, particularly when it comes to women.

In this vein, a report produced in April for the European Parliament’s Women’s Rights and Gender Equality Committee noted that the picture continues to be gloomy for women, stating that female participation in STEM “throughout all levels of tertiary education still lags behind that of males.”

“A core concern here is that the dominant, masculine cultures in higher education institutions are reproduced by means of bias intervening in search committees and hiring decisions,” the report states, adding that in terms of employment, the “gender gap concerning AI and cybersecurity is the largest among all digital technology domains.”

Speaking as part of Monday’s panel, the Commission’s Michael Horgan, Policy Officer for Skills and Qualifications at DG Employment, noted how the measures would specifically seek to nurture growth in Europe’s STEM landscape.

“In the new skills agenda, we will explicitly contribute to the increase of STEM graduates by raising attractiveness of STEM studies and careers, particularly focusing on attracting girls and women,” Horgan said, adding that the Commission will also address the importance of fostering digital skills.

“As we know, nearly 90% of jobs require digital skills but we have 40% of Europeans that still lack basic digital skills, according to our digital economy and society index,” he said.

These are welcome words for industry players. Alexa Joyce, Director, Education Policy for Teaching & Learning at Microsoft fully backed plans in this field on Monday, and drew on the experience of the coronavirus to highlight the importance of digital skills for the future.

“What we’re seeing right now across Europe is a recognition that to provide digital education, and particularly when we’re thinking about hybrid and remote learning contexts in the situation of COVID, we do need to invest massively in getting more technology in the hands of students,” she said.

“That challenge is something that we need within the education system to address more broadly, to get broader access to technology,” she said.