Gabriel told EURACTIV that she will present a detailed set of steps at the meeting on extending the EU’s ban on mobile roaming charges to Macedonia, Serbia, Montenegro and Bosnia and Herzegovina. The Commission’s legal advisors are currently preparing the plan.

Bulgaria will host a summit on EU-Western Balkan relations on 17 May in Sofia. The country will oversee member states’ discussions on EU legislation when it takes over the six-month, rotating presidency of the Council of ministers in January.

A law went into effect in June to force telecoms companies to stop charging roaming fees for consumers traveling between countries in the EU.

But Gabriel wants to temper expectations about how many years it could take before such an agreement might go into effect.

“For me, it’s really important not to create expectations that are not feasible and not realistic. For the European Union, that has taken 10 years.

“Definitely we need to do something more. But let’s keep calm and do it very seriously because the expectations in the region are huge,” she said.

Gabriel told EURACTIV she will “very soon” announce “at least two other very concrete pilot projects” on digital policies in the Western Balkans. She did not elaborate further on what the projects will address or what countries will be involved. 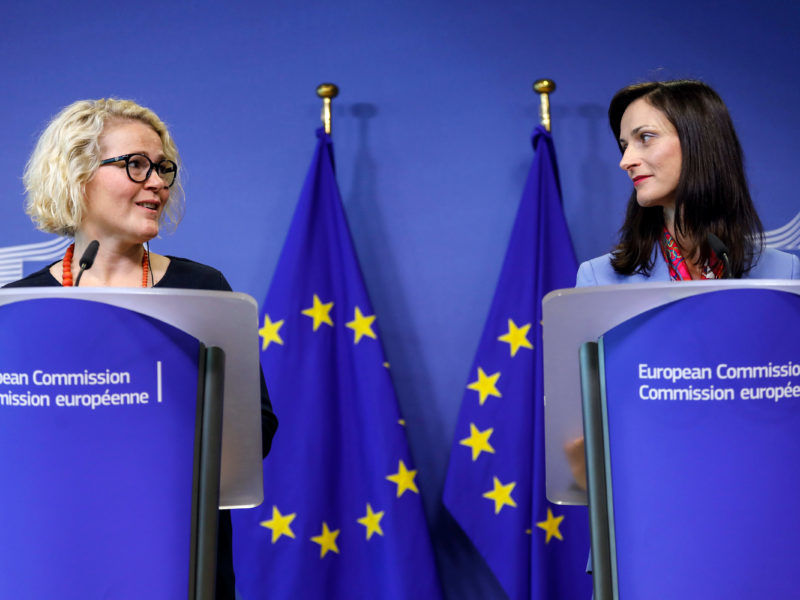 Companies can face penalties if they continue to charge consumers roaming fees within the EU.

Telecoms firms that opposed the EU-wide ban on roaming charges will likely be upset by the plan to extend the rules to countries outside the bloc.

Gabriel became Bulgaria’s representative in the college of EU Commissioners in July. She was a centre-right MEP before Commission President Jean-Claude Juncker appointed her to take over the executive’s digital policy portfolio.

The EU digital chief said she first proposed extending the ban on roaming fees to the Western Balkan countries in July.

Bulgaria has named “promoting the digital policies of the EU among the countries in the Western Balkans through gradual reduction of roaming charges and by increasing the possibilities for broadband internet access” as a priority for its six-month role leading negotiations in the Council of ministers.

The Bulgarian Council presidency listed educating young people, and securing decisions between member states on draft EU laws on telecoms, copyright, cybersecurity and the so-called ePrivacy regulation among its other digital policy priorities.

A spokesperson for Bulgaria’s foreign ministry said the plan to get rid of roaming fees between the EU and the Western Balkan countries will “enhance connectivity in the Balkans, which will make the region more stable and competitive”.

Similar agreements within the region are “first steps” towards an expanded agreement with the EU, the spokesperson said.

Bulgaria and Macedonia decided in November to reduce the price of roaming fees for consumers traveling between the two countries. That price reduction will affect phone calls, text messages and mobile data use and is expected to go into effect in March, according to Bulgaria’s foreign ministry.

Bulgaria will sign off on lowering roaming charges with Serbia, and is negotiating similar arrangements with Montenegro and Albania, the foreign ministry spokesperson said.

In 2016, Montenegro, Serbia, Bosnia-Herzegovina and Macedonia agreed to require companies to reduce roaming fees for consumers traveling between the four countries.

Montenegro, Serbia, Bosnia-Herzegovina and Macedonia signed an agreement in Budva on 29 September, reducing roaming prices based on the EU model. BETA/EURACTIV Serbia reports.