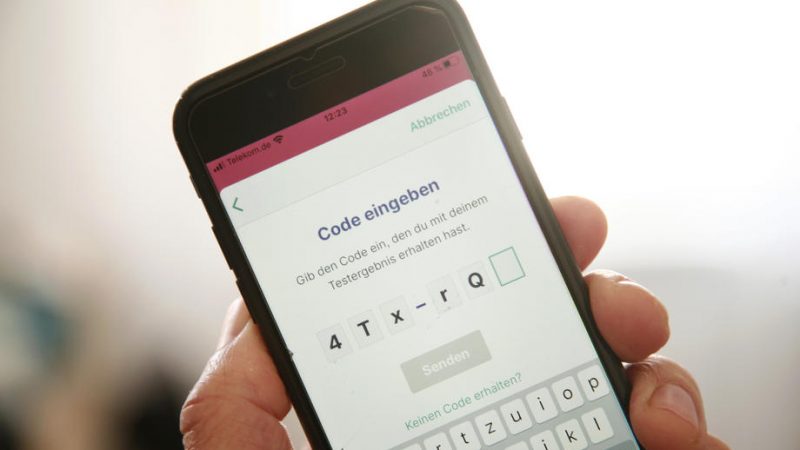 An Apple iPhone running a test version of the 'Next Step' smart phone app using Decentralized Privacy-Preserving Proximity Tracing (DP-3T) to trace COVID-19 infections, in Darmstadt, Germany, 26 April 2020. According to media reports, Germany has changed its course in the debate over a coronavirus tracing app, favoring decentralized data storage over a centrally managed server. The DP-3T app, which is developed as part of an international consortium is based on the Bluetooth Low Energy standard. [EPA-EFE/BEN WENZ]

Germany changed course on Sunday (26 April) over which type of smartphone technology it wanted to use to trace coronavirus infections, backing an approach supported by Apple and Google along with a growing number of other European countries.

Chancellery Minister Helge Braun and Health Minister Jens Spahn told the Welt am Sonntag newspaper that Berlin would adopt a ‘decentralized’ approach to digital contact tracing, in so doing abandoning a home-grown alternative.

Nations are rushing to develop apps to assess at scale the risk of catching COVID-19, where the chain of infection is proving hard to break because the flu-like disease can be spread by those showing no symptoms.

In Europe, most countries have chosen short-range Bluetooth ‘handshakes’ between devices as the best approach, but have differed over whether to log such contacts on a central server or on individual devices.

Germany as recently as Friday backed an initiative called Pan-European Privacy-Preserving Proximity Tracing (PEPP-PT), whose centralized approach was criticized by hundreds of scientists in an open letter last Monday as opening the way to state surveillance.

“We will back a decentralized architecture that will only store contacts on devices. That is good for trust,” Braun told ARD public television in an interview.

Although Bluetooth-based smartphone contact tracing is an untested technology and early results in countries like Singapore are modest, its development is already redefining the relationship between the state and individual.

It would work by assessing the closeness and length of contact between people and, should a person test positive for COVID-19, tell recent contacts to call a doctor, get tested or self-isolate.

One of the members of PEPP-PT, Germany’s Fraunhofer HHI research institute, was told on Saturday that it was being taken off the project, correspondence seen by Reuters showed.

“The project will be handed over and others will be able to make use of the results we have achieved so far to build a decentralized solution,” Fraunhofer HHI head Thomas Wiegand said in a message to colleagues.

Germany’s change of tack would bring its approach into line with that taken by Apple and Alphabet’s Google, which said this month they would develop new tools to support decentralized contact tracing.

Importantly, Apple’s iPhone would under the proposed setup only work properly with decentralized protocols such as DP-3T, which has been developed by a Swiss-led team and has been backed by Switzerland, Austria and Estonia.

Health authorities are keen to get insights into the spread of infection and make use of digital contact tracing to support existing teams that work phones and knock on doors to warn those at risk.

Backers of DP-3T, short for Decentralised Privacy-Preserving Proximity Tracing, say it is still possible for users to opt in to sharing their phone number to aid contact tracing – but this would be part of an app, not of the system architecture.

And although using Bluetooth means the location of an infection event cannot be known to the authorities, it would still be possible for users, by opting in, to share epidemiologically useful data under a decentralized approach.

DP-3T said in a statement that it is was “very happy to see that Germany is adopting a decentralized approach to contact tracing and we look forward to its next steps implementing such a technique in a privacy-preserving manner.”

PEPP-PT said it planned to issue a statement in due course.

The Fraunhofer HHI institute did not immediately respond to a request for comment.