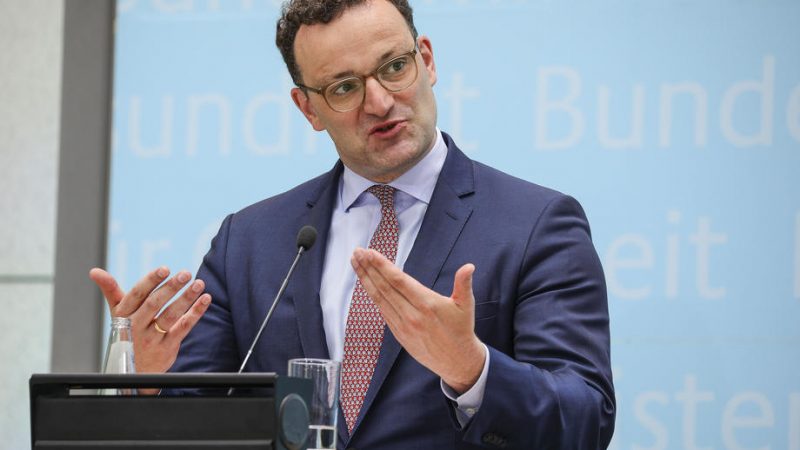 After delays to ensure the bluetooth technology would work at the correct distance, the government says the app will be a vital tool to help avoid a second wave of infections.

“It’s coming this week,” Spahn told ARD television, but he declined to confirm German media reports that the app would be launched on Tuesday.

The app uses bluetooth short-range radio to detect and contact people at risk of infection by coronavirus and does not rely on a centralised database. Deutsche Telekom and software company SAP are involved.

Spahn urged people wishing to go on holiday after European border controls are eased on Monday to be careful and ask themselves whether their trip was necessary.

On Monday (15 June), Germany lifts its blanket travel warning for European Union nations and Britain, and will replace it with specific travel advice for individual countries and regions.

“We need the right balance,” Spahn said, adding that recent outbreaks in Germany after mass gatherings and church services had caused a rapid spread of the virus.

Thanks to large-scale testing, a robust health system and lockdown measures introduced in mid-March, Germany has kept the number of deaths from COVID-19 relatively low compared to other countries despite a large number of cases.

For their part, the Italians launched their own app recently, as privacy fears around the use of the technology started to ease. Italy was the first major European country to roll out a smartphone app to trace COVID-19 infections that does not rely on a centralised database

The government, like those of other European countries hit by the virus, is touting the software as a vital tool to help avoid a second wave of infections. Germany launches its own version next week.

“We want a summer in which tourism is as safe as possible. This app can help us resume activities after the lockdown,” Technological Innovation and Digitalization Minister Paola Pisano told Reuters.

Italy was the first European country to be hit hard by the coronavirus and has suffered more than 34,000 deaths. A lockdown drove infection rates sharply lower, but fears remain of a renewed flare-up later this year.

The government’s call for a tracing app originally met resistance from privacy advocates and opposition politicians, but many Italians are warming to it.

“Even my in-laws downloaded it,” said Daniela Camozzi, 47, in Sarzana, a town in the northern Liguria region, one of the first parts of the country where the app went live.

“I don’t get all this concern about privacy. Every time we use our smartphone our data is profiled much more massively than this app can.”

The app has so far been switched on in just four regions, accounting for 8 million of Italy’s 60 million people. The authorities hope to sustain the enthusiasm when it has its countrywide launch later this month.

Called Immuni (immune), the app uses Bluetooth short-range radio based on a joint technology standard from Apple and Google to log close contacts securely on the device. It was developed by a Milan tech start-up, Bending Spoons.

In the case of a positive coronavirus test, the doctor uploads the result anonymously onto a server, and a notification is sent to people the holder has encountered. It advises them to call a doctor, self isolate and seek a test.

Italy’s adoption of this ‘decentralised’ approach is in line with a growing number of European countries, including Switzerland, Germany and Austria. Their common approach could later support a ‘roaming’ function for foreign travel.

France, meanwhile, launched an app last week that stores data on a central server – an approach which is not supported by Apple on privacy grounds and works poorly on iPhones.

Stefano Denicolai, a member of Italy’s COVID-19 task force, said Immuni could help break chains of infection if 25% of Italians download it, provided they are concentrated in key locations and social sectors of the population.

It remains to be seen if the app’s early popularity will be sustained as it is rolled out more widely. Right-wing opposition leader Matteo Salvini is still withholding support: “Until there is a total guarantee on privacy protection I won’t download anything at all,” he said.