Even though Gazprom has been hit by EU and US sanctions, it is still more transparent than Apple, Amazon or Google, according to a new report. [Martin Griffiths/Flickr]

Google, Amazon, and Apple are among the least transparent multinationals in the world, worse than Russian state-owned energy companies Gazprom, and Rosneft, according to a report published today (5 November) by anti-corruption campaigners.

The US tech giants scored less than three out of a possible ten in the Transparency International ranking, which rates the 124 firms on the Forbes list of the world’s largest publicly traded companies.

Transparency International, an influential, global civil society organisation, said 90 of the companies on the list do not disclose taxes paid in foreign countries. 54 of the multinationals, together worth more than US$14 trillion (about €11.2 trillion), give no information on their revenues in other countries. The information is needed, especially in developing countries, to ensure companies are paying the taxes they should, where they should.

Multinationals are marked on their reporting of overseas financial information, data about their subsidiaries and holdings, and disclosure of their anti-corruption measures. The final score is an average of the three factors taken into account.

Seven of the best performing multinationals are from Europe. Italian oil and gas company Eni came top with 7.3, followed by the UK’s Vodafone (6.7). The worst are from China, with the Bank of China propping up the list with a single point.

IBM got 2.9, with Apple taking 2.7, the same as Visa, Petrochina and US banking and financial services corporation Citigroup.

Google scooped just 2.2 out of ten. But Amazon had with just 2 points, putting it on a par with the communist-owned Industrial and Commercial Bank of China and China Shenhua Energy Company.

That was still better than the lowest ranked US multinational, Berkshire Hathaway. The holding company, whose CEO and largest shareholder is Warren Buffett, scored just 1.6 points.

Russian oil behemoth Rosneft nabbed a comparatively respectable 4.2, while Gazprom got 3.5, the same score as Microsoft.

In the chart below, showing the 13 worst performers, the first coloured column represents anti-corruption programmes, the second organisational transparency and the third country-by-country reporting. 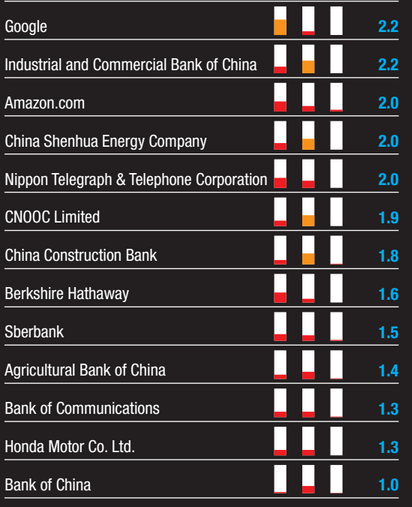 Bottom of the class. The 13 lowest scoring multnationals. [Transparency International]

EURACTIV has asked Google, Amazon and Apple for comment and will update the story when they are received. A spokesperson for Japan’s Nippon Telegraph and Telephone Corp, which was also among the bottom ten, told Reuters, “We want to continue to work towards appropriate disclosures.”

Amazon, Apple and Google are being investigated by European Commission over their tax arrangements in EU countries such as Ireland, the Netherlands, and Luxembourg. Antitrust officials will decide whether preferential tax arrangements made with governments is illegal state aid.

State-owned gas giant Gazprom has been accused of acting as an extension of Russia’s political influence. Russia’s gas export monopoly Gazprom sells its gas to EU clients under secretive bilateral deals. By increasing prices or threatening to turn off the taps, it has played a high-profile role in the Ukraine crisis.

Both the EU and US imposed sanctions on Gazprom in September, after stopping short of doing so in July. Rosneft, the state-owned oil company was also hit by western sanctions.

The world’s biggest oil, gas and mining companies will not be ready for transparency and anti-corruption rules entering into force across the EU from 2015, the report, Transparency in Corporate Reporting, said.

Extractive companies must report payments such as taxes to governments on a country-by-country and project-by-project basis under the new Accounting Directive.

The law will apply to large companies registered in the EU and listed on EU stock exchanges. The US equivalent, part of the Dodd-Frank act, is delayed by a lawsuit.

Of the 24 extractive companies in the report who would fall under the new EU and US rules,19 disclose tax payments and revenue in less than half the countries where they operate.

Only BHP Billiton, Statoil and Indian firms ONGC and Reliance disclose tax payments in almost all the foreign countries where they operate.

The 13 UK companies in the report performed strongly in reporting on anti-corruption. They all publicly commit to compliance with anti-corruption laws and have whistleblowing measures as well as either codes of conduct or anti-corruption policies applying to all employees.

The UK’s tough Bribery Act, in force since 2011, is credited with driving the strong British performance. But only three British companies, Statoil, Telefónica and Vodafone score above 50% for country-by-country reporting, disclosing tax payments in almost all the countries where they operate, though not all financial data. 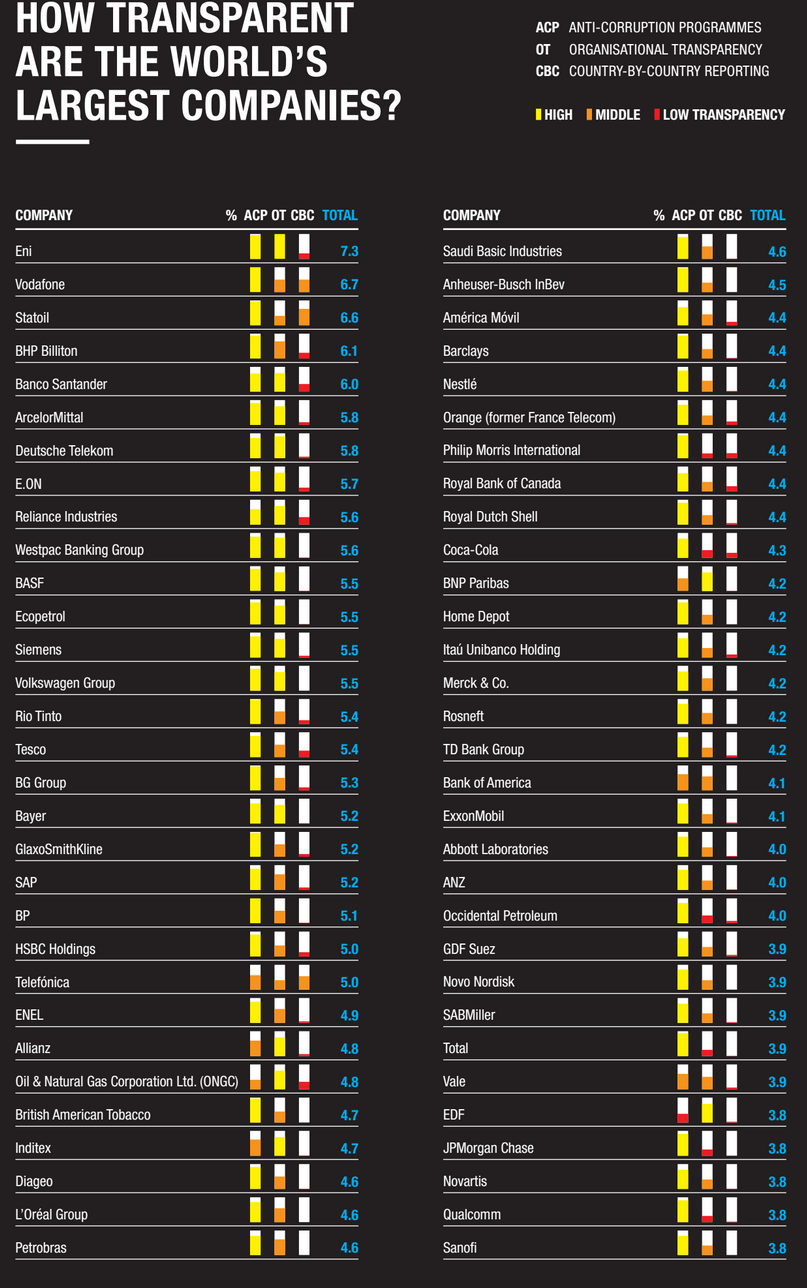 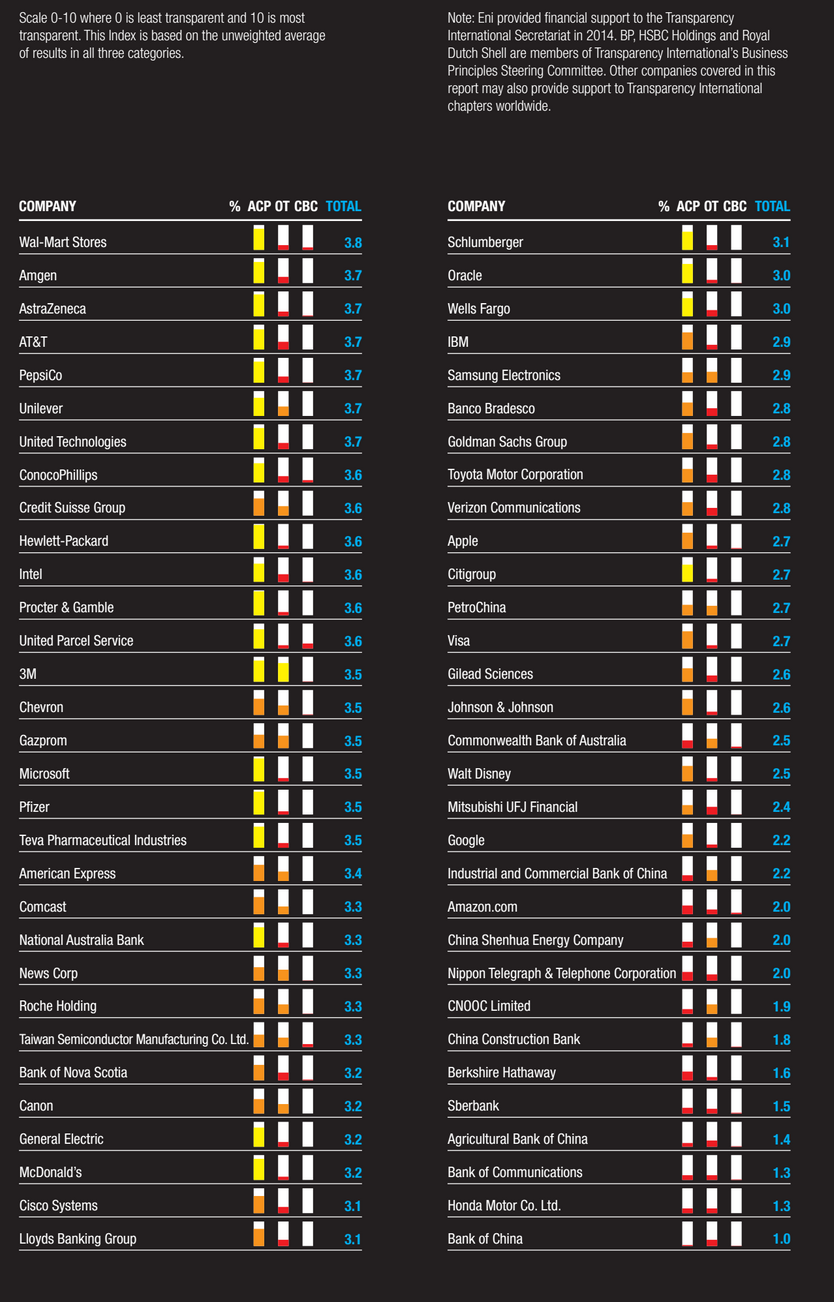 Transparency International is a civil society organisation in more than 100 countries, which campaigns against corruption. It has ranked the the 124 firms on the Forbes list of the world’s largest publicly traded multinationals on how transparent they are.

Seven of the best performing multinationals are from Europe. Italian oil and gas company Eni came top with 7.3, followed by the UK’s Vodafone (6.7). The worst are from China, with the Bank of China propping up the list with a single point.

Amazon, Apple and Google - currently being investigated by the European Commission for their tax arrangements with Irteland, Luxembourg and the Netherlands - were judged to be less transparent than Russian energy giants Gazprom and Rosneft.  The two state-owned companies were hit by EU and US sanctions in September.