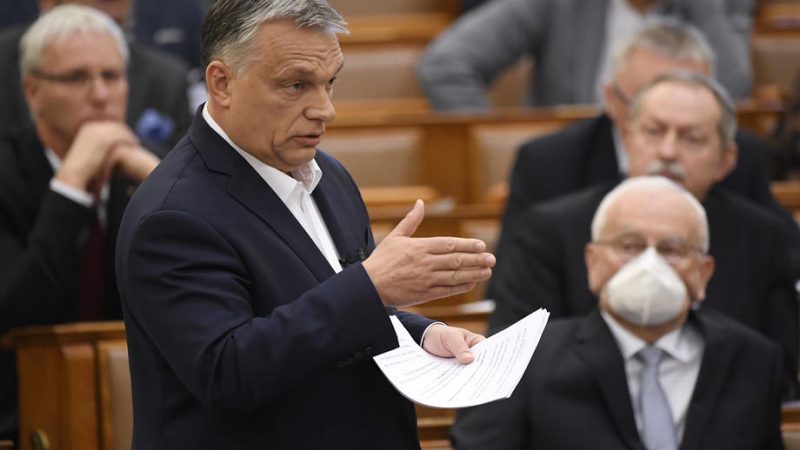 Hungarian Prime Minister Viktor Orban delivers his speech about the current state of the coronavirus during a plenary session in the House of Parliament in Budapest, Hungary, 23 March 2020. [EPA-EFE/Tamas Kovacs]

The new measures, announced on Monday (4 May), include the suspension of the rights to access and erasure of personal information, and those who lodge a complaint or exercise their right to a judicial remedy will also have to wait for the proceedings to start until after the government proclaims an end to the state of danger.

The decree also relaxes the obligation of authorities to notify individuals when collecting personal data, when certain authorities act with the purpose of “coronavirus case prevention, recognition, exploration, as well as prevention of further spreading.”

In this vein, strict notification requirements are to be replaced with general information published electronically and made available about the “purposes, legal grounds, and scope” of processing.

In response, opposition politician Bernadett Szél said she will turn to the Hungarian Constitutional Court.

“Restricting data rights is unnecessary and disproportionate, and furthermore does not help, even hinders the fight against the epidemic,” Szél said in a statement on Tuesday (5 May).

“In times of the epidemic, there is a fundamental public interest in rapid provision of information.”

“With the regulation, under the pretext of an epidemic situation, they may access any of our personal data and information regarding the processing of such data is suspended,” Szél added.

The decree also suspends and modifies certain provisions of the Hungarian freedom of information law, increasing the time authorities can take to respond to a request, resulting in what critics claim could be a three-month waiting period for those attempting to access public data.

“Due to the opacity of government decision-making and the government’s relationship with the public, data already had to be fought for,” said Szél. “Now they even legalise the withholding of public interest information.”

Most modifications to the freedom of information law and the GDPR [General Data Protection Regulation] will remain in force until the end of the state of emergency declared on 11 March, a date which is in the hands of the Hungarian government.