Inside Portugal’s bid to become a ‘startups factory’ 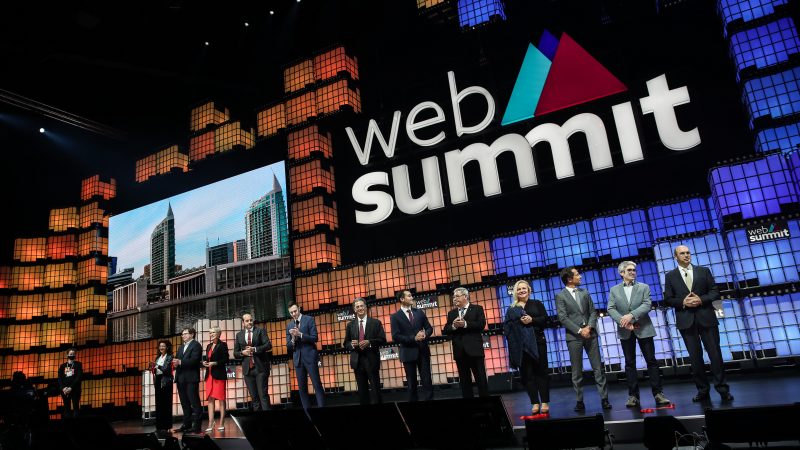 Portuguese Minister of State for the Economy and Digital Transition Pedro Siza Vieira (R), Policy Officer Digital Innovation at European Comission Eoghan O'Neill (2R) and members of the European Startups Nations Alliance during the official launch of the alliance on the third day of the 2021 Web Summit in Lisbon, Portugal, 03 November 2021. [EPA-EFE/MARIO CRUZ]

On Wednesday (3 November), Portugal’s Economy Minister Pedro Siza Vieira announced the launch of the Europe Startup Nations Alliance (ESNA), a new entity that will support 26 EU countries and Iceland in creating domestic conditions for the flourishing of startups.

Just the day before, Vieira also announced the expansion of Portugal Tech, the government’s investment programme, to fund Portuguese startups with an additional €250 million.

“We are putting the money where our mouths are,” boasted Ricardo Mourinho Félix, vice-president of the European Investment Bank, which co-finances the programme.

The announcements took place during the Web Summit, a four-day annual event that gathered more than 40,000 participants. The flagship event has been held in Lisbon since 2016, also thanks to the co-financing of the Portuguese government. All these initiatives are part of an explicit push to boost the country’s tech sector.

“The tech scene in Portugal has been improving in the last five years due to a lot of support from the government,” Marta Felix, CEO and founder of Biocosmos, told EURACTIV.

Lisbon, in particular, has the ambition to become a ‘unicorn factory’, in the words of its recently elected mayor, Carlos Moedas, a former EU Innovation Commissioner, whose speech at the summit struck a chord among tech entrepreneurs.

“We loved it. It really hit every key button of the innovation culture, the support of entrepreneurs, the low cost, low taxes, ease of doing business,” said Nicholas Gorman, CEO of SafeScore, a provider of online travel information.

Gorman’s startup is based in Ireland but is now considering opening a branch in Lisbon, following “very successful talks” with the minister of tourism.

Playing in Portugal’s favour is a combination of factors, including its location in Europe, but with affordable prices.

“It would take us ages to go to Canada, let’s say, and a country like the Netherlands is super expensive for us. So, it made much sense to be here,” said Gazelle Motia, an Iranian who works with fellow compatriots at Adhoc School.

Another reason for startups to move to Portugal is that the temperate climate and good living standards are appealing for the tech workforce, an increasingly scarce resource.

“We asked the developers where they wanted to live, they said in Portugal, so we came here,” explained Michel Paolucci, who is in charge of business development at 01talent, a startup initiated by French nationals.

Beyond attracting companies and talent, Portuguese themselves are increasingly active in the tech sector, starting their own companies or learning programming languages.

“We are great techies, we know how to tackle technology. What we miss is a little bit of organisation to bring that to the market,” said Rui Bras Fernandes, CEO at u-find.me.

At play is also the so-called ‘return effect’, as IT experts who went to work for large tech companies abroad are now coming back to be close to their families, bringing their expertise to Portuguese startups.

“Portugal is a fantastic market for startups because we can quickly implement our pilot projects in a small but differentiated scale,” noted Tomas Costa, CEO at dioscope.

Costa explained that startups can have almost direct contacts with partners who could provide funding. However, the downside of a small market comes when companies try to scale up.

“The most difficult step is to prove that what you are doing here in Portugal can be escalated to other countries and replicate your business model in another location,” Costa said.

For others, given the common language and geographical vicinity Portugal might be an interesting location for companies interested in expanding in Brazil or Africa, as is the case for Paolucci’s 01talent.

However, such an international reach is not without complexities, as some startups might prefer to first establish themselves in the European market.

“We tried to open the company in Brazil and the regulation process was way more difficult than going, for example, into the Italian market. Of course, we can do better here in Europe, but it’s way easier to scale up in Europe than to try to escalate our solutions to non-European countries,” Costa added.

While the ecosystem for startups in Portugal has improved, it is not without flaws. For Fernandes of u-find.me, “it’s very difficult to own a company in Portugal, taxes are very high. There needs to be a better tax environment for startups to really flourish”.

Hugo Castro, CEO at ushowme.tv, stressed that the Portuguese government has still a long way to go to make its functioning less bureaucratic and more agile. Furthermore, he pointed to the conservative attitude of investors and consumers that could make Portugal less keen on innovation.

“There is this small-minded vision that what is Portuguese is not good unless it goes outside and is recognised abroad. This mentality needs to change,” Castro said.