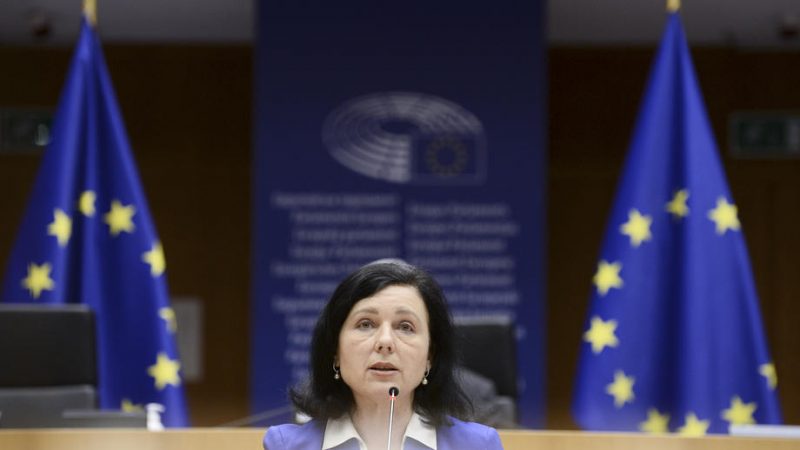 EU negotiators want an ‘absolute guarantee’ that personal data transferred to the US will not be subject to ‘mass surveillance,’ as part of ongoing talks on a new EU-US data transfer mechanism, according to the European Commission’s vice-president for values and transparency, Věra Jourová.

Speaking as part of a EURACTIV event on Wednesday (10 March), Jourová set out her stall for what she would like to see as part of a revision of the EU-US Privacy Shield agreement, which was struck down by the European Court of Justice last year.

The courts had ruled that the scope and pervasiveness of the US surveillance framework does not allow for a sufficient degree of protection for European data, putting it at a risk that would violate rights afforded to citizens under the EU’s general data protection regulation (GDPR).

There should be no “mass collection of data without probable cause,” Jourová noted, adding that this was a principle present in the European Union, and it should be applied to EU data when transferred abroad.

The Commission vice-president also noted that negotiations on a new Privacy Shield agreement should move closer towards a situation where there is the “absolute guarantee that mass surveillance will not happen, [and] that the private data of European people will not be abused.”

More specifically, Jourová also highlighted that EU negotiators will also be attempting to achieve several guarantees as part of a new transatlantic data transfer accord.

“As like-minded partners, we should be able to find appropriate solutions as we have to address principles that are cherished on both sides of the Atlantic: access to court, enforceable individual rights and limitations against disproportionate interferences with privacy,” she said, highlighting that these three objectives would form the backbone of the EU’s negotiating stance in the talks.

More broadly, Jourová welcomed Joe Biden’s appointment as the new US president and noted that this spells a positive move in terms of the ongoing negotiations.

“Now, with the Biden administration, we feel in Europe that the United States as we know it is back,” she said. “I actually believe that this provides an opportunity for the EU and the US to develop a framework that builds on shared values of human dignity, democratic principles and the rule of law.”

For his part, Christopher Hoff, who is leading discussions on behalf of the US Department of Commerce, on a new Privacy Shield agreement, noted that finding common ground in the talks is at top of the list for the Biden administration.

“Commerce Secretary Raimondo said in her Senate hearing that finalising the Privacy Shield renegotiations is a top priority,” Hoff said.

Commenting on last year’s decision by the top EU court, he noted that the ruling focused on a “limited set of issues” related to national security issues, as well as on the appointment of an ombudsman to oversee data protection complaints issued by EU citizens to US authorities, and not necessarily on federal privacy law in the US.