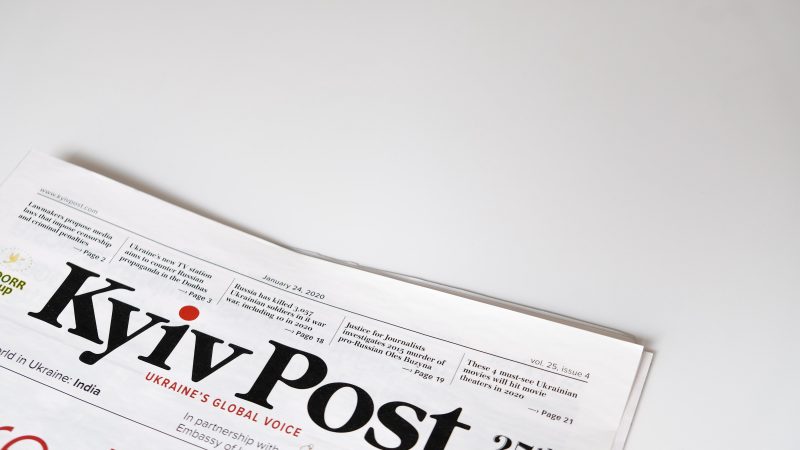 The Kyiv Post was launched in 1995 and has since become known as a prominent English-language source for critical reporting.[Shutterstock / juliet_dreamhunter]

The Kyiv Post, Ukraine’s oldest English-language newspaper, has been abruptly shut down in a move that staff describe as an “act of vengeance” by the publication’s owner.

Staff at the offices of the Kyiv Post on Monday (8 November) were informed without warning that they were no longer employed by the paper, which was launched in 1995 and has since become known as a prominent English-language source for critical reporting.

Adnan Kivan, the paper’s owner since 2018, said that the publication would close immediately “for a short time”, adding that “one day, we hope to reopen the newspaper bigger and better.”

Three weeks ago, staff were made aware of Kivan’s intention to expand the Post and launch a new Ukrainian-language outlet, details of which led to opposition from the paper’s existing team.

“We consider the cessation of publication and the dismissal of the paper’s staff to be an act of vengeance by Adnan Kivan”, staff said in a statement released following their dismissal on Monday.

“He has officially announced plans to “reorganise” the Kyiv Post and restart operations in a month with a new team. We see this as the owner getting rid of inconvenient, fair and honest journalists.”

The notice came amid the ongoing attacks on the paper’s independence. @KyivPost has been Ukraine’s Global Voice for 26 years.

A request by the fired staff to instead sell the paper or transfer the Kyiv Post trademark to the newsroom was also denied.

Lina Kushch, first secretary of the National Union of Journalists of Ukraine (NSJU), told EURACTIV that the closure was an “extraordinary event”, particularly given that it was the result of the owner’s decision rather than economic reasons.

“Kyiv Post is a brand that has developed and monetised largely thanks to the independent editorial policy and the team of professional journalists. This position of the newspaper formed the confidence of the audience. Now, this trust has been destroyed.”

The Kyiv Post’s staff arrived at work and were called into a meeting on Monday with no indication anything was amiss. Once gathered, Brian Bonner, executive director and longstanding chief editor of the paper, announced his departure, after which the entire staff were dismissed with immediate effect.

“I was routinely doing my job before the meeting, and then I was notified that I just don’t have a job anymore. That’s it.”, Anna Myroniuk, staff writer at the Kyiv Post told EURACTIV.

The news was particularly shocking, she said, given that just a few weeks prior, employees had learned of Kivan’s intention to expand the Post, developing it digitally and launching a Ukrainian-language counterpart to its work in English.

The team supported the expansion in principle, said Myroniuk, but opposed how changes were being made in terms of both transparency and editorial independence.

The Post’s staff found out about the plan in mid-October through the Facebook post of a media manager working for Kivan who was appointed as deputy chief editor of the new Ukrainian site, without Bonner’s knowledge.

At the time, the Post team were unaware of the plans for expansion or her appointment. They were subsequently assured that there would be an open and transparent competition and interview process for the role, a pledge which Myroniuk says was “overturned in one day yesterday.”

The expansion came to be seen by the staff instead as “a threat to editorial independence because of the lack of transparency and the desire of the owner to impose people from his circle on us to lead the new team of the Kyiv Post”, Myroniuk added.

This wasn’t the first time there had been tensions between the editorial team and Kivan, either. “He told us a few times that he feels that our stories, our criticism of the political establishment across all levels, our articles evoke some problems for him as a businessman”, said Myroniuk.

“We were fired because we are inconvenient for the owner, and he wants something else for the paper…We see that as the owner’s move to get rid of nonconformists, journalists who stand for their principles, professionalism, ethics and the highest standards of journalism.”

Kivan, a property tycoon who made millions investing in construction in Odesa, bought the Kyiv Post in 2018 with the promise of ensuring the publication’s independence.

“I highly value the work of Kyiv Post journalists and intend to preserve editorial independence, not only in Ukraine but for its international distribution”, he said in a statement published at the time.

Oligarchic and concentrated control of the media is a particular concern in Ukraine, which was ranked 97th in Reporters’ Without Borders’ (RSF) 2021 World Press Freedom Index. While concentration is less in the country’s print and online media sectors, RSF’s Media Ownership Monitor notes, political influence in media remains high, and the financial structures of outlets are often opaque.

“This case”, said Kushch of the NSJU, “showed that it is extremely important for Ukraine to create guarantees of economic independence of the media and non-interference of owners in editorial policy.”