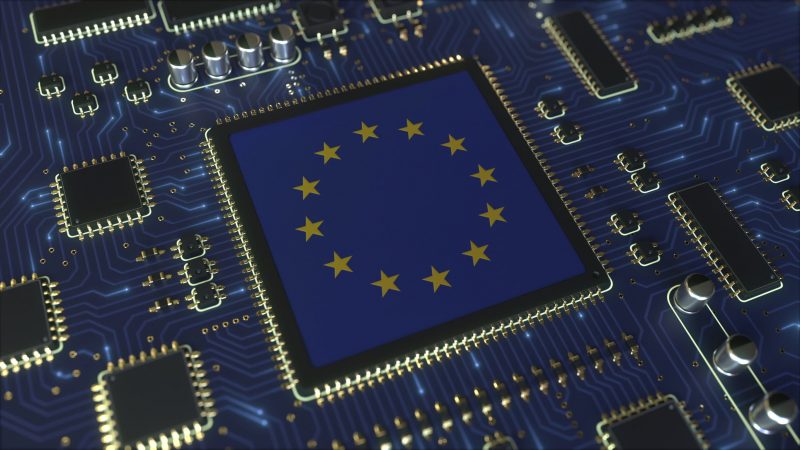 The European Commission is due to present the proposal for a European Chips Act on Tuesday (8 February). [Novikov Aleksey/Shutterstock]

The package proposal is dated Wednesday (2 February) and includes a draft regulation, a strategy document and a toolbox in the form of a recommendation. The leaked documents anticipate what the EU executive will propose on 8 February.

“The semiconductor sector is both capital and knowledge-intensive and subject to rapid technological evolution. Production of chips takes place in a supply chain that is global, complex and, in some important segments, overly concentrated,” the strategy reads.

According to a source informed on the matter, the drafts might still see some significant changes before publication as discussions on state aid and supply chain control measures are still ongoing in the Commission.

The proposals set up Chips for Europe, a new EU programme dedicated to semiconductors, until 2027. The draft mentions no budget, except for €10 billion “to finance technology leadership in design and manufacturing capacities.”

The Commission will propose to revise its Joint Undertaking funding scheme to set up a public-private partnership targeted at research and innovation in semiconductors.

The declared objective is to build up Europe’s expertise in advanced chips below 2 nm, disruptive technologies for AI, energy-efficient processors, as well as emerging solutions such as 3D integration and supercomputers.

The Commission also seeks to “bridge from demonstration in a lab to production in a manufacturing facility.”

As the development of production lines for semiconductors can be a costly endeavour, the proposal includes creating pilot lines for testing prototypes and scaling up innovation.

The Chips Joint Undertaking will finance Chips for Europe, a pan-European initiative intended to build capacities across Europe in the medium to long term via the deployment of advanced design tools, pilot lines and testing facilities.

The Chips Act introduces the concept of ‘first-of-a-kind’ facilities, state-of-the-art factories to advance Europe’s technological status. These can take the form of Integrated Production Facilities for chip manufacturing, and Open EU Foundries for chip design.

Both types of facilities would need to positively impact the EU value chain, not be subject to obligations from third countries, and have a clear commitment to invest in the next generation of chips.

Moreover, the Commission plans to build a large-scale design infrastructure for integrated semiconductor technologies in the form of a virtual platform for businesses and research organisations.

The EU also wants to establish a certification scheme for green, safe and trusted chips. The intention is to make such certification a requirement in public procurement procedures and push it to become an international standard.

Decisive factors for flexing state aid rules include if the facility would otherwise not exist in Europe, if it is a first-of-a-kind and the investment’s sustainability in the long run.

A specific Chips Fund would be set up via the European Innovation Council and in the context of the InvestEU Programme.

The draft Chips Act establishes the European Semiconductors Board, an advisory body chaired by the European Commission with representatives of EU governments. Industry stakeholders might be invited to join the subgroups, but only with observer status.

The Commission and EU countries will conduct a risk assessment to identify the relevant indicators for an early warning mechanism and critical weak points in the supply chain. The EU executive can activate a crisis stage via delegated acts in case of early warning.

During a crisis, the Commission can request relevant information from industry stakeholders and issue a priority rated order for crisis-relevant products, mandating Integrated Production Facilities, Open EU Foundries, or other chipmakers.

The facility concerned is obliged to accept and prioritise a priority rated order. Failing to provide the requested products might lead to fines of up to 1.5% average daily turnover.

Another power the EU executive might use in times of crisis is to act as a central purchasing body, as it did in the case of vaccines during the COVID crisis.

While the Chips Act goes through the legislative process, the Commission will propose an EU toolbox to address the current global shortage.

For the Commission, “the EU will need to proactively manage its interdependencies with the rest of the world,” notably to make European products available on international markets and ensure supply security.