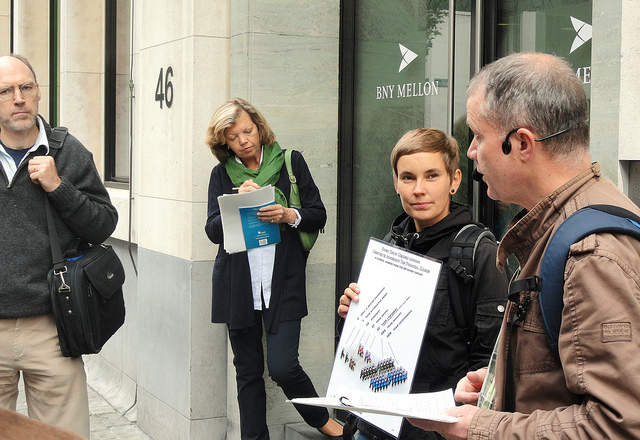 Public affairs in Europe is increasingly moving online to reach EU policy makers, linking their campaigns to what high-level official of the EU Commission, Robert Madelin, called the ‘creation of a digital public service’ on Thursday (19 June).

In three years, the number of MEPs on Twitter has soared. In 2011, only 34% of them were on the ‘micro-blogging’ platform. By March 2014, the number rose to 68%, possibly thanks to the campaigns for the 2014 EU elections. The Parliament itself is working on social media strategies since 2008. The Commission, too, has also expanded its online activities in the past years.

“It is the creation of a digital public service,” the EU Commission’s Director General for communications networks and technology, Robert Madelin said on Thursday (19 June).

Madelin was speaking at a conference on digital advocacy, organised by the Public Affairs Council in Brussels. “Commissioners are increasingly mobile,” he argued, “and there is a social media reflex gaining ground.”

Right now, Madelin explained, EU pundits are looking into the question of whether to structure digital agenda initiatives in one Directorate General or rather across the Commission DGs. The latter could boost the Commission’s move towards a more digital focus in all relevant policy fields.

And as EU policy makers have moved online, so does the interaction they have with interest representatives like business lobbyists or NGO advocacy officers. The practice is what András Baneth of the Public Affairs Council, and others, call ‘digital advocacy’: “Advocacy is the right term to use here and it is not a substitute for lobbying.”

“Lobbying would be understood as a private interest towards the government,” Baneth said. “Advocacy is something that everyone does: EU institutions are advocating their policies and try to get support for it as much as external stakeholders, private companies, media.”

In recent years, this has manifested itself in increasing presence on Facebook and Twitter of stakeholders, or in online petition campaigns. Websites such as change.org, for instance, help civil society organizations organise themselves online and European Citizens’ Initiatives (ECIs) – while confronted with numerous technical glitches – used online support to be successful.

But catching the interest of followers online remains tricky for some organisations. “You have to be clear: mention who you work for, who you are,” argued Anne Bundgaard Christensen, who until recently worked on social media engagement for the EU Ombudsman. “It is necessary to create trust, and it shouldn’t really be hidden.”

“[Brussels’ stakeholders] whisper that ‘secret is worth five or ten times as much’ [compared to a public debate],’” Madelin commented on the business lobbyists’ hesitance.

Bringing certain issues in the public spotlight can backfire, experience has shown. Just days ago, the US embassy in Berlin caused an online row by sending a tweet which promoted a $20,000 grant for pro-TTIP campaigns.

“The first question that public relations has to ask before starting a campaign is: ‘should you engage publicly on this issue’,” said Jon Worth, an online campaigning consultant. Top-level decision making is still being done behind closed doors. And for some, this is in their clear interest, Worth stressed.

One lobbyist confirmed the sensitivity to EURACTIV. “It’s true, some issues are better kept out of the public eye,” the lobbyist said.

“Before, I used to advise people to go on Twitter as soon as they could. Now, I say that people shouldn’t get into it,” said Gergely Polner, the former Head of Public Affairs for the European Parliament in the UK. “There is not one politician who won his or her seat because of Twitter; there are some who lost theirs. You can get in trouble using Twitter.”

Still, the increasing presence of policy influencers in the online sphere is boosting transparency, Baneth believes: “People most often talk about political engagement online. These are public and by definition open platforms. That makes it possible to see the different positions and it makes the whole conversation between governments and the citizens more visible.”

While traditional EU public affairs maintains an emphasis on face to face meetings in Brussels, successful online campaigning has certainly broadened the field. In the case of ECIs, a successful petition requires signatures from at least seven member states. NGOs, too, aim to mobilise citizens across EU countries when launching large-scale campaigns.

The national level is gaining importance, online, experts argued. “People tend to focus on Brussels, while a conversation could spark elsewhere,” said Chandler Wilson, head of analytics at Intrasoft International. Certainly on the ongoing transatlantic negotiations concerning the free trade deal, TTIP, observers and stakeholders alike should keep their eyes open for topics raised outside of the EU capital, he explained.

In recent months, EU politicians aimed to boost their election campaigns by using social media extensively. The EU institutions, too, had their hopes up that this would draw in the EU citizens that generally do not pay too much attention to EU politics.

Only, the percentage of Europeans voting in the EU elections on 22-25 May did not go up, showing the challenges of reaching EU citizens through these new ways of communication.

For many EU stakeholders, that conversation often is at the national level just as much as at the European level. “I think a lot of EU communications is having trouble breaking through to the national conversations,” Bundgaard Christensen said. “You need people on this level who understand it.”

The European Digital Advocacy Summit 2014 was organised in Brussels on 19 June by the Public Affairs Council, with EURACTIV as media partner.

The EU launched the European Transparency Initiative (ETI) in 2007, in an attempt to shed new light on all public affairs activities in Brussels and the EU capitals. Recent tools for transparency include the Transparency Register that came into effect in 2011 and offers information on lobbyists involved in EU policy influencing, and the Register of Commission Expert Groups.

Recent years have brought a surge in social media use by EU policy makers and organisations trying to influence them. 'Digital advocacy' concerns online campaigning as well as the analysis of networks and content involved in EU policy making, is a growing field of public affairs activities in Europe.