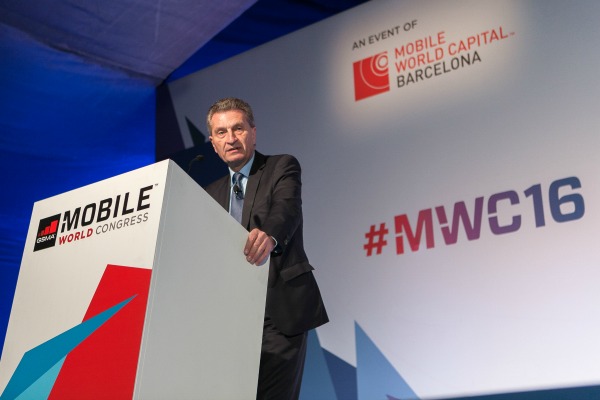 The Bundesnetzagentur, Germany’s telecoms authority, notified the European Commission yesterday (7 April) about its decision to allow the so-called vectoring technology exclusively on copper wires to speed up broadband internet connections. But competitors have panned the decision, which they argue will give giant Deutsche Telekom an unfair advantage and keep smaller companies from accessing networks.

The European Commission has one month to form its own opinion of the German regulator’s decision. If the executive expresses “serious doubts” about the decision, another two-month inquiry would follow.

In a letter sent to Oettinger earlier today (8 April), the MEPs argued that allowing vectoring would lead to “remonopolisation of fixed-line access networks”.

The MEPs criticised the decision as a limitation on free competition that would give Deutsche Telekom to update their copper networks.

Vectoring would, especially in “poorly serviced areas”, meaning rural parts of Germany, have “huge disadvantages” where distances between broadband cabinets and the premises they connect to are especially long.

The MEPs cited an opinion from Germany’s competition authority and warned against “forgoing competition to the benefit of the company with the largest market power”.

“That’s why we’re asking you to consider vectoring appropriately in the notification process, which will barely bring technical progress and is more than questionable from a competition perspective,” the letter reads.

A committee of the Bundesnetzagentur’s advisory board is meeting on Monday (11 April).

In a letter sent to the agency’s president yesterday, the vice president, Wilhelm Eschweiler, summed up the initial decision, stating that Deutsche Telekom can in the future “deny competitors access” to its copper networks.

The paper called for less regulation of the telecoms industry and less EU involvement in national regulation. Critics said the draft document would benefit Deutsche Telekom. The position paper is still pending approval from the federal government.

EURACTIV reported yesterday that the Juncker Plan for investment will soon set up a dedicated funding track to channel loan money into building more broadband networks in rural areas.

The European Investment Bank (EIB) will set aside a dedicated part of the Juncker Plan to target broadband funding in rural areas, according to sources.