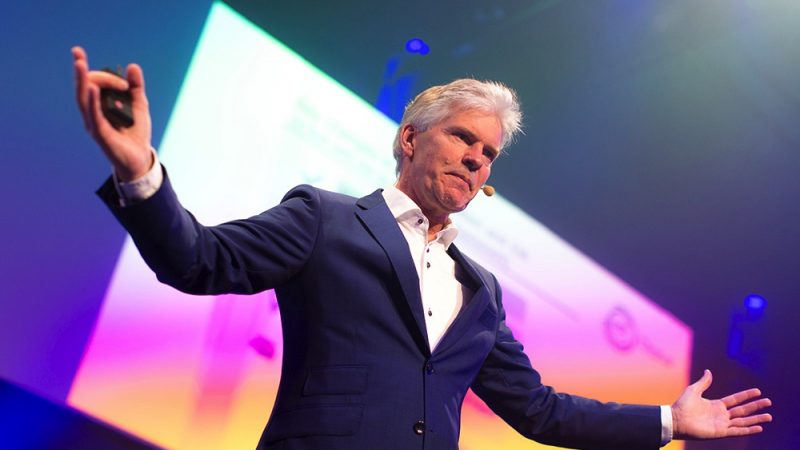 This article is part of our special report Mapping Europe’s tech landscape.

The next global trend in the technology industry will involve digital miniaturisation and nanotechnologies, the head of EIT Digital, Willem Jonker, has said.

Speaking at the opening of the 2019 EIT Digital conference in Brussels last week, Jonker highlighted the recent trends in the technology sector and made some bold predictions for the future.

“The first decade of this century was all about the deployment of fixed and mobile infrastructure,” he said. “The second decade was all about platforms and data – Facebook got to one billion users in Q4 of 2012, it was a big thing, it was the decade of the platforms.”

“The third decade will be about digital miniaturisation,” he said, adding that several key developments are taking place – such as the use of photonics in networks or quantum technologies in computing.

“Now you see the next wave of infrastructure paving the way for technologies and the applications of the next decade,” he said.

In broad terms, nanotechnology and digital miniaturisation refers to the manipulation of elements on the atomic and molecular scale – measured at approximately 100 nanometres across.

This form of technology involves the production of miniature electronic devices which can be employed for a range of uses including in the environmental and health sectors.

The European Commission has been conducting research into the future of nanotechnologies on the continent for several years, and as part of the Horizon 2020 funding mechanism, the EU has been attempting to bridge the gap between nanotechnology research and markets, in addition to realising the benefits that nanotechnologies can bring to “sustainable growth, competitiveness, environment, highly skilled jobs and the increased quality of life”.

Elsewhere at this year’s EIT Digital conference, appearances from key political players in the digital arena spoke out about the state of tech in the EU. S&D MEP Eva Kaili struck a particularly sombre tone about the challenges of balancing regulation with innovation, describing her own stance as advocating for a “principle-based approach that doesn’t stop innovation”.

She added that a ‘strong digital Europe’ should ‘give back trust to citizens’ following a series of mass data breaches on the bloc that has harmed confidence in the ability of lawmakers to efficiently regulate against such risks despite the GDPR.

Kaili also noted the forthcoming priority of the Commission to device an Artificial Intelligence strategy in the field of ethics, and spoke about how ethical considerations should always be taken into account in the tech realm.

“One example could be the use of data in the health sector to monitor diseases. Imagine if this would create barriers for access to social welfare insurance,” she said. “For example, you are Google searching a chronic disease…and you find that others could have access to your research data. Can they be trusted not to share this data?”

“Suddenly firms may have access to this information. This is something we don’t want to happen.”

Elsewhere, Yves Lostanlen -Managing Director & Head of Europe, Middle East and Africa at Element Ai took to the stage to talk about the importance of Europe’s startup culture and why the bloc should do all it can to “help companies transform their business in a responsible way”.

That is a point also highlighted by Chahab Nastar, Chief Research and Innovation Officer of EIT Digital, who noted the work done by the EIT Digital in supporting “the incubation of innovative businesses from the startup level to completion in 12 months”.

While Jonker’s opinion on the future technological trends of Europe was not explicitly highlighted by other participants at this year’s conference, his reading seems to follow past funding patterns.

For the EIT Digital chief, this future trend of deep miniaturisation is likely to be branched across a number of different fields, including network infrastructures, computational systems, and sensor equipment.

Since 2007, the EU has invested €450 million in more than 110 projects related in nanoelectronics in particular, a field of nanotechnology, that includes smart embedded components and systems.

A particular sector where nanoelectronics have made sound progress is in health. The EU funded ‘Nanoma’ research project is a case in point. The initiative sought to experiment with the deployment of nanorobotic delivery systems designed to improve the administration of drugs in the treatment and diagnosis of breast cancer.

Nonetheless, despite a series of ambitious research project being backed by EU funds, it remains unclear whether any financial support will be put aside for nanotechnologies in the EU’s forthcoming funding mechanism, the Horizon Europe fund – a €100 billion research and innovation programme to succeed Horizon 2020.

The Commission has outlined areas such as supercomputing, artificial intelligence, cybersecurity and digital skills as particular priorities for the allocation of funds. Nonetheless, an EU source has recently informed EURACTIV however that it would be “surprising” if digital miniaturisation wasn’t an area of relative importance for the EU to pursue in the future.