EU Taxation Commisisoner Pierre Moscovici said that his proposal to tax digital companies 3% of their revenue is not 'anti-US', but approximately half of the companies it will affect are American firms. [European Commission]

After half a year of intense debate and bickering between member states, the European Commission proposed on Wednesday (21 March) a new system for taxing digital companies that will charge large firms 3% of their revenue.

The EU executive said it will affect between 120 and 150 companies—and half of those are American tech giants. The plan also sparked immediate backlash from American tech companies.

The EU proposal will bring in around €5 billion per year in revenue to member states, according to the Commission’s estimates.

“We must be conscious that citizens really expect and are waiting for us to tax properly the digital economy. It’s a question of fairness,” Pierre Moscovici, the EU Commissioner in charge of taxation policy, told reporters on Wednesday.

The Commission has argued the new tax rules are necessary because tech companies pay an average tax rate of 9% in the EU, while other firms with a “physical” presence in the EU pay an average rate of 23%.

And the EU executive argues that the gap is widening because digital firms’ revenue grows at a much faster rate of 14% annually.

The rules will set up a common EU system for taxing new services like online advertising that target internet users based on their data and internet search habits, Commission officials said.

Moscovici hit back against criticism that the proposal targets American technology companies unfairly.

“There is neither a GAFA tax nor an anti-US tax. Our proposal does not target any company or any country,” he said, using an acronym for Google, Apple, Facebook and Amazon.

Half of the companies that will face the new 3% revenue tax are US-based firms, while around one-third are European, Moscovici told reporters.

The proposal will tax companies’ revenue based on digital services like online advertising—which will hit Google and Facebook—or platforms that connect its users, like Airbnb or ride-hailing app Uber.

Moscovici described those as short-term measures that will affect large companies with annual revenue of €750 million or more, and will be phased out once the EU agrees to broader legal changes.

He argued that the Commission set the €750 million-threshold to shield smaller companies and startups from new tax burdens.

Also on Wednesday, the EU executive published a proposal for new, long-term tax rules that will affect companies with a “significant digital presence”.

Under that proposal, member states will be able to tax companies even if they have no physical office in their countries. Firms will need to fulfill one of three criteria to be taxed under the system: annual revenue of at least €7 million from digital services or more than 100,000 in a member state, or more than 3,000 contracts per year with business users.

The EU plan has amped up political tensions with the United States at a time when the Commission is trying to negotiate an exemption from the Trump administration’s newly announced tariffs on steel and aluminium.

Moscovici and US Treasury Secretary Steven Mnuchin have clashed over the EU proposal. On Friday, Mnuchin said he firmly opposed “proposals by any country to single out digital companies”.

The EU tax chief denied that his proposal was a “retaliation” against the US tariffs or the Trump administration’s recent move to lower the US corporate tax rate. Member states pushed for the new rules last autumn, and “at this time there was no tax reform abroad and no trade issues, which happened recently,” he said.

Christian Borggreen, vice president for European operations of CCIA, a lobby group that represents Google and Facebook, called the proposal “discriminatory” and said it “ignores the global consensus that the so-called ‘digital economy’ should not be singled out”.

The Commission’s proposals are likely to face a rocky path forward, and can only take effect after they are approved by the European Parliament and all EU member states. Changes to EU tax law require more solid support than legislation in many other policy areas because national governments must unanimously back any new rules.

France led a call for new rules to tax digital companies last September, and quickly secured backing from a group of countries including Germany, Italy and Spain.

But countries with lower corporate tax rates, including Ireland and Luxembourg, have criticised the Commission’s plan. They argue that the EU should wait to align its tax rules with a broader group of international partners.

The Commission is working with the OECD to reach an agreement on taxing digital companies, but the organisation expects to reach a deal between its 35 member countries by 2020.

The OECD published a report last Friday stating that there is still no consensus among its members about how to tax tech firms.

Moscovici said the EU cannot wait for an international agreement. He wants the new, short-term legislation approved by the end of this year.

One Commission official said that tech firms could choose to reduce the corporate tax that they pay in a particular EU country if they are charged the new levy on their revenue in other member states. That could potentially mean that companies will pay lower corporate taxes than they currently do in certain member states.

Several US-based tech giants, including Google and Facebook, have established their European headquarters in Ireland, which has a corporate tax rate of 12.5% and has been one of the most outspoken critics of the Commission’s digital tax plan.

The average corporate tax rate in the EU is 21.5%. 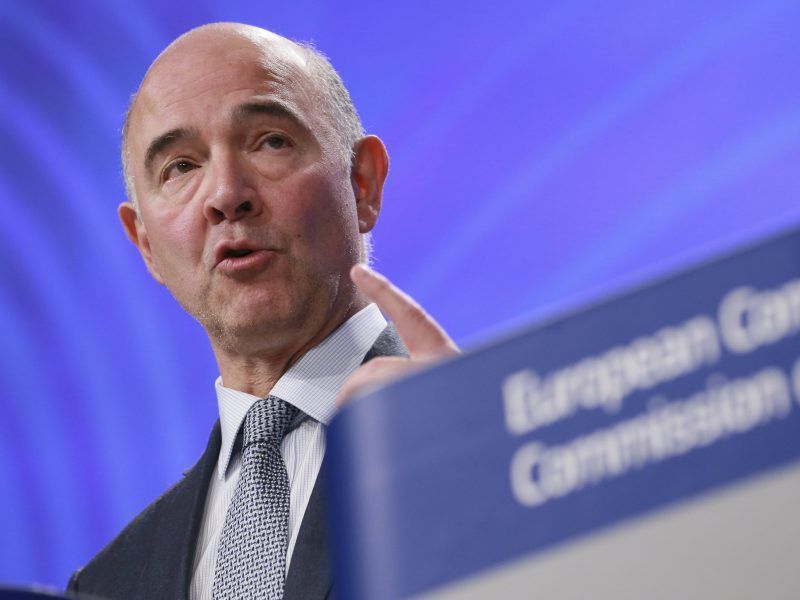