The new Parliament building (the former Communist headquarters) is the background of protests, asking for the resignation of PM Boyko Borissov. "Boyko, you will wreck the country", the banner reads. [Kalina Angelova, EURACTIV Bulgaria]

On 2 September the Bulgarian parliament moved into a bigger building: the former Central Committee of the Bulgarian Communist Party HQ was revamped to host the 240 MPs. On the same night the protests took a violent turn, which attracted international attention. 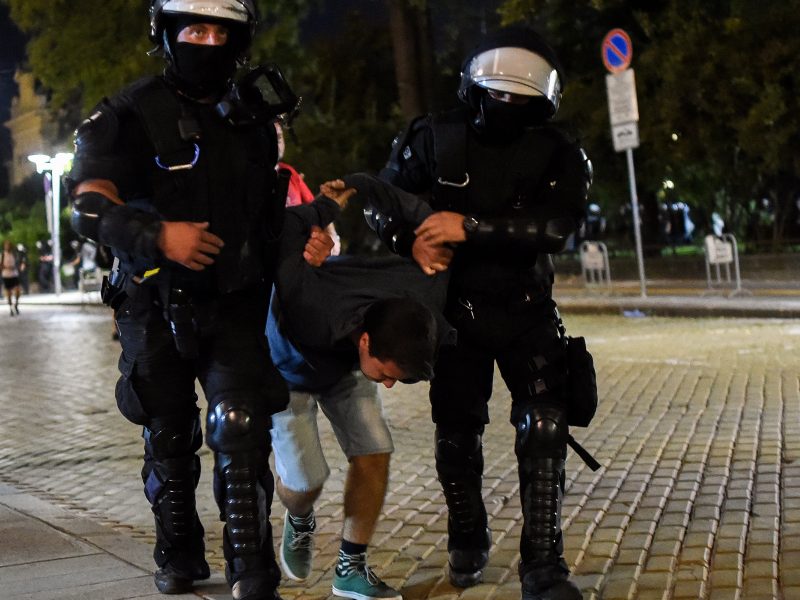 But what went unnoticed is that the “new” building was used as an alibi to introduce new restrictive rules of access for journalists, citizens, NGOs and small political forces that are not represented in the parliament.

In the old building, journalists could mingle with MPs in all the common spaces except the hemicycle. This tradition of 30 years was one of the tangible achievements for press freedom after the fall of communism.

But it seems that this advance is now becoming ancient history.

According to journalist Simona Kostadinova from the Mediapool website, the ruling coalition has imposed humiliating working conditions on journalists, which mean they cannot perform their duties in the public interest.

Reporters are crammed into a small corridor and can see MPs and ministers only at specially convened press conferences or on a television screen that is often interrupted.

The effort of the government to stay away from the media is evident in the fact that restrictive railings and turnstiles have been installed in the building, Kostadinova writes in an article she submitted exclusively to EURACTIV Bulgaria.

According to her, it is not by chance that Bulgaria ranks 111th in the Press Freedom Index of Reporters without Borders – the worst ranking not only in the EU, but also worse than the Western Balkan countries candidates that are seeking EU membership.

More than 60 journalists did not give up their right to ask questions and refuse to report using the controlled “leaked” information on offer. On Wednesday, they submitted a petition to parliament speaker Tsveta Karayancheva from the ruling GERB party (EPP-affiliated).

“The physical isolation of the media and the lack of opportunity to speak freely with MPs and guests in the National Assembly building – ministers and representatives of institutions subject to parliamentary scrutiny, severely limits access to information, which is a fundamental democratic right of citizens,” the journalists write.

There are also signatures from the two largest private televisions bTV and Nova TV, as well as from reporters, cameramen and photo reporters from Dnevnik, OFFNews, Mediapool, ClubZ, Sega, 24 Chasa, Capital, Focus, News .bg, Dir.bg, BGNES and other media.

“The message that the government is sending us is that they are comfortable at the bottom of the press freedom index. The ruling party, as well as DPS (the Movement of Rights and Freedoms, representing the ethnic Turks, ALDE-affiliated), have always belittled the ranking of “Reporters Without Borders” and the shameful place of Bulgaria in it, moreover – they ironize it hinting that this is an attack by Soros. This is another attempt to say – everything is fine and some bad people are speculating, “said journalist Plamena Ignatova, one of the organisers of the petition.

What the authorities say

According to the authorities, the reason for the isolation of the reporters in the National Assembly was that “this is how it is done in the European parliaments”.

This, however, is not true – in the European Parliament, journalists and the press can mingle in all public spaces. Also, the authorities say that media representatives would be able to contact MPs through the PR services of the individual parties.

In Bulgaria over the last 20 years a practice has been established whereby ministers, political parties and institutions use private PR firms as an intermediary for their contacts with the media. This means that PR firms act as filters and give access only to “friendly” media and journalists.

This is where the big problem lies. “Many years of experience with these same PR people lead to a reasonable assumption that they will not” provide “deputies to journalists,” said Ignatova. The other journalists who signed the letter to Karayancheva are of the same opinion.

Meanwhile, NGOs, parties and citizens are finding it increasingly difficult to be admitted to the relevant parliamentary committees, which review the country’s legislative changes before they are finally adopted.

Over the years, it has been established that they can attend and express their opinion upon prior request.

Now, however, the situation has changed – only representatives of state institutions are allowed in parliament, and rare exceptions are made for NGOs, but with many reservations. Karayancheva’s explanation is that these are measures against the spread of the coronavirus.

On Tuesday, the former ombudsman of the country and current leader of the civil platform “Stand Up.BG” Maya Manolova and representatives of the extra-parliamentary association “Democratic Bulgaria” were not allowed to attend a meeting of the legal commission, which reviewed the hasty changes in the country’s election law.

Outside the institutions, there was only a representative of Transparency International in the meeting room.

On this occasion only the MP from the opposition Bulgarian Socialist Party (BSP) Krum Zarkov raised the issue and asked what the reason was.

Meanwhile, protesting mothers of children with disabilities barricaded themselves for the second time in the parliament building, this time in the reception room because they were not allowed into the building itself. They said they would not leave until Borissov and Geshev resign. However, they were ousted by force, sparking outrage.

EURACTIV Bulgaria is organising an online conference on media freedom in Bulgaria, with the participation of European Commission Vice President Věra Jourová, on 12 October at 14:00 CET. Registration will be open soon and advertised on the website.