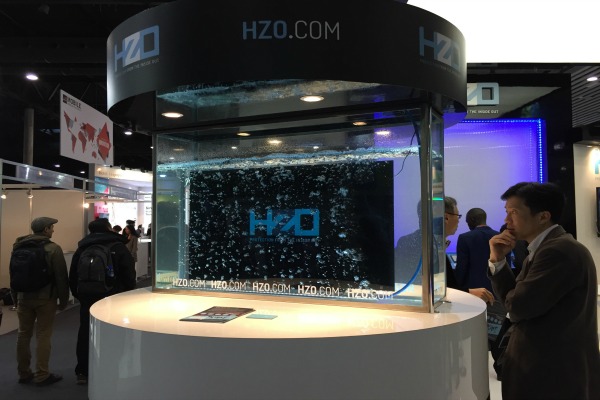 SPECIAL REPORT / Disruptive innovations were thin on the ground at the Barcelona Mobile World Congress. But an air of expectation is gathering around 5G technology, which promises to deliver the kind of pervasive connectivity required for the ‘Internet of Things’.

Korean giant Samsung launched its Galaxy S6 Edge phone at the start of the week, emphasising innovation as its dominant theme.

The phone incorporates ultra-smart camera technology and is rounded at the edges. That lets users identify – through a colour bar – who might be calling during a meeting, even when the phone is face down on a table.

It is a slick feature but more of an addition than a disruption.

Watches and phones, the next big thing?

The next day saw the launch of Chinese-headquartered Huawei’s Android smartwatch, a growing market. Such watches perform varying functions connected to the phone, with additional health analytics.

Interest around watches prefigures the launch by Apple of its own watch scheduled for the beginning of next month.

Apple products often garner wider market interest and its watch is expected to create a greater buzz around smartwatches. Analysts predict that 350 million will be worn worldwide by 2018.

It is hard to imagine the smartwatch displacing the smartphone as the key mobile technology however, and by 2018 another landmark will be reached when – if statements laid down in Barcelona prove correct – standards for 5G technology should be near completion.

The launch of the Commission’s 5G vision document could come to be seen as more significant for innovation in the longer run.

The result of 18 months of discussion within the European Commission’s 5G Public-Private Partnership (see background), the chief aim is to trigger a global debate to define the scope of 5G, its main technological constituents, and lay down a firm timetable for putting it in place. The process is expected to conclude by the end of 2015.

All eyes will now be on the consortium 3GPP, the body which will develop those standards. Its members and those appointed to its various sub-committees will play a significant role in formulating the standards.

Standards and spectrum will determine 5G

Exploiting 5G to the full will only be possible with sufficient bandwidth, allowing phones and objects to be connected at all times.

5G access networks will require hundreds of megahertz up to several gigahertz of radio frequency to be provided at very high system capacity. Carrier frequencies above 6 GHz will need to be used.

“Maintaining a stable and predictable regulatory and spectrum management environment is critical for long term investments,” according to the Commission’s vision. This is one area of concern, since attempts to reach consensus between EU member states on spectrum is proving complicated.

Achieving tangible results on spectrum coordination will be critical. Massive amounts of additional frequency will be required as a vehicle not only for connecting people through their phones, but things to people and things to things.

The Internet of Things is truly around the corner, and 5G has the capacity to deliver it, the Commission believes. But in innovation terms, it still remains opaque as new services will follow the standard and network roll out.

The hyper-connected world is around the corner

Innovation is likely to take on an exponential dimension in the 5G environment as the connectivity of objects will open up hitherto unimagined possibilities.

As with all disruptive technological changes, there will be winners and losers.

Europe is betting big on 5G and experimenting with new industry partners from home and abroad.

“5G will represent a new wave of innovation. We need to ensure that technological revolution and business model evolution go hand-in-hand,” President of 2012 Laboratories (R&D) with Huawei, Li Yingtao, said at the launch. “We are joining forces with our European partners to help the EU take the lead on the road towards 5G.”

HZO is a Utah-based company that offers a waterproofing service for electronics and chips. A 40-inch television set sat submerged in a bubbling aquarium on its stand in Barcelona. A mesmerising spectacle and useful service, it was emblematic of innovative design encasing existing technology, as was much else on display in Barcelona.

Television underwater is one thing, but the next big leap will be internet everywhere.

A set of EU projects on 5G is already reaching completion.

Günther Oettinger, the Commissioner for digital economy and society, launching the EU’s ‘5G vision’ in Barcelona on Tuesday (3 March) said that research grants for €125 million will soon be granted to 20 projects to deliver key building blocks for 5G including network architecture, new radio technologies, new service platforms, and innovative utilisation of spectrum.

One response to “Next wave of innovation waits on 5G connectivity”