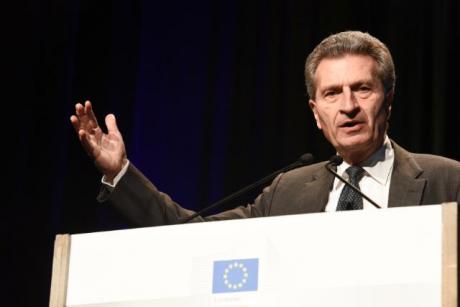 The European Union is the largest single market in the world, but it still consists of 28 fragmented digital markets, a structure Digital Commissioner Günther Oettinger hopes to transform into a “Digital Union of Europe.” EURACTIV Germany reports.

“One response to the digital revolution must be the Europeanisation of digital policy,” Günther Oettinger said on Monday (16 March) at CeBIT, a major IT business fair in Hanover.

The creation of a digital single market can be a decisive advantage for all those involved, Oettinger indicated. “We are still working in 28 fragmented silos, with many disadvantages for all participants,” he said.

Added to this, Oettinger stated, there is the fact that national rules are respected less and less at a global level. “A national data protection law is no longer respected by Google, Facebook or Apple,” he pointed out. Companies sit in Dublin, for example, and “soak up Europe’s data”, Oettinger said. “German data protection is not heeded, but data from Germany is valuable and it is used.”

According to Oettinger, the goal is a European digital union which can become a capable partner for the United States, China and India. “We are creating rules for roaming and a uniform definition of net neutrality,” the Digital Commissioner stated. The Commission also hopes to present a proposal for a uniform copyright law within this year, he indicated.

Oettinger pointed out that it is also important to advertise for IT-related jobs and fields of study. “There is currently a demand for 150,000 additional IT specialists in our European labour market. And the mechanical engineer, the electrician, the chemist, the bank clerk, the bookseller: they all need digital continuing education to maintain the prospects of their own job,” the EU Commissioner pointed out.

There are many issues that can only work in a European way, Oettinger explained, “but not everything must be centralised at a European level.” These days, the European Commission is seeking to discuss with the German government and German business what should be solved at a European level. “For which areas should Brussels be the main authority? And where do you – the economy and German politicians – expect that Europe should not be involved?”

Chairmen of the newly assembled national IT summit also met at the CeBIT event on Monday, under the direction of German Economic Affairs Minister Sigmar Gabriel. Oettinger also took part in the meeting.

Summit members discussed how Germany and Europe could secure their digital sovereignty and what a modern regulatory framework for the digital single market should look like. The meeting also initiated work in eight platforms, and in two fora designated to implement the central aspects of the Digital Agenda.

“We are pursuing a digital vision for Europe,” Gabriel explained, “It is my goal that Germany and Europe lead innovations in all important areas of the digital economy – such as in Industry 4.0, intelligent services and Big Data. Only in this way will we able to set standards in a globalised world, achieve market dominance and at the same time secure our digital sovereignty.”

On Monday Oettinger also discussed current issues in cyber security and the status of implementing national and international regulatory initiatives in this area with German Interior Minister Thomas de Maizière.

“With the draft for an IT security law, the German federal government has presented a bundle of concrete measures for increasing IT security in Germany,” de Maizière explained.

The German government has made such proposals in ongoing talks over an EU directive to provide higher common network and information security in the EU, the Interior Minister commented.

De Maizière indicated that in his view the German position has “also been understood at the European level. In this way Germany is taking on a leading role in a field that is becoming increasingly important at a time of growing digital vulnerability.”

On 17 December, the German government tabled a bill to introduce higher IT security standards. The first reading of the draft legislation in the Bundestag will take place this week. For operators in critical infrastructure – from energy supply to transportation, from healthcare to banking and insurance – the measure plans industry-wide IT security standards to be implemented in Germany. In addition, severe IT attacks are to be reported to the Federal Office for Information Security (BSI) to promote early recognition of threats in cyberspace and provide others affected with the ability to implement countermeasures in a timely manner.

To bolster IT security on the Internet, the measure plans parallel increases in requirements for telecommunications and telemedia services.

Meanwhile a draft for an EU directive on providing higher common network and information security is currently under negotiation in Brussels. Like the draft IT security law, the measure aims at protecting IT critical infrastructure as well as the administrative structure and cooperation among member states in the realm of cyber security.