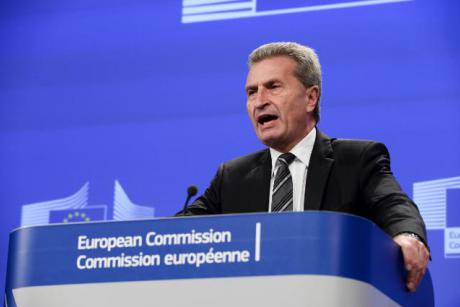 Günther Oettinger, the EU’s incoming Digital Commissioner, has announced plans to reform existing copyright laws within one year, indicating the likely addition of an EU “Google-tax”, similar to that applicable in Germany. euractiv.de reports.

An EU-wide “Google-tax” would require internet search engine providers to pay a fee for displaying copyrighted materials on their sites.

“If Google takes intellectual property from the EU and makes use of it, the EU can protect this property and demand that Google pay for it,” Oettinger told the Handelsblatt newspaper.

The next step, Oettinger pointed out, is to determine what intellectual property actually is and what rights can be established for artists, scholars and authors.

“Then, finally, there is the matter of compensation.” Copyright usage fees should not only be paid by European users, but also US companies like Google, he argued.

At the same time, Oettinger said that differing interests among stakeholders is likely to draw out the process of completing a digital EU internal market.

“For the time being, I must find a balance between user interests, intellectual property and artistic works on the internet”, Oettinger explained. “This is a difficult task, for which I’m going to need at least all of next year.”

In Germany, so-called ancillary copyright has existed since August 2013. The measure requires search engine providers like Google to pay a fee to publishers when they use or link to published content, with application of the rule applying to as little as “individual words or small excerpts of text”. Google has objected to the rule.

In a recent debate with Google chief Eric Schmidt in Berlin, German Economic Minister Sigmar Gabriel criticised the fact that Google uses information published by the press and does not pay for it.

“Somehow I see that as a strange business model,” Gabriel said.

In practice, German ancillary law has required all news aggregators and search engines from the media collecting society, except Google, to pay usage fees, according to Julia Reda, an MEP from the Pirate Party in Germany.

It remains unclear whether or not Oettinger was referring to German ancillary copyright law in his statement, Reda wrote on her blog. But, she added, it is safe to say that his proposal should be considered a failure.

“Exporting ancillary copyright law to the European level would be an inglorious start for much-anticipated European copyright reform,” Reda commented.

Nevertheless, Oettinger received a bit of praise from the Green Party. In contrast to the grand coalition, the new EU Commissioner is not shying away from the issue of copyright law, said Bundestag MP Konstantin von Notz.

“On the other hand, the German government has completely left the conversation and, itself, refuses legislative adaptations at the national level.”

Copyright reform that meets consumer and creative needs is long overdue, said von Notz. “With EU reform to copyright law, Commissioner Oettinger has taken on a Hercules task. Time is ticking. It remains to be seen whether Oettinger will be able to keep his highly ambitious schedule, to table a concrete reform proposal within one year.”

The laws are intended to support fair remuneration for the production of original media content, but critics say they harm online entrepreneurship and innovation.

The European Commission held a public consultation for the review of its copyright rules, from December 2013 to March 2014, and aims to revise its legislation on copyright in the course of 2015.

The so-called "neighbouring rights" on publisher copyright, discussed above, are not included in the revision.