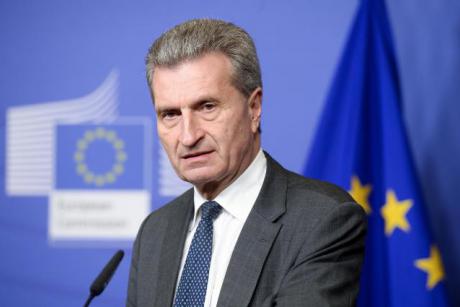 During a visit to Berlin, Digital Commissioner Günther Oettinger called for increased investment in Europe’s digital infrastructure, explaining that the economy alone will not be able to close the significant investment gap. EURACTIV Germany reports.

“We still do not have a digital internal market in Europe,” the EU’s Commissioner for the Digital Economy and Society, Günther Oettinger said on Wednesday (14 January) in Berlin.

Oettinger is calling for rapid expansion of quick, comprehensive internet access. It is one of the Commission’s priorities, along with the Council of Ministers, he said, to complete the digital internal market and overcome the current situation with 28 fragmented partial markets.

He spoke after a meeting with representatives of the Network Alliance Digital Germany, a group of telecommunications and network companies who have committed to working towards the government’s goal of comprehensive broadband coverage in Germany with a minimum of 50 Mbit/s by 2018.

It is clear, that a digital internal market cannot be realised without or against Germany, explained the Commissioner. “We have engaged in an intensive exchange over the issue of faster realisation of investments in infrastructure,” Oettinger said. But in the end, this is a task for the private economy, he explained.

While much is already being done by companies at European, national and regional levels, “a large investment gap still lies before us. The economy, alone, cannot close this fast enough,” the Commissioner indicated.

This is why a division of competences has been discussed, Oettinger said, saying the question is “how to mobilise funds under public law and co-financing contributions so that the infrastructure can be realised within this decade”.

German Infrastructure Minister Alexander Dobrindt asked for the federal budget and revenue from auctions at the federal level, the Commissioner indicated. “At a European level we have structural funds, which we would like to employ for co-financing, to a greater extent than had been done previously.”

At the European level, guidelines should be developed for financing expansion through funds under public law, the centre-right politician said, creating a reliable basis for all those involved. In the next few years, we hope to create assistance that is as flexible as possible, the Digital Commissioner commented. “It is a case of catch-up in the digital economy and in the digital infrastructure.”

The German Commissioner also spoke on the issue of net neutrality in Berlin on Wednesday. As the tech-magazine Golem reported, Oettinger intends to only make exceptions to net neutrality for offers that are in the public interest.

He said he supports special services for areas like health and disaster protection, but also for mobility services like automated driving. Entertainment services for videos and music, for example, are “not in the focus, when it comes to upward deviations from neutrality,” said the Commissioner. “I want one standard of quality for all, that is offered without discrimination.”

In December of last year, the German government agreed on a plan for internet use at different speeds. This was meant to maintain open internet access to all, while simultaneously allowing for the development of special services.

The government hopes to reach the target by means of a double rule: network providers shall continue to provide a fast and judder-free network for normal users. This ensures net neutrality. Once this is provided, companies are allowed to sell access to faster data highways for special customers at a cost.

Still, the level of protection could be “just under” that of German data protection, Oettinger reported. It has yet to be decided whether this means it should be an exhaustive rule or whether the member states should be able to set up additional rules. If the latter is the case, affected companies could – as they currently are in the EU – tend to shift to countries where standards are set the lowest, he said.

But the EU Commissioner seemed optimistic that the General Data Protection Regulation could be approved within this year.

In addition, Oettinger again emphasised his intention to table a draft for the modernisation of European copyright law by around September of this year. The former state prime minister of Baden-Wuerttemberg explained that he could imagine the “copyright directive” in the form of mixed legislation.

He explained that this could mean parts of the project might be enacted as a regulation that is directly applicable while other areas could be enacted as directives to be transposed into national law.

Oettinger said he is waiting on a debate over basic principles of this measure in the Council before presenting a draft.

Net Neutrality is a term referring to the freedom users have to access online services, such as Skype or Spotify, without experiencing a slower-than-usual connection.

Reasons to do so can be many. Net Neutrality paladins accuse ISPs of slowing free services to favour paid platforms. If this trend continued, the Internet would become something very different from the free environment it is nowadays, they claim.