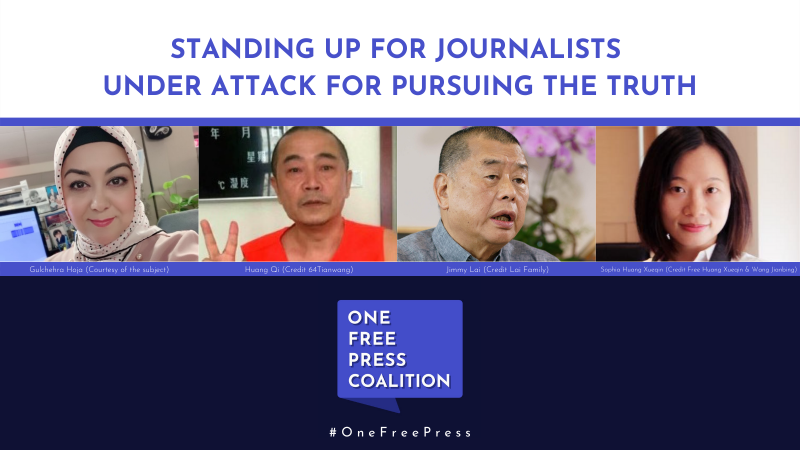 Ahead of the 2022 Winter Olympics in Beijing, the “10 Most Urgent” list for January 2022 focuses on the dire state of press freedom in China. Media outlets worldwide unite as the One Free Press Coalition to publish this list and draw attention to the most pressing cases of threats against journalists.

This past year, China continued to imprison and detain journalists without consequence, as well as weaponize surveillance and physically threaten journalists to censor them. According to CPJ’s 2021 census, China remains the world’s worst jailer of journalists for the third year in a row, with 50 behind bars. 2021 also marked a new concerning trend for the country, with the list including journalists held in Hong Kong for the first time since CPJ started collecting data in 1992.

Hong Kong media entrepreneur and democracy advocate Jimmy Lai Chee-ying is serving a 20-month prison sentence, while also awaiting trial on national security and fraud charges, facing a potential life sentence. Lai founded Next Digital Limited, a media company that published the pro-democracy newspaper Apple Daily and Next Magazine, both forced to close in 2021 due to pressure and ongoing threats from authorities.

It has been over one year since the independent journalist was sentenced to four years in prison for “picking quarrels and provoking trouble” after publishing videos critical of the government’s Covid-19 response. She has been on an ongoing hunger strike behind bars and is now in critically ill health.

Uighur writer, blogger and scholar Ilham Tohti is serving a life sentence on charges of separatism. He is the founder of the Uighur news website Uighurbiz, which was published in Chinese and Uighur, and focused on Uighur rights and social issues, and has been denied freedom since 2014.

Huang Qi, publisher of the human rights news website 64 Tianwang, is serving a 12-year sentence on accusations of “deliberately leaking state secrets” and “illegally providing state secrets to foreign countries.” He is critically ill and has been denied medical treatment, as well as denied visits and communication with his mother, who is dying of cancer.

Wan Yiu-sing, an internet radio host and commentator who covers political issues in mainland China and Hong Kong for the independent internet radio channel D100, was arrested by Hong Kong police in February. Wan’s arrest came amid authorities’ crackdown on Hong Kong’s pro-democracy movement. He is being held in detention while on trial for alleged sedition and money laundering, and was hospitalized last February due to undisclosed health issues.

Chinese freelance journalist Sophia Huang Xueqin disappeared on September 19, along with labor activist Wang Jianbin, one day before she was scheduled to board a plane to the United Kingdom to study abroad. On September 27, it was reported that both had been detained for allegedly “inciting subversion of state power” and are being held under “residential surveillance at a designated location,” a form of extrajudicial detention.

Fan is a reporter and producer covering breaking business news in China for Bloomberg News, and despite no charges being brought against her, she continues to be held in pretrial detention for allegedly endangering national security.

A reporter for Chinese-language human rights news website Weiquanwang, Zhou has published news and commentary on social media about labor issues and disability rights. Zhou is currently serving a sentence of three years and six months on charges of picking quarrels and provoking trouble, and he plans to appeal.

Uighur journalist Gulmire Imin is serving a 19-year, 8-month prison sentence on charges of separatism, leaking state secrets and organizing an illegal demonstration. In 2009, police arrested Imin, who wrote articles critical of the government that year, and she was one of several administrators of Uighur-language web forums who were arrested after the 2009 riots in Urumqi, in the Xinjiang Uighur Autonomous Region.

After joining Radio Free Asia in the U.S. in 2001, journalist Gulchehra Hoja was sent a “red notice” from China, banning her from returning home. Today, members of her family have been deliberately targeted with constant government surveillance and harassment and have endured numerous detentions in retaliation to her journalism and her work at Radio Free Europe, according to Gulchehra and IWMF. Following Gulchehra’s interviews with escapees, prison guards and other officials, in May 2019 she testified in front of the U.S. House of Representatives Committee on the dangers of reporting on human rights.