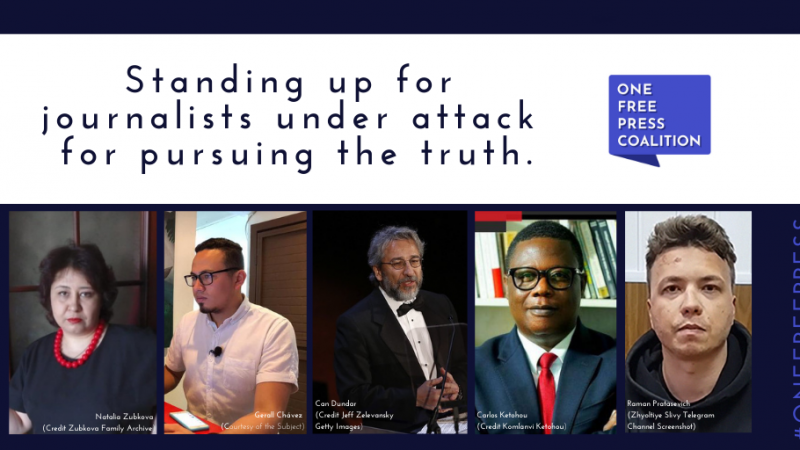 Ahead of World Refugee Day on June 20, the One Free Press Coalition releases its monthly “10 Most Urgent” list with a spotlight on journalists forced to flee their homes or go into exile, as well as threats faced by journalists reporting at borders.

The type of threats that force journalists to leave their homes can vary, ranging from sustained harassment, to physical and legal threats, or threats of imprisonment, all impeding their ability to live and work without fear. Journalists from all regions seek safety elsewhere when press crackdowns intensify, with recent examples in Myanmar and Ethiopia. Local journalists, unlike international journalists who may be able to move more freely, when faced with threats often have no other option than to leave behind their homes, and even their families. As CPJ found in a 2015 report, only about 17% of journalists who fled their countries were able to continue working during their time in exile.

Journalists in crisis situations looking for support and resources are also encouraged to reach out to IWMF and CPJ directly.

4. Pouyan Khoshhal (Iran)
Journalist imprisoned, fired and forced into exile for a single story continues to report on news and politics in Iran for IranWire and still faces a sentence if he returns to Iran.

5. Natalia Zubkova (Russia)
After facing an attack and death threats, journalist and her family were pushed into hiding—and forced to flee Russia—following her reporting on local protests as well as an alleged real estate scheme targeting disabled people.

7. Carlos Ketohou (Togo)
Director of Togolese outlet L’Indépendant Express forced to leave his home after security forces detained him, and his family received anonymous threats. Authorities have barred the outlet from publishing, and legal challenges are ongoing.

9. Gerall Chávez (Nicaragua)
One of the dozens of Nicaraguan journalists forced into exile since 2018, Chávez has continued to face threats even while living in Costa Rica, including ones directed toward his family, which remains in Nicaragua.

10. Humayra Bakhtiyar (Tajikistan)
Journalist and human rights activist covering politics and corruption was forced into exile in the EU in 2016, but remains outspoken even as she faces continued online harassment and threats from Tajik authorities directed at her family.