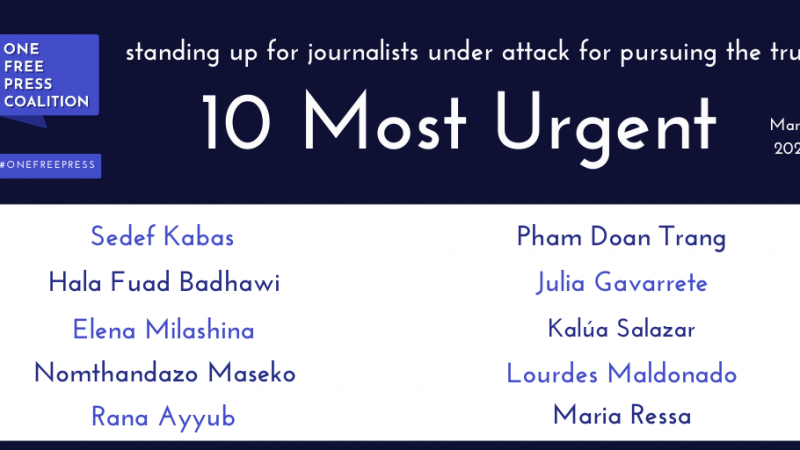 Journalists seeking guidance on digital and psychosocial safety can find them here, including tools for handling online harassment.

1. Sedef Kabaş (Turkey)
Authorities detained Kabaş, a freelance journalist and former television anchor, on January 22 for “insulting” President Recep Tayyip Erdoğan during an appearance on a political debate show, in addition to a charge for “insult of a public official.” Prosecutors asked to jail Kabaş for 11 years and 8 months on both charges. In February 2022, while Kabaş was in detention awaiting trial on that criminal insult charge, President Erdoğan separately filed a civil suit seeking $18,405 in damages.

2. Hala Fuad Badhawi (Yemen)
In December 2021, military intelligence forces in Hadramout province detained Badhawi, who is currently held in the central province prison. Colleagues believe Badhawi was detained because of her writing on corruption in the province. CPJ was told she will likely be referred to prosecutors on charges of membership in a terrorist cell, incitement to destabilize local security, and smuggling improvised explosive devices.

3. Elena Milashina (Russia)
An investigative reporter at Novaya Gazeta, Milashina has been forced to flee her home after threats from Chechen leader Ramzan Kadyrov. At least five journalists at the outlet have been killed since CPJ first started collecting data in 1992. Milashina is seriously concerned for her safety, and this is not the first time she has faced threats, as she and human rights lawyer Marina Dubrovina were beaten in the Chechen capital last March.

4. Nomthandazo Maseko (Eswatini)
Maseko, a reporter for the privately owned news website Swati Newsweek, was assaulted by correctional services staff after livestreaming a protest by members of the Swaziland Liberation Movement (Swalimo) activist group outside a local prison. When officers spotted her in her car, they hauled her out, slapped, kicked, beat her with sticks, and an unidentified officer pointed a gun at her and threatened to shoot.

5. Rana Ayyub (India)
Washington Post columnist and freelance journalist Ayyub has long been a victim of online trolling and retaliatory legal threats, but began receiving a renewed onslaught of threats on Twitter after she tweeted her criticism of Saudi Arabia’s government role in the ongoing Yemen war, receiving over 26,000 tweets in response, including rape and death threats.

6. Pham Doan Trang (Vietnam)
In December, Vietnamese authorities sentenced journalist Trang to nine years in prison. Trang covers human rights topics, including police abuses and environmental issues. Trang has faced harassment in the past for her reporting. Days before her arrest in October 2020, Trang released a letter titled, “Just in case I am imprisoned.”

7. Julia Gavarrete (El Salvador)
El Faro reporter Gavarrete is one of more than 30 journalists in El Salvador who discovered recently that they were a target of Pegasus spyware surveillance. Gavarrete covers politics, health, environment and gender for El Faro, and the outlet has been singled out alongside other independent outlets by President Nayib Bukele and other Salvadoran officials.

8. Kalúa Salazar (Nicaragua)
Salazar, editor-in-chief of radio and television outlet La Costeñísima, has faced ongoing legal battles, harassment and surveillance from authorities, including physical attacks and preventing her from leaving her home. Salazar told CPJ that she believes the harassment is tied to the outlet’s coverage and a desire to silence the work of La Costeñisima, one of the few independent media outlets in Nicaragua’s Caribbean coast.

9. Lourdes Maldonado (Mexico)
Maldonado, a veteran broadcast journalist, was shot dead in Tijuana this January. Maldonado had previously been attacked because of her work and was registered in the Mexican government’s program to protect journalists. She is one of five journalists killed in Mexico since the start of 2022.

10. Maria Ressa (Philippines)
Journalist Maria Ressa, a 2021 Nobel Peace Prize awardee, faces extreme threats in the Philippines, including state-orchestrated attacks against her and Rappler, the news organisation that she founded. This follows her conviction on a criminal cyber libel charge, part of ongoing efforts from authorities in the Philippines to silence any critical reporting.