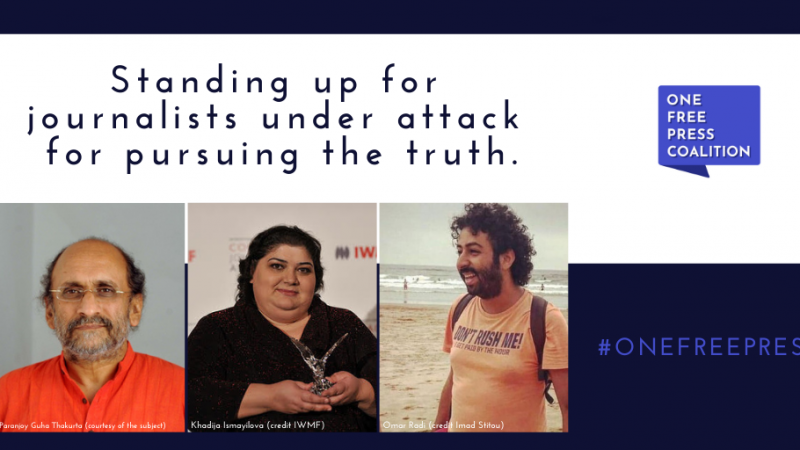 In light of growing reporting revealing the breadth and extent of the use of spyware to surveil journalists and governments weaponizing technology, the One Free Press Coalition chooses to focus its monthly “10 Most Urgent” list for October on cases of journalists who have been victims of surveillance or targeted by spyware, posing a threat to press freedom.

While surveillance of journalists is not a new phenomenon, the lengths to which bad actors will go to silence the press, and the rapid advancement of technology has exacerbated the problem.

Around the world, governments have used sophisticated spyware products designed to fight crime to target the press. Journalists say spyware has the potential to expose their sources, their movements and other private information that could be used to censor or obstruct them, or imperil them or their sources. CPJ has also found that these attacks often go hand in hand with other press freedom violations and hinders journalists’ ability to cover important stories on issues like politics and corruption.

Since 2018, Moroccan authorities have filed sex crimes charges against multiple independent journalists in the country in an effort to target them for their reporting. Investigative journalist Omar Radi is one of 180 journalists identified by nonprofit Forbidden Stories as targeted by surveillance spyware. This past July, he was sentenced to six years in prison on charges of sexual assault and undermining state security through espionage and illegally receiving foreign funding.

A prominent investigative journalist, Khadija Ismayilova is known for her exposés of high-level government corruption and alleged ties between President Ilham Aliyev’s family and businesses. She was sentenced to prison in 2014 and served 538 days before her release. In a forensic analysis of her phone, Amnesty International detected multiple traces of activity that it linked to Pegasus spyware, dating from 2019 to 2021.

Sevinj Vagifgizi, a correspondent for the Berlin-based, Azerbaijan-focused independent media outlet Meydan TV, was targeted by Pegasus spyware from 2019 to 2021. She has been previously in Azerbaijani authorities’ crosshairs and was banned from leaving the country from 2015 to 2019. In 2019, she faced libel charges after she reported on people voting with government-issued pre-filled ballots.

Reports find that, in 2019, Pegasus spyware by President Viktor Orbán’s administration targeted Szabolcs Panyi among five Hungarian journalists, as conditions for independent journalism become increasingly grim in the country. Panyi is a journalist at Direkt36.hu, known for reporting on issues like government corruption.

Throughout 2019 and 2020, Ricardo Calderón, then director of the investigative team at newsmagazine Semana, was the target of threats, harassment and surveillance related to reporting on the Colombian military, including efforts to monitor journalists. This year the Inter-American Commission on Human Rights ruled that Calderón faced “grave and imminent” danger from threats and surveillance by the Colombian military and other sources.

Paranjoy Guha Thakurta, a journalist and author, has faced protracted criminal and civil defamation suits, and was recently threatened with arrest. Amnesty International detected forensic indications connected to Pegasus spyware from early 2018 on his phone, when he had been writing about political parties using social media for political campaigning, and investigating a wealthy Indian business family’s foreign assets.

Citizen Lab, a University of Toronto team studying media, security and human rights, found that Pegasus spyware had infected the phone of Saudi Arabian dissident Omar Abdulaziz, who was in close contact with Washington Post columnist Jamal Khashoggi before his murder by Saudi operatives on October 2, 2018. Research has found that family and colleagues of journalists are often targets of surveillance.

After Javier Valdez Cárdenas, founder of Mexican outlet Río Doce was murdered in 2017, Río Doce’s director and his colleague received infection attempts to their phones with Pegasus spyware, with some of the attempts claiming to have information about Valdez’s death.

Aristegui Noticias, the outlet run by one of Mexico’s most widely known reporters, has exposed numerous corruption scandals. Carmen Aristegui has been heavily targeted, alongside her son (a minor) with NSO spyware links between 2015-2016, according to Citizen Lab.

Researchers report that prominent political blogger Ahmed Mansoor has been targeted by hackers multiple times, starting in 2011, when CPJ documented threats and legal action in connection with his blog.