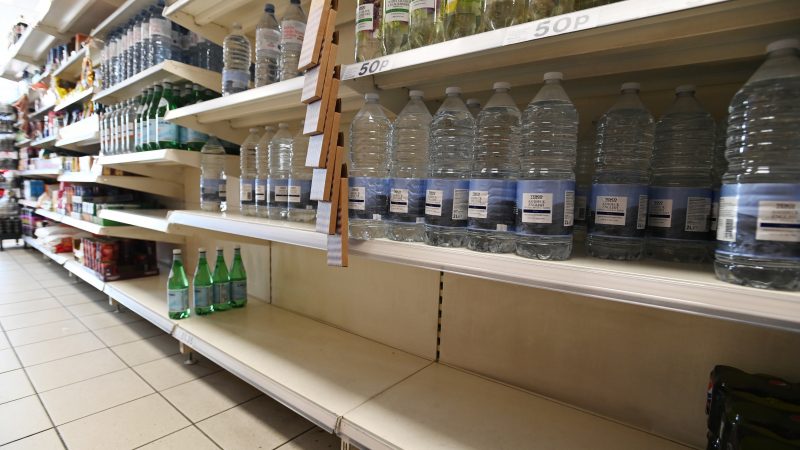 Half empty shelves at a supermarket in London, Britain, 22 July 2021. British supermarkets are struggling to stock shelves as staff shortages take their toll due to the so called 'pingdemic'. With so many staff going into self isolation after being pinged by the NHS app, supermarkets are now under increasing pressure to keep shelves fully stocked. [EPA-EFE/ANDY RAIN]

Britain’s supermarkets, wholesalers and hauliers were struggling on Thursday (22 July) to ensure stable food and fuel supplies after an official health app told hundreds of thousands of workers to isolate after contact with someone with COVID-19.

Coronavirus cases in Britain have been broadly rising for a month, with more than 44,000 recorded on Wednesday.

British newspapers carried front-page pictures of empty shelves in supermarkets. Reuters reporters said food items were widely available in London shops although there were some shortages of bottled water, soft drinks, and some salad and meat products.

He said he did not recognise Sky’s characterisation of “bare” supermarket shelves.

Britain’s second-largest supermarket group Sainsbury’s said customers would generally be able to find the products they want, though perhaps not every brand.

“We are working hard to ensure customers can find what they need,” said a Sainsbury’s spokesperson.

“While we might not always have the exact product a customer is looking for in every store, large quantities of products are being delivered to stores daily and our colleagues are focused on getting them onto the shelves as quickly as they can.”

Prime Minister Boris Johnson’s bet that he could reopen England’s economy because so many people have been vaccinated has been tarnished by the “pingdemic” in which people have been told by the contact-tracing app to isolate for 10 days.

The drastic reduction in staffing that has resulted has sown chaos through sectors as diverse as food supplies, haulage, supermarkets, hospitality, manufacturing and media. To avoid disruption, many have simply deleted the app from their phones.

British ministers say the app plays an important role in countering the spread of the virus and has allowed some workers in critical roles to carry on working.

The country has the world’s seventh-highest COVID-19 death toll and record new infections are forecast following the July 19 lifting of restrictions in England, characterised by Johnson as “freedom day”.

But a rapid vaccination programme that has seen 87% of adults receive one vaccine dose and more than 68% two doses appears to have weakened the link between infections and deaths, with daily fatalities remaining relatively low.

Many businesses said the situation was becoming grave.

Britain’s food supply chains are “right on the edge of failing” as absence related to COVID-19 has aggravated a critical shortage of labour, a meat industry body said on Wednesday.

Supermarket group Iceland said it has closed a number of stores due to staff shortages.

“We have a structural issue with (a shortage of) HGV drivers for a variety of different reasons, but of course the pingdemic has made it even worse,” Managing Director Richard Walker told ITV. “We are starting to see some availability issues.”

“Retail workers and suppliers, who have played a vital role throughout this pandemic, should be allowed to work provided they are double vaccinated or can show a negative COVID test, to ensure there is no disruption to the public’s ability to get food and other goods,” he said.

BP said it had to temporarily close a handful of sites due to a lack of fuel, with the shortage of HGV drivers being exacerbated by COVID-19 isolations.