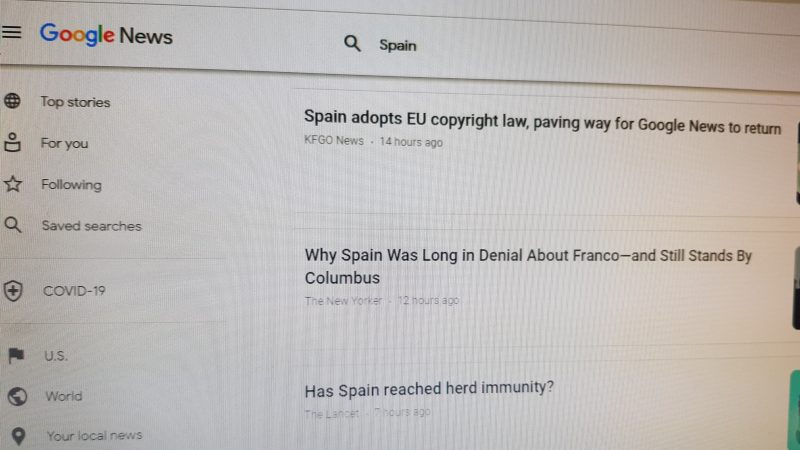 There is no Spanish version of Google news. This screen shows Google News hits in English with with key word 'Spain'. [Georgi Gotev]

Spain has adopted a European Union copyright directive that allows third-party online news platforms to negotiate directly with content providers, the government said on Tuesday (2 November), setting the stage for Alphabet’s Google News to return to the country.

Google News, which links to third-party content, closed in Spain in late 2014 in response to legislation that forced it to pay a collective licensing fee to republish headlines or snippets of news.

The EU legislation, which must be adopted by all member states, requires platforms such as Google, Facebook and others to share revenue with publishers but it also removes the collective fee and allows them to reach individual or group agreements with publishers.

Google said it wanted to bring its news services back to Spain but would closely analyse the law before making any firm commitment.

“Based on the initial information… conditions look promising for the potential launch of Google News in Spain. However, we will need to see the final law before making any formal announcements,” a spokesperson said in an email.

Spain’s Culture Ministry said the new law brought national copyright legislation into step with the digital environment and would help artists and creators to receive fair remuneration for their work.

Arsenio Escolar, chairman of the CLABE publishers association, which groups around 1,000 news outlets including leading digital brands such as El Espanol and Eldiario.es, said he was pleased with the new legislation.

“We are satisfied because media publishers have regained the reins of the management of our rights, hijacked a few years ago by a law that we at CLABE have always considered unjust and harmful,” he said in an email to associates.

Reuters reported in February that some publishers represented by the AMI media association, which represents mainly the old guard of traditional media, were in favour of maintaining the old system.