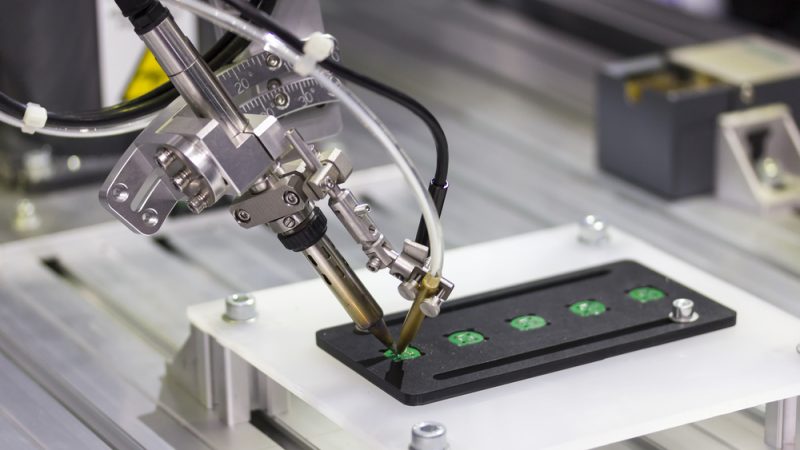 Car manufacturers especially are suffering historic losses, with production down by 38% in October compared to last year. [Surasak_Photo/Shutterstock]

A new discussion paper, issued on Thursday (4 November) by the German Electrical and Electronic Manufacturers’ Association (ZVEI), said that the return of semiconductor manufacturing capabilities to Europe is key for the technological sovereignty of Germany and Europe as a whole.

“We need to expand production capacity for chips of all structure sizes, in line with market dynamics,” the CEO of ZVEI, Wolfgang Weber, said in a statement. He added that Europe’s downstream industries will need both, high-performance chips of smaller sizes as well as the larger power electronics, sensors, and microelectromechanical systems.

Europe’s industries have witnessed production bottlenecks due to a global supply shortage of semiconductors in recent months. Germany is hit hardest, with over 40% of companies saying in a survey in August that they have lost sales due to the supply shortage.

Car manufacturers especially are suffering historic losses, with production down by 38% in October compared to last year.

To avoid these shortages in the future, the discussion paper includes several recommendations for the future development of an efficient semiconductor industry in Europe.

Most notably, the report emphasises that public funding mechanisms currently in place should be improved and project approvals speeded up.

This is a reference to the Chips Act, an EU initiative expected next year, which according to the study should also aim to create a more favourable environment for investments, like tax incentives or the boosting of skills.

DigitalEurope, a European trade association, also stated that the expansion of production capacity should be mainly driven by market demand instead of political imperatives and that the “proposed EU Chips Act must listen to industry to see what the needs are, and not be driven by politics,” Cecilia Bonefeld-Dahl, Director-General of DigitalEurope said in a statement.

The European Commission has made it one of its top priorities to bring semiconductor production back to Europe. Thierry Breton, the EU’s internal market commissioner, aims to double Europe’s share of global chips production from 9% to 20% and boost investments by €20-30 billion by 2030.

The plans have already been outlined in the EU Digital Compass and are expected to be further elaborated in the upcoming EU Chips Act.

The Commission also seeks to encourage the production of cutting-edge semiconductors in Europe by 2030. While most of the chips currently produced in the EU are 14 nanometers or bigger, Breton wants to lessen dependencies on Asia by funding chip manufacturing of 2 nanometers.

However, some critics consider this approach will not bear any tangible results, as Europe has already lost its footing in this sector.

“There is no good leverage to get back to a competitive or even leading position” in these areas, said Stefan Mengel, head of division at the German federal ministry of education and research who spoke at an event on Tuesday (2 November).

The envisioned €20-30 billion in investment until 2030 also pale in comparison with Europe’s global competitors. South Korea, one of the market leaders in chips production, plans investments of over $400 (€346) billion in the same period.

The German electronic industry association estimates that at least €25 billion needs to be invested every year in order to bring Europe back on track. To make more funding available, the ZVEI paper recommends tapping into the EU’s €800 billion coronavirus recovery fund, called ‘Next Generation EU’.

However, several voices are highly sceptical of the EU’s strategy, warning that the costs may end up outweighing the benefits.

A report by the International Data Corporation (IDC) even pointed out that there might be an overcapacity of semiconductors by 2023, putting the necessity of huge public investments into doubt.

Given that the semiconductor market is expected to double by 2030, meeting the target of having 20% of global production in Europe would require increasing the production capacity in the bloc by a factor of four, IDC remarks.

And even if Europe would manage to meet the 20% target by 2030, the dependence on Asia would not be lessened, as global value chains are too intertwined and too reliant on producers in East Asia.

“I think we should give up this kind of general dream of autonomy and more think about how we can gain leverage and make sure that our interdependency is not leveraged against us,” said Nicolas Poitiers, a research fellow at the Bruegel economic think-tank in Brussels.