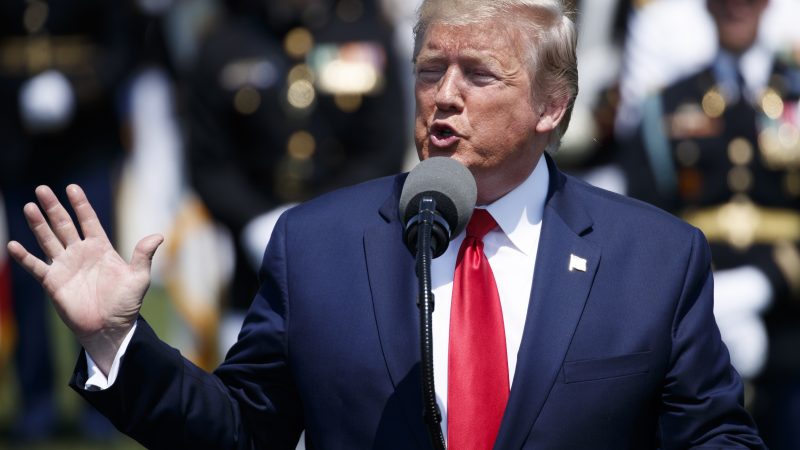 US President Donald Trump threatened to tax French wines on Friday (27 July) in retaliation for France’s recent proposal to levy a tax aimed at big US technology companies.

Trump had told French President Emmanuel Macron last week that he was concerned about the proposed digital services tax.

“If anybody taxes them, it should be their home Country, the USA. We will announce a substantial reciprocal action on Macron’s foolishness shortly,” Trump tweeted on Friday. “I’ve always said American wine is better than French wine!”

Later in the Oval Office, Trump told reporters the tax decision was wrong and he threatened the key French export.

He said a few minutes later that the U.S. response would be announced soon, saying that it “might be on wine, it might be on something else.”

Trump and Macron spoke by telephone on Friday and discussed the tax and next month’s summit of the Group of 7 rich nations in France, the White House said.

Macron’s office said the French leader “underlined that the G7 summit would be an important opportunity to move towards a universal taxation of digital activities, which is in our common interest, and which we need to keep working on in order to obtain a broad international agreement.”

French Economy Minister Bruno Le Maire said in a statement after Trump’s tweet that “the universal taxation of digital activities is a challenge that concerns all of us. We want to reach a deal on this within the framework of the G7 and the OECD. In the meantime, France will move ahead with national decisions.”

He added, “The administration is looking closely at all other policy tools.”

Two weeks ago, the French Senate approved the 3% levy that will apply to revenue from digital services earned in France by companies with more than 25 million euros in French revenue and 750 million euros ($834 million) worldwide.

Other EU countries, including Austria, Britain, Spain and Italy, have also announced plans for their own digital taxes.

They say a levy is needed because big, multinational internet companies such as Facebook and Amazon are able to book profits in low-tax countries like Ireland, no matter where the revenue originates.

Earlier this month, the United States threatened tariffs on an additional $4 billion worth of European Union goods, including wine, cheese and whiskey – that could be hit with tariffs as part of a nearly 15-year-long dispute at the World Trade Organization over aircraft subsidies given to US planemaker Boeing Co and its European rival, Airbus SE.

The EU’s director general for trade, Sabine Weyand, this week said she expected the Trump administration to proceed to implement some of the tariffs after a WTO arbitrator ruled on the damage caused to Boeing as a result of illegal EU government aid to Airbus.

The US Trade Representative’s Office (USTR) last month said it would hold a hearing on Aug. 19 in its probe of the planned tax, which could lead to the United States imposing new tariffs or other trade restrictions.

USTR could issue new tariffs on French goods after the public comment period closes on Aug. 26.

USTR said the levy was an “unreasonable tax policy.” The plan departs from tax norms because of “extraterritoriality; taxing revenue not income; and a purpose of penalizing particular technology companies for their commercial success,” it said.

The tax is due to apply retroactively from the start of 2019, which USTR said calls into question its fairness.