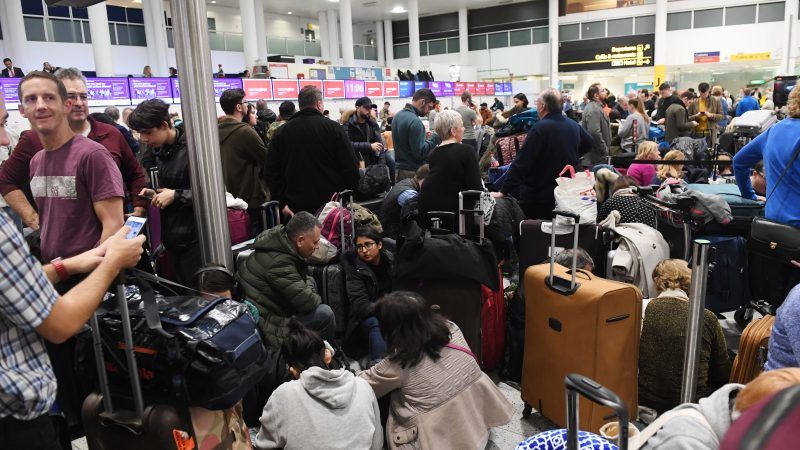 Passengers wait within Gatwick airport in Sussex, southeast, England, 20 December 2018. According to media reports, the runway for Britain's second busiest airport Gatwick was shut down by authorities after sightings of drones flying near the airport. [EPA-EFE/FACUNDO ARRIZABALAGA]

Tens of thousands of airline passengers in the UK have been left stranded after a suspicious sighting of two drones circling in the vicinity of Gatwick airport, prompting security authorities to halt flights late on Wednesday evening (19 December).

UK police forces said on Thursday they believe the actions were a deliberate attempt to disrupt service, but that the incident was not terror-related.

“Public safety is paramount and we will take all available actions to disrupt this deliberate act,” Sussex Police said in a statement. There are currently 20 security units on the lookout for the drone operators.

Speaking on BBC radio, Gatwick’s Chief Operating Officer Chris Woodroofe, described the drones as being of a heavy, industrial nature.

“It’s definitely not a standard, off-the-shelf type drone,” he said. “Given what has happened I definitely believe it is a deliberate act.”

“We also have the helicopter up in the air but the police advice is that it would be dangerous to seek to shoot the drone down because of what may happen to the stray bullets,” he added.

Meanwhile, little is known as to when normal service will resume at the airport.

UK law states that it is illegal to fly drones within 1 km (0.62 mile) of an airport perimeter, an indictable offence for which the perpetrator can face up to five years in prison.

At an EU level, new rules were adopted this year that seek to ensure the safe use of drones above Europe’s skies.

Under the measures, drones are required to be designed so that they can be operated without putting people at risk. Such metrics that would influence a risk categorisation would include the weight or the drone or the area of operation, for example.

The EU has also called upon manufacturers to install additional safety features in drones in the case of an emergency, such as automated landing systems which would need to be put to use in order to avoid a collision, or when an operator loses remote contact with a drone.

Gatwick airport has apologised to passengers affected by the disruption, saying that all flights remain suspended for Thursday.

Multiple sightings of the drones have been reported since Wednesday evening. “These drones have disappeared and then reappeared all night and are, as I speak to you, on our airfield now,” Woodroofe said on Thursday morning.