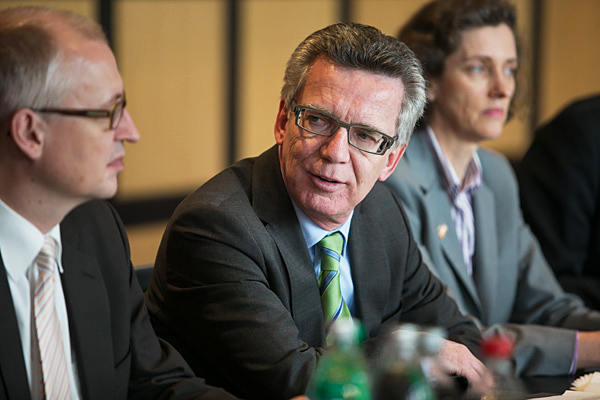 German Minister of Internal Affairs Thomas de Maizière attends a round table with IT experts in Washington D.C. [German Embassy to the United States]

Germany has called for global standards to protect people’s privacy on the Internet in the run-up to a “cyber dialogue” opening in Berlin today (27 June), less than a year after US intelligence services were caught red-handed tapping Angela Merkel’s mobile phone. EURACTIV Germany reports.

Ahead of the first round of a so-called cyber dialogue with the United States, the German Interior Minister, Thomas de Maizière, called for better protection of privacy on the Internet.

“We must come up with new additional instruments for the protection of personal rights of our citizens and we need global standards”, de Maizière explained on Friday (27 June) in Berlin.

The statement came after the Minister held a joint meeting with John Podesta, the advisor to US President Barack Obama on the issue.

According to the German Ministry of the Interior, de Maizière and Podesta exchanged ideas over “further developing their respective data protection initiatives”.

De Maizière welcomed the first pledge from the United States, in the context of negotiations over an EU-US data protection agreement, to give EU citizens the possibility of legal action to protect their privacy in the United States.

Speaking in Berlin on Friday, he called it a good and encouraging sign: “It was a demand which we have been pushing for a long time. Finally something is moving. That is very pleasing.”

Now it is important to continue this constructive path in negotiations toward the agreement, he said, and finally come to a conclusion.

Meanwhile, the first round of the cyber dialogue began in the Foreign Office in Berlin. In February, Foreign Minister Frank-Walter Steinmeier and his US colleague John Kerry had agreed to initiate the talks as a reaction to the NSA surveillance scandal.

Under the heading “Ensuring Security and Freedom”, around 100 participants from politics, government, economy and civil society hailing from both sides of the Atlantic discussed issues regarding the digital future.

Kicking off the dialogue, Steinmeier called for common standards in the protection of privacy on the Internet.

“Data is power and power must be subject to rules”, Steinmeier said on Friday in the first round of talks in Berlin.

In his introductory speech, the foreign minister expressed his understanding for US security interests, with which the Americans justify their detailed internet surveillance. No one has experienced the dangers of our global community in such a “painful” way as the United States did on 11 September, 2001.

But the fears faced by many Germans “of an all-powerful state” and “that the age of ‘Big Data’ will become an age of ‘Big Brother'” must also be taken seriously, Steinmeier said.

We must continually re-evaluate “which assurances in security we want to have in exchange for what amount of freedom”. Rules of the game for the “widely uncharted territory” of the Internet must also apply to “our intelligence services”, Steinmeier emphasised.

In his speech, Podesta indicated the US government’s efforts to pin down privacy protection measures for foreign citizens and impose stricter rules on intelligence agencies for data collection. The United States wants to prove to Europe and people in the world that the surveillance of normal citizens is not our business, he said.

During the course of the debate over reforming the NSA, Podesta was personally assigned by President Obama to draft a reform report called “Big Data & Privacy”. The report, presented in April 2014, contains reform recommendations including a proposal to extend US provisions to protect the privacy of non-US citizens.

Germans were up in arms after disclosures over mass-surveillance of German citizens by foreign intelligence services came out last year. The United States considers internet surveillance an indispensable tool in the fight against terrorism.

All talk and no action

But network activist Linus Neumann does not expect any concrete results from the cyber dialogue. “I am certain that a great many nice, colourful speeches will be held at the cyber dialogue and that the words ‘protection from terrorism’ will come up regularly”, Neumann said on Deutschlandradio.

Good intentions, democracy and clear limits will be key words, he said, that will come up in every speech but nothing concrete will come out of it all.

“I ask myself what is actually new here,” said Marc Rotenberg from the US organisation Electronic Privacy Information Center at the Berlin event. Above all, he called for better possibilities enabling citizens to encript their data.

Meanwhile the Left Party (Die Linke) faction in the Bundestag accused the German government of having no intention to clear up the NSA scandal. The fact that the German government is not exerting any pressure on its US counterpart, explained vice faction leader Jan Korte, has to do with “its totally sovereign decision to join in the surveillance”.

Whistleblower Edward Snowden revealed early in 2013 that the US authorities had tapped the servers of internet companies for personal data.

It later emerged that some European leaders, including German Chancellor Angela Merkel, had their mobile phones tapped.

>> Read: Merkel's phone tapped by the US, Germany claims

Europeans have reacted angrily, saying such activity confirmed their fears about the reach of the government and American web giants and showed that tighter regulations were needed just as the EU and US have launched landmark trade talks.

At an EU summit on 24-25 October 2013, German Chancellor Angela Merkel demanded that the United States strike a "no-spying" agreement with Berlin and Paris by the end of the year, saying alleged espionage against two of Washington's closest EU allies had to be stopped.

Germany and France said they will seek a "mutual understanding" with the United States on cooperation between their intelligence agencies, and other EU member states could eventually take part.

>> Read: Germany, France demand ‘no spying’ agreement with US