At CYBERSEC, European leaders to debate how to secure Europe’s Digital Decade 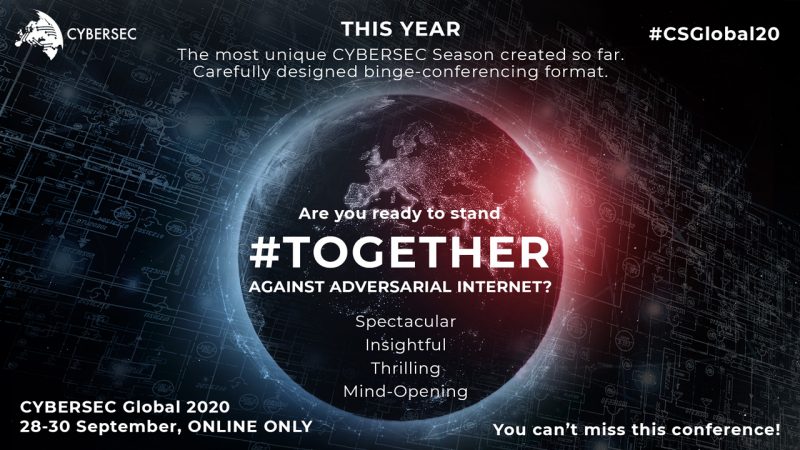 Known for their visionary approach to digital change, the politicians are going to speak on the first day of the conference along with Vice President of the European Commission Margrethe Vestager and NATO Deputy Secretary-General Mircea Geoană.

This year’s forum, done entirely online, is taking place from 28 to 30 September.

Launched in 2015, CYBERSEC is a successful and acclaimed annual public policy conference dedicated to strategic security aspects of the global technology revolution. It’s not only a conference – it has become a thriving international community of experts and professionals.

Each year, invited are the world’s top-class experts urging the conference participants to think outside of the box, making each CYBERSEC more innovative than the one before.

Nearly the entire world has been forced by the COVID-19 pandemic to move a large part of business and administration activity online. Overnight, each country’s, institution’s, and organisation’s readiness for compulsory and accelerated digital transformation was put to the test.

Estonia, consistent in digitalising its state governance and building a cybersecurity system since the spectacular 2007 cyberattack, had no trouble whatsoever passing this exam. President Kaljulaid explained many a time what actions and digitalisation approaches are the secret of E-stonia’s success.

The country where internet access is every citizen’s constitutional right, where all important public and administrative services are available on electronic platforms, and the system security is safeguarded by a cloud backup.

– For the European countries to follow the digital leader’s path, it is essential to exchange knowledge and experiences between the EU members.

A year ago, when President Kersti Kaljulaid was receiving the European CYBERSEC Award she had earned for her contribution to cybersecurity development, she said that “no country is able to guarantee internet system security on its own.

To be able to think about applying analogue law to cyberspace, working towards a common understanding on the international arena is needed”. We share this view, that is why this year the motto of the conference is ‘Together Against Adversarial Internet’.

We want to highlight that nothing but joint action of like-minded countries can translate into the security of the new digital world which we’ve been operating in since the pandemic – explains Izabela Albrycht, CYBERSEC Forum Chair.

The same view is shared by prominent CYBERSEC special guest speaker, the Armenian president Armen Sarkissian who wrote recently in the Financial Times, that “the pandemic is accelerating the transformation of the classical world of the 20th century and before into a quantum world where change is faster and more unpredictable and this is all powered by the world wide web”.

Estonia’s actions as the digital leader are also watched closely by the European Union, which since the pandemic broke out has launched a range of initiatives that place secure digital transformation among the priorities.

In this context, the crucial element is the initiative of EU institutions in preparing new regulations for the advancing digitalisation processes, which could serve as a model for the rest of the world.

A case in point is 5G Toolbox, the set of measures to reduce risks in fifth-generation network cybersecurity approved by the European Commission, or the already begun revision process for the NIS Directive – the first European law on cybersecurity.

The progress in this respect, given also President of the European Commission Ursula von der Leyen’s address which announced earmarking for digital projects 20% of the 750 billion euro in the recovery fund to rebuild economies after the pandemic, will be recounted by the process supervisor, Vice President of the European Commission Margrethe Vestager.

The upcoming CYBERSEC is going to be fundamentally important for the public debate on technology development directions as regards not only the European Union but also NATO.

Many technologies are dual use, with both civilian and military applications, hence for some time NATO has been putting heavy emphasis on establishing policies on innovative solutions, consulting in strategic aspects of disruptive technologies, and trailblazing inventive research.

These are the main tasks of the twelve-strong Advisory Group on emerging and disruptive technologies appointed by NATO Secretary-General Jens Stoltenberg; among its members is Izabela Albrycht.

In NATO, the person responsible for this process is Deputy Secretary-General of NATO Mircea Geoană, who along with CYBERSEC Chair will be one of the main guests to inaugurate this year’s conference.

Mirroring past editions, this year’s CYBERSEC will be composed of four thematic Streams. The first one, the State Stream, will focus on the multi-faceted problem of how tech should be regulated for it to develop in a secure manner without slowing down its natural progress.

Topics in this Stream include global surveillance, digital governance, and decoupling in the digital supply chain. The second one, the Future Stream, deals with finding a measured approach to emerging and future technologies and the possibilities and challenges they’ll likely bring to the fore.

It will tackle important issues such as quantum computing, threats to digital identity, and human-level artificial intelligence. Next to it comes the Business Stream, focused on the private sector – the main provider of technology and as such remaining on the very frontline of innovation, research, and development.

Here the debates will home in on themes such as countering adversity in the data-driven economy, the role of technology providers in ensuring a peaceful internet, COVID-19 redefining critical sectors of economies.

Finally, there’s the Defence Stream focusing on the technological developments of the military sector and its implications for international security. Expect subjects such as the military use of 5G, information warfare, and cybersecurity of outer space among others to be discussed on this Stream.

While historically, this conference has been centred on Europe, this year’s event will extend its range to discuss and tackle truly global strategic cybersecurity challenges by including high-profile names from countries such as Australia, New Zealand, Japan, South Korea, Taiwan, Singapore, India, South Africa, Israel, and UAE.

It will be also open and free for everyone interested in broadening their knowledge and getting insights about cybersecurity and how new technologies affect geopolitical shifts and strategic competition between global players.

For more information about the CYBERSEC Global 2020 and for the registration process, visit the website https://cybersecforum.eu.