Digital Services Act: a media exemption would open a loophole for disinformation 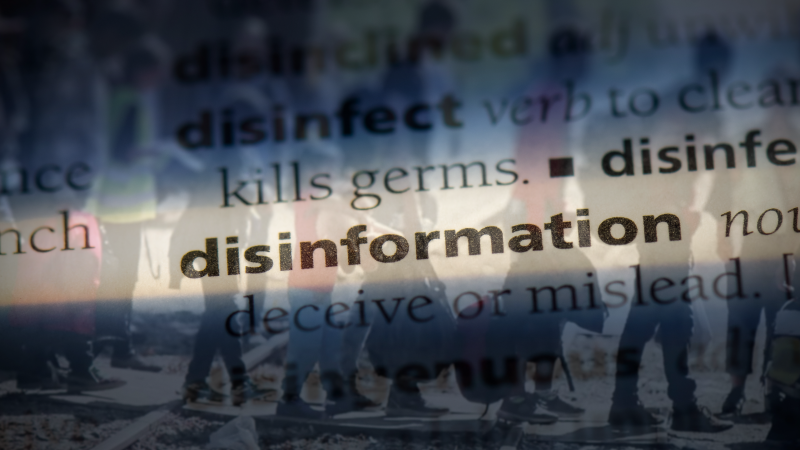 A carve out for media in the EU’s Digital Services Act would leave a dangerous loophole in legislation that is desperately needed to tackle disinformation, writes Diana Wallis. [Shutterstock/Fishman64/Casimiro PT]

A carve out for media in the EU’s Digital Services Act would leave a dangerous loophole in legislation that is desperately needed to tackle disinformation, writes Diana Wallis.

Back in 2018, Guy Verhofstadt, the leader of my former political family in the European Parliament tweeted: “Fake news & disinformation spread by Russia & others is a threat to liberal democracy in Europe… If platforms like Facebook don’t get their act together, they will face regulation!”.

The time for such regulation is now.  Going back centuries, disinformation has always been present in democracies. Disinformation is like a parasite that if allowed to grow and persist, will eventually kill its host. While social media platforms did not create disinformation, they have allowed it to spread and grow in ways never previously imagined, like a new cancer variant spreading out of control. The stakes are just too high to allow social media platforms to continue unregulated and be allowed to sacrifice truth, decency, and democracy itself for the sake of an algorithm designed to inflame passion over reasoned public dialogue. The Digital Services Act (DSA) is designed to establish a regulatory framework that will set out some ground rules to combat disinformation. However, some are seeking to undermine that goal by carving out exemptions that will render the new law useless.

As the EU moves towards thoughtful regulation to preserve democracy, many of Mr. Verhofstadt’s colleagues in the Parliament are on the brink of undermining meaningful regulation and instead supporting positions in favour of forbidding platforms like Facebook from exercising any type of moderation on foreign interference and disinformation matters.

In the last months, compromise discussions on the Digital Services Act have resulted in support for an amendment that would, according to several versions circulating, forbid platforms from “removing”, “disabling access to”, “suspending” or “interfering with” content by press publications or “editorial content providers”. In other words, any organisation that publishes regularly on a topic with an intention to provide information to the public would be exempted from moderation or as otherwise designated exempting ”the media”.

Understanding the role of online media in disinformation

The history of disinformation is intertwined with all kinds of media. Today’s social media platforms, driven by advertising and opaque algorithms, clearly have an outsized role in the amplification of disinformation and misinformation. The reality is that no media is immune from disinformation. Of course, pseudo-media with poor journalistic standards can be an all too useful tool for disinformation actors to utilise in order to spread their dangerous narratives, but more mainstream news sources with strong reputations and visibility are equally prime targets for those seeking to disinform at scale (a process disinformation experts refer to as ”content laundering”). Therefore, a carve out for media in the EU’s Digital Services Act would result in a dangerous loophole in this legislation that is so desperately needed to tackle disinformation in all its forms.  The exception will become the rule and render the Digital Services Act meaningless.

Disinformation researchers are alarmed at the prospect of certain MEPs giving support to such an amendment. There is a need to understand the processes by which disinformation circulates and how even respectable media outlets can be misused. For years, platforms have been named and shamed as being the guilty parties for the disinformation amplified on their platforms. The “actors” of disinformation have been overlooked, as if the amplifier was the one and only culprit. This is far from the reality. Today, researchers on disinformation would struggle to name a single large influence operation that did not use a “media” outlet to camouflage its operation. The practice is well established, with its origins in information operations, notably during the Cold War, as Thomas Rid explained in his recent book, Active Measures: The Secret History of Disinformation and Political Warfare.

Recent disinformation campaigns and a review of disinformation in the 20th century teach us one clear lesson: the manipulation of media or journalists is a central tool for disinformation. So, in a sense they need the protective cloak offered by the legislation, not a carve out from it. Disinformation gnaws at our democracy by manipulating our anxieties about protecting freedom of speech and a free ”press” or media. Of course, we want a free, vigorous and investigative media in all its diversity, yet take a look at how the title media can be used.

Over the past three years, the EU DisinfoLab has published nine open-source investigations. Eight out of nine used online media outlets as the core element of their influence operation. The one that did not own a media directly was centred around a network of accounts cutting and framing videos produced by other media. In other words, all of them needed media to serve their propaganda, COVID-19 disinformation or foreign interference operations.

What will happen if the Digital Services Act exempts media from any type of moderation?

The fight against disinformation will become well nigh impossible if the European Parliament votes to include a general exemption for all media services and publishers from being moderated in the DSA. For several reasons.

First, the current labelling of Russia Today on Facebook (“as Russia state-controlled media”) would be deleted, by law under the media exemption. The Indian actors behind the large 15-year influence operation targeting the EU and the UN will be invited to re-open the defunct EP Today and EU Chronicle, this time knowing that our work will not lead to a closing of their online accounts.  Observateur Continental and OneWorld, two media outlets we tied to Russian military intelligence (GRU), will be given a free ride and offered an opportunity to expand. FranceLibre24, an online media we exposed in January 2020 that concealed its ties to a Polish far-right network in order to spread polarising narratives in French on identity, religion and immigration, considered by Newsguard as the leading source of COVID-19 disinformation in French, will remain online, this time without the current label “Visit the COVID-19 Information Center for vaccine resources”.

And what about media freedom?

I would ask: how many times have we seen Le Monde, Der Spiegel and le Corriere della Serra being censored? Extremely rarely. These amendments would attempt to fix a problem which barely exists while building a motorway for disinformers and illiberal regimes wishing to divide us even more.

MEPs and those in the Council working on the Digital Services Act need to consider the risks for the fight against disinformation of a media exemption. If we are serious about regulating platforms and reducing the circulation of mis and dis-information, they should make sure any media exemption is rejected.

To quote Rolf Wagenbreth, former colonel of the Ministry for State Security (MfS “Stasi”) and head of Department X of the Central Enlightenment Administration (HVA), the of the German Democratic Republic (GDR) foreign intelligence service, responsible for “disinformation”, “what would active measures be without the journalist?”