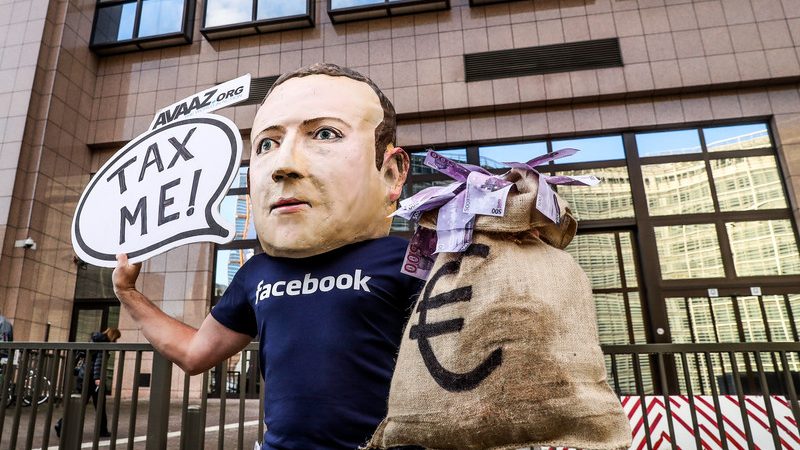 The European Commission wants to create a Europe fit for the digital age. Its digital tax proposal goes in the opposite direction, argues Jörgen Warborn. EPA-EFE/STEPHANIE LECOCQ

The European Commission wants to create a Europe fit for the digital age. Its digital tax proposal goes in the opposite direction, argues Jörgen Warborn.

Jörgen Warborn is a Swedish MEP in the European People’s Party group.

The EU is falling behind in global digitalisation. As the US and China have entered a tough contest about world leadership in digitalisation, Europe still stands with legislation unfit to lead the way in the same direction. Europe’s lack of digital success stories is proof of a fractured internal market for digital services and data, as well as a business climate far from good enough. Businesses are over-regulated and under pressure from ever-increasing tax burdens at national levels. An EU-level digital tax would hardly make the future brighter.

One of the paramount priorities of the von der Leyen Commission is to create a Europe fit for the digital age. I greatly welcome this focus, as policy development in the digital field is a necessity if Europe is ever to catch up with other major economies on digital innovation and create long-term growth. This ambition must not end at fine words on paper, but be backed up by concrete policy measures improving the business and innovation climate, spurring deployment of digital infrastructure and safeguarding the digital sector from burdensome taxes and regulations.

Unfortunately, the Commission has entered on the opposite path, dusting off ideas from the past about imposing an EU-wide tax on parts of the digital sector. In order to pay for the gigantic amounts in the new Recovery Fund, the Commission wants to impose economic burdens on the very same sector they say is crucial to re-start the economy after the crisis. This doesn’t make sense.

One must only look at the basic logic of taxes in order to understand why an EU digital tax would be counterproductive in today’s situation. Taxes on cigarettes and alcohol were introduced to make people smoke and drink less. Carbon taxes are continuously increased to reduce emissions. Increased payroll taxes are known to reduce the number of working hours in the economy. What brings anyone to the conclusion that a digital tax would not hinder and roll back digitalisation?

The call for a digital tax is problematic in itself, but the planned construction of the tax is actually worse. The European Commission wants to base it on the turnover of the company, not on its eventual profits. Anyone who has any idea of the processes that lead from the engineers’ sketchbooks to a final functioning digital service platform knows how hard such a tax design would hit. There is hardly a single successful digital service provider that didn’t spend tens of millions of Euros, and had years of losses before making any profits. This is the nature of the digital sector, and something to bear in mind when talking of taxation. Any turnover-based system would effectively hurt the potential for innovation and development, and keep businesses on the way up from becoming truly successful.

In a report, the European Centre for International Political Economy (ECIPE) also points out a problematic downstream effect on the SMEs dependent on these digital services (2), as a large share of the costs generated by the tax would ultimately be transferred to them. Around 40 percent of SMEs already sell their goods and services online (3) and are thus at risk of being indirectly hit by the Commission’s digital tax proposal. The European Commission fails to give any evidence of how a digital tax constructed in a way that fundamentally differs from normal taxation principles, targeted on one of our economy’s most crucial sectors, would actually be in Europe’s interest.

What may look like a quick and smooth way to collect resources for the EU budget may actually in the long run erode European wealth and undermine the legitimacy of European tax systems. The signal sent by this proposal is that Europe is not the place to become successful in the digital sector. Innovative entrepreneurs and growing enterprises will look across the ocean for a better business climate and more encouraging politicians. This would make Europe even more dependent on foreign internet giants. Quite the opposite of what one could believe would be the intention of such a tax.

Financing the new EU Recovery Fund must be done by scrutinising current expenses and abolishing those that are not creating long-term growth and European added value – not by taxing the very sector with the greatest potential to lift us out of the crisis. If the European economy is to pick up speed and re-take its rightful power on the global arena, we will need to pave the way for innovative digital enterprises and increase EU competitiveness.The European Commission must scrap its plans for a digital tax.