By Paul Tang and Udo Bullmann 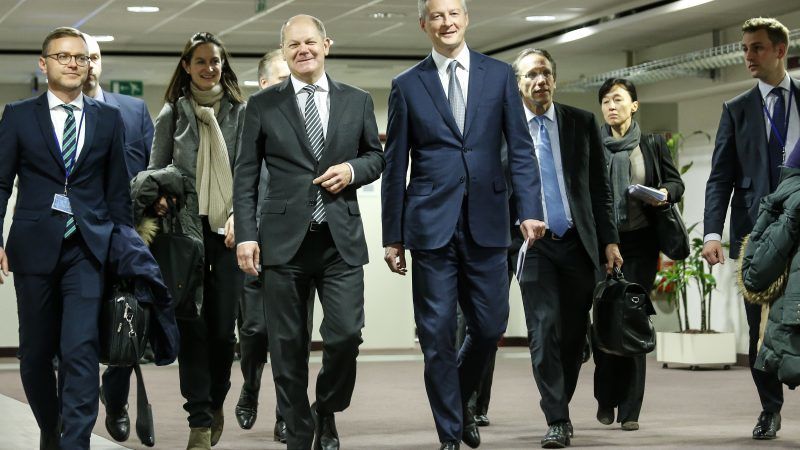 When European finance ministers meet on Tuesday (4 December), they should swiftly adopt the digital service tax: a levy on turnover for very large digital firms such as Google, Apple, Facebook, Amazon, Booking and Spotify, write Udo Bullmann and Paul Tang.

Udo Bullmann is president of the Socialist and Democrats (S&D) political group in the European Parliament. Paul Tang is an S&D MEP from the Netherlands.

The tax could generate up to €10 billion of much-needed public revenue every year to promote sustainable economic growth, job creation and provide essential public services.

While ordinary citizens and small firms pay their taxes where they live and work, large multinational online companies get away with paying close to zero taxes. Last March, the European Commission revealed that the digital sector was paying 9.5% of corporate tax while other traditional sectors were paying on average 23%, more than double. In 2017 alone, Amazon made approximately €25 billion in revenues in Europe but managed to pay close to zero taxes.

Today’s tax regimes are outdated by globalisation and digitalisation. Designed at the beginning of the 20th century, for a bricks-and-mortar economy, they no longer work for our increasingly digitised economy. Additionally, diverging national tax rules and loopholes make tax avoidance and evasion basically a child’s game. The Paradise Papers’ revelations have shown how multinationals capitalise on this regulatory cacophony by employing elaborate tax constructions through which profits and wealth are shifted to tax havens where the tax rates are low or even zero.

Online companies are particularly prone to this. They benefit from little physical presence in Europe and can thus choose to repatriate profits to the most tax-friendly state. By doing so, they are driving the competition between member states and leading a race to the bottom on corporate taxation.

Unless the rules of the game are changed, unfair taxation and decreasing tax rates will go on. Taking necessary steps and making the much-needed reforms requires time, but most importantly leadership: European Leadership.

Our best way to foster international discussions is a European initiative that ensures that digital companies pay their fair share as of tomorrow. The best option on the table would be to adopt the digital service tax as proposed by the European Commission, preferably with a higher rate of 5% on an increased scope also entailing revenue out of digital content like Netflix and e-commerce like Amazon.

Second best would be to decide now on a contingency solution, which would automatically come into force if international negotiations in the OECD fail to deliver on taxing the digital economy.

This compromise could unite the positions of France and Germany. A robust guarantee that a European digital service tax will come into force, with a clear deadline of December 2020, is needed to put pressure on the usually ineffective global regulatory process. Only a credible threat of a regulatory backlash will bring the United States to the table of the OECD on a multilateral solution on taxing the digital economy.

We risk missing this window of opportunity for the EU to deal with taxing digital companies. Postponing a decision for another two years is not an option. We demand action to stop this injustice of low or no taxation on the profits made by these firms in Europe.

We call on European Finance Ministers to deliver on a solution: Now. To ensure the digitalisation of the economy does not lead to a heavier tax burden for employees or small business. Europe needs to get its tax sovereignty back.