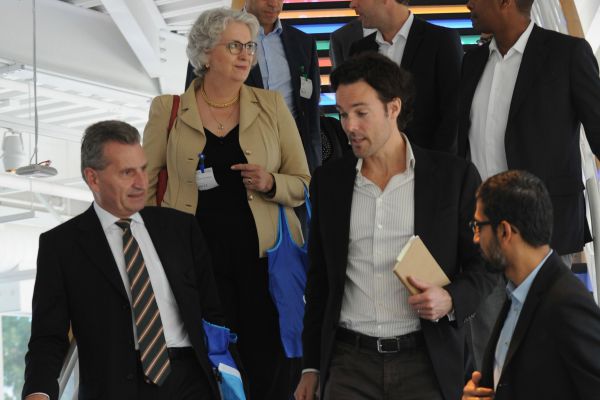 As Gunther Oettinger, sits down to discuss standards during his trip to the US this week, Paul Meller explains why Europe’s approach to this important topic does not need a massive overhaul.

Standards make the technology world go round. Without them, there would be no global computing or phone networks. Devices we consider basic ICT equipment today would not have reached a mass market were it not for the standards that underpin them.

DIGITALEUROPE welcomes the attention given to standardisation in the European Commission’s Digital Single Market strategy. We want to work constructively with EU policymakers to make the system even better than it is today, but the system is very good already so the likely changes from this process should only reinforce the approach taken in the most recent standardisation reforms.

In Europe we can boast one of the most important ICT standards of them all – the 23 year-old GSM standard that transformed mobile phones from a niche product to a must have device used by over five billion people from every continent of the globe.

The Global System for Mobile communications started out as a European standard pushed to the fore by government-controlled incumbent telecom operators. GSM had to compete with equivalent network technologies in the US, Japan and elsewhere, but over time its technical superiority led to it being deployed in over 80% of the world.

Standards put Europe at the technological forefront. Many in Europe are now asking how Europe can repeat the success.

No surprise then that standardisation features prominently in the European Commission’s Digital Single Market (DSM) strategy which was unveiled last month.

Some policymakers believe that Europe needs to re-think its approach to standards so that the region can once again lead the world in a vital field of technology. However, the world has moved on since 1992. Incumbent telcos no longer dominate. The convergence with computing has injected more market innovation and a healthy dose of global thinking into the process of developing standards for the ICT industry.

Yet the DSM blueprint appears to call for standardisation to become a top down, European process, with European governments determining what technology standards are needed – in other words they are looking to duplicate the conditions that gave us GSM.

This approach would be a departure from some of the successful elements in place now. Three years ago, the EU adopted a standardisation package of legislation, which paved the way for, among other things, the creation of a multi-stakeholder platform for ICT standardisation (MSP) involving governments, the European Commission, global standards bodies, industry and users’ associations.

The inclusive process steered by the MSP combines?a top-down, as well as a bottom-up approach to standardisation. Governments help identify societal needs, such as in e-Health, while experts from industry and the standards bodies including industry consortia such as the W3C, IETF, OASIS and IEEE do the legwork in developing the standards.

This is the model we need to keep. This approach, combining policy needs and market requirements, led to the near global adoption of the GSM standard; it was a process supported by governments, but led by industry.

It is essential to maintain a global vision in Europe’s approach to standardisation. Mandating standards for the European market and hoping they will be taken up globally would be unrealistic.

The conditions that gave birth to the GSM standard no longer exist. In addition to the convergence of telecoms and computing, the world has become much smaller; innovations go global much faster, and ICT technologies built on standards are redefining how we interact with our devices on an almost daily basis.

The standardisation process in Europe needs to involve standards bodies and industry consortia from the very start. If it returns to the old top-down approach that existed in the 1990s, there’s a very real danger that other parts of the world – India, China and Russia, for example – will follow the European lead and become inward-looking, or worse, they could use standardisation as a protectionist tool to keep foreign competitors out.