The Estonian Presidency, at a time when ‘ice starts to melt’ 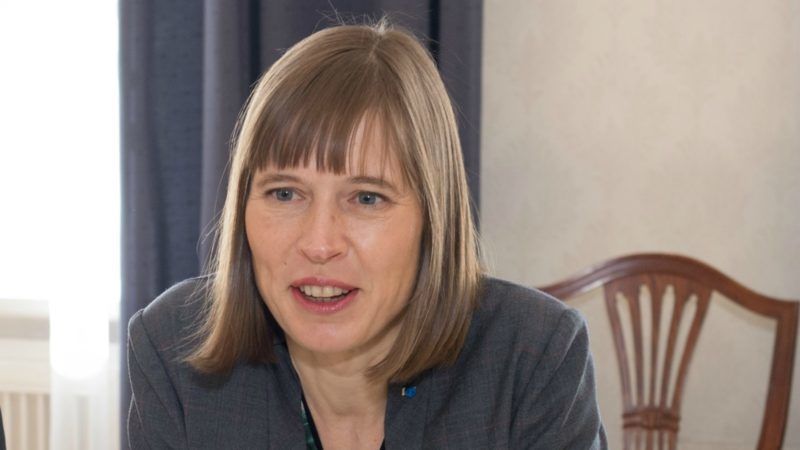 Estonia’s goal is to have a presidency during which the European winter of discontent gives way to a new spring, the President of Estonia, Kersti Kaljulaid, writes in an exclusive op-ed for EURACTIV.com.

Kersti Kaljulaid is an Estonian politician who is the fifth and current President of Estonia, in office since 10 October 2016. She is the first female head of state of Estonia since the country declared independence in 1918, as well as the youngest ever Estonian president, aged 46.

In a couple of weeks, Estonia will assume the presidency of the Council of the European Union for the first time in history.

We do so with great determination and pride but also with a healthy dose of pragmatism. We know that there are limits to what the presidency can achieve in only six months. And we also know that tackling some of the challenges that the EU faces, including migration and the departure of one member state, will not be easy.

For the next six months, our guiding principle will be that of the Bratislava and Rome declarations – delivering concrete benefits for our citizens. We aim at a European Union that is innovative, competitive, prosperous and secure. We are determined to keep Europe safe but also open to the outside world, including its immediate neighbourhood. And, of course, being Estonia, we would like to promote the development a Digital Single Market and to advance digital aspects in all policy areas.

While we seek to move forward with a number of technical dossiers, our overarching political goal is to try to stem the tide of pessimism that has prevailed in the EU in recent years. We would like our presidency to be remembered as the period when the ice started to melt, when we began to take a more positive view of the EU. The odds are in our favour: our economies are growing again, support for the EU has risen in all member states and we adopted the Bratislava and Rome declarations setting out the direction that our Union will take in the years to come.

Despite all of the doubts expressed about our unity and the lack of solidarity, the EU has actually managed to remain united on the issues that matter most and in cases where our fundamental interests and values are at stake. Indeed, the EU is not in bad shape.

Economic convergence is among the areas where the EU has been most successful. The GDP of all ten member states who acceded to the EU in 2004, including Estonia, has increased on average 1.8 times. And, with one exception, all of the states that were EU members before 2004 are also wealthier. This is mainly due to the opportunities offered by new markets and better cost structuring for enterprises.

At the height of the financial and migration crises, anxiety levels were high.  But in retrospect we can see that the EU managed quite well in tackling both challenges head on. Not by withdrawing from common ground but by adopting evolutionary decisions. And as a result, the euro area`s architecture, indeed economic governance as a whole, developed more quickly during the crisis than it would have in calmer economic times. The same is now happening to the Schengen Area and to securing its external borders. In fact, this is how the EU normally evolves for the better, through various crises. The process is slow and looks – and often is – quite painful, especially to those on the outside looking in. Yet at the end of the day, there is no better means of sorting common problems than convening in the Justus Lipsius building of the Council of the EU in Brussels for some active verbal combat.

Nevertheless, we know that support for the EU is still weak in some member states. Not necessarily because the EU has failed to deliver, but due to mixed political messaging. As politicians in member states have started to find out, harmful words are not free. Indeed, it is very difficult to criticise the EU and, at the same time, claim that some of the benefits that the EU delivers are actually quite useful. The message is incoherent and, as a result, not believable. So the problem is not that people get the EU wrong. But rather that they get confusing signals about it.

During the presidency, our aim is to look for ways to further unite Europe. This clearly means advancing new initiatives but doing so in a balanced way. By adopting this as our guiding principle, we should look for initiatives and ways forward that unite us, rather than dealing with issues that pose a risk of dividing member states. It would be much easier to talk about the EU’s social pillar – which the Estonian Presidency duly will take forward – if we simultaneously took real steps in deepening the Single Market, in particular in the field of services. Not only delivering better paid jobs but also better access to these jobs.

We should continue to be ambitious, especially when it comes to further building a more cohesive and connected Europe. But we should not try to overachieve at the EU level. The EU should focus on areas where common action is inevitable – strictly applying the principle of subsidiarity. We must have the courage to clearly allocate responsibilities and explain to our citizens that there are areas where the EU does not have competencies and therefore cannot offer solutions. Areas where we believe that common action is more needed – and possible – include keeping our borders safe and our neighbourhood stable, strengthening cooperation in the field of internal security, deepening the Single Market of goods and services, building a digital single market and infrastructure, completing the euro area and the banking union, building cross-border infrastructure, strengthening the fight against climate change and  investing into big research and development projects where efforts made by individual member states are not sufficient, including defence innovation.

Estonia’s goal is to have a presidency, during which the European winter of discontent starts to give way to a new spring. To have a presidency that people will look back on and say that it was then that we took stock of our core values and found them to be sound, that we recognised that even in testing times our core policies have not failed us, that we started to see the EU delivering for Europe and making a difference globally. Indeed, we believe that we are at the dawn of a more optimistic, self-confident era. And we hope that at the end of this year, the rest of Europe will share this view.

One response to “The Estonian Presidency, at a time when ‘ice starts to melt’”