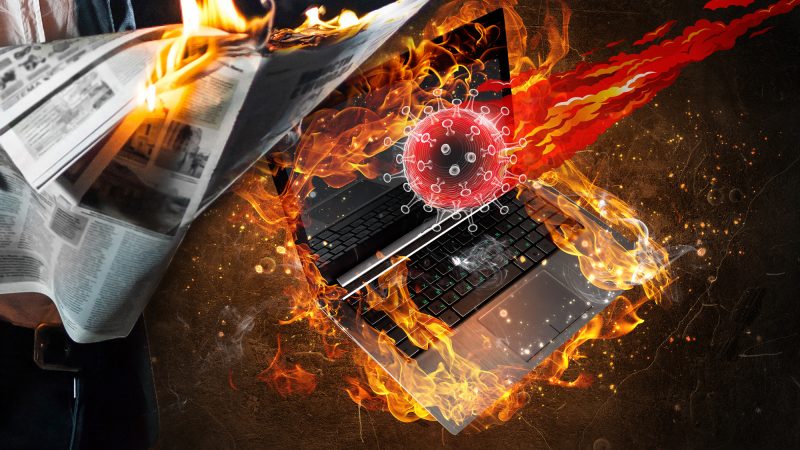 In this Open Letter to the President of the EU Commission, media stakeholders and experts, in a personal capacity, along with MEPs and former MEPs ask for the Commission to support trust in public action, and to help sustain the media in this testing time. [Shutterstock]

The current Coronavirus pandemic impacts our democracy infrastructure. Like banks during the financial crisis, will the media be saved? For this, institutions and governments should take short term actions, while continuing to work on medium term policy-making.

As people are confined at home and worried, media readership is booming. Parliaments and civil society organisations are affected too: the media remains a pillar of democracy, and trust – as long as it can function properly. Apart from public broadcasting, news reporting is a success done on a shoestring: journalists do an amazing job, but risk both their health and their jobs.

The media sector was already fragile, due to the pace of technological change and the move of most advertising to US platforms. As we enter a recession, most of the remaining ad revenues are on hold. And as people can’t meet, the press now loses its main profitable business: events.

Moreover, newspaper distribution is suspended in some places. If independent media vanish, fake news will not be countered, making coronavirus an ‘infodemic.’ Public broadcasters play a major role, but private sector voices are needed, especially in times of reduced liberties. The health crisis could become a major confidence crisis, feeding all fears, radical nationalism and worse.

To avoid that, politicians need to think of who pays for the coverage. To help the media survive, and adapt, media sector strategies are needed, both from the public and private sector. The EU cannot do it alone – Member States and philanthropy have a key role, the Unions is preparing a better policy frame, and should now lead by example.

Medium-term strategy: policies for the ecosystem

Rebalancing the ecosystem platforms/advertising/media has notably been left behind in the EU’s Digital Strategy. It has horizontal dimensions like the Digital Services Act, and potentially some moves around journalism.

Medium-term policy actions (like regulating platforms and like a sector strategy for the media sector) are necessary. We are not addressing them in this Open Letter: they will come along too late for what is required now.

EU officials talk proudly of draft Competition guidelines allowing State Aid during the health crisis, of course applying to media like all sectors. In the case of the media sector, tax deferments and loans are not enough, only postponing the cash problems.

President von der Leyen: allowing straight aid is OK, encouraging others is good, but leading by example would be even better…

The media needs to take some costs out, gain replacement revenues, and boost innovation. As part of the already sketched economic recovery plan, here are some examples:

– Reimburse social security costs for bona fide journalists (not just postponing payments): This is up to Member States and social partners, but the EU can encourage it. One could also ease up rules, especially for non-employee freelancers.

– Recommend media funds to support quality news and fight disinformation: To be set-up where they do not exist yet. France’s aides à la presse, for example, use objective criteria and respect media independence. At the EU level, have an independent media board assess open calls on fighting disinformation, related to coronavirus or future major issues.

– Spend on advertising: Advertising is a fast and respectful way to feed the media, channeling money through objective channels and contracts. Unlike some subsidies, it does not interfere with editorial freedom. Massive public information campaigns (not Google ads) would sustain public trust in politics, and journalism too. In Europe, Newspaper advertising amounts to around 12 billion euros a year. Some order of magnitude: if one assumes losing one third this year, the shortfall would be 4 billion euros; the Commission and the Parliament could spend half of it, 2 billion euros, and encourage governments to spend as much. At EU level, that money could come from re-allocations, while at national level, it could be part of the economic recovery plan already decided.

– Trust events to media companies: There is a good trend to consult the public widely, online and at physical events. Participative democracy will be in demand after the frustrating lock-downs, and for the Conference on the Future of Europe. Public institutions tend to pay officials or consultancies to do this. Media are good organisers and independent moderators: they should be a systematic part of the procurement ‘tool box’.

– Provide hope for later: Innovation. The goal is not a subsidized sector, but to go back to modernizing it, for sustainability. Earmarking for media could be greater under the upcoming Multiannual Financial Framework (MFF). Under the R&D programme Horizon Europe, Creative Europe currently earmarks 61 million for journalism: far too little.

– Strengthen media’s Capital: equity from InvestEU and from private ‘socially responsible investors’ should be boosted.

Commission President, last July you declared Democracy – including media freedom – one of your six priorities. How much is it worth to safeguard the democracy infrastructure? It will certainly cost less than the €1.5 trillion bailout of the financial infrastructure after 2008.

Preserving the media sector would also get a very small figure compared to Europe’s budgets (total EU GDP 2019: 18 trillions €, total EU budget set for 2020 before the crisis: €169 billion, so each billion is only 0.6 % of the EU budget). In fact, total crisis media funding, mostly a ‘one off’, would be less than the special levy on platforms, currently pitched at around €5 billion per year.

Before turning to political next steps, let us consider the private sector, notably foundations:

– Greater commitment by philanthropy: It needs to step up and understand that without functioning media, civil society collapses. Efforts such as the Journalism Funders Forum are urgent and much needed. The philanthropic sector can complement EU and government actions by filling the gaps that neither the public nor the private sector could cover fast. It should address market failures for public interest journalism, by catalysing innovation, subsidising risk, and by working with civil society to deliver journalism of value.

Actions required now: processes exist
Two related EU Actions Plans are currently foreseen for this Autumn: one on Democracy and one on Media. The democracy agenda is led by Vice-President Jourova, and her plan should naturally include some media aspects, such as media freedom, pluralism, and countering disinformation with quality journalism.

A more ‘industrial’ Media Action Plan was promised by Commissioner Breton during his parliamentary hearing, as an ‘Action Plan for media and broadcasting’. However, certainly due to many pressing demands, priorities seem to go ‘on’ and ‘off’.

That plan did not feature in the Commission work programme that you, Commission President, presented for 2020. Then the Digital strategy led by Executive Vice-President Vestager mentioned it, rightly. Then the New EU Industrial Strategy by Commissioner Breton again left it out, although it clearly is a sector strategy.

We should accelerate greatly. Not merging the two actions plans Democracy and Media, which could make things slow and wordy. Anticipating in April a draft Media Action Plan may be difficult too: industry and competitiveness policies are connected to the overall digital discussions.

As for the Democracy Action Plan, it could come faster and expand on urgent issues, plus the economic prerequisites for healthy journalism. In addition, to prioritise funding for urgent actions, the Commission could issue very soon a draft ‘Coronavirus Media Plan’. This would list what it can do itself and offer to the Council how to use the Coronavirus recovery plan in this area.

Not gathering in Strasbourg, MEPs understand media needs so far: some are co-signing this call, many others would be supportive. As for the Executive, it has the right format in principle: the Media Project Group of Commissioners. Chaired by Vice-President Jourová, this group notably gathers the power to regulate digital (EVP Vestager), industrial strategy (Commissioner Breton), plus funding innovation and skills (Commissioner Gabriel). These policies are what the media sector needs from the EU, urgently.

President von der Leyen, you have a broader crisis on your hands, do you need to be involved here? Not directly – despite being in charge of EU Communication – if your Commissioners now converge much faster. Building on your initial commitments, you need to ask them just two questions: ‘where is our media action plan?’, and ‘who is in charge’?