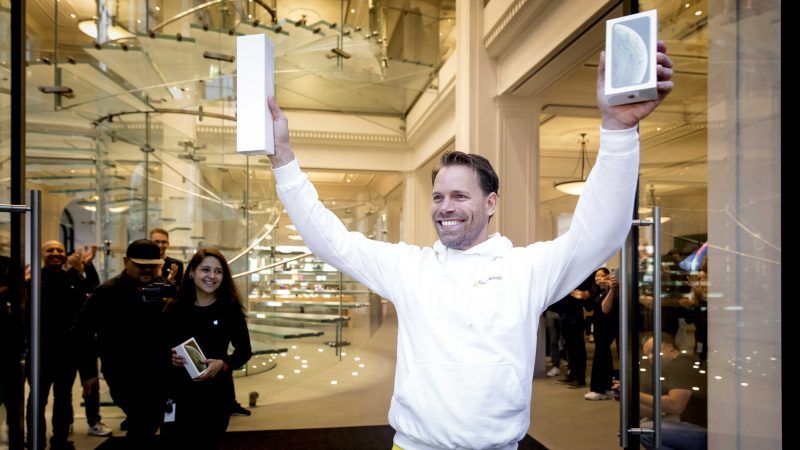 Bas van der Putten holds up his new iPhone after being the first customer in line for new products at the Apple Store in Amsterdam, the Netherlands, 21 September 2018. [EPA-EFE/KOEN VAN WEEL]

Last week it was Apple, next month it’s Google and last month it was Samsung. Each unveiling their latest smartphones to an expectant public. The latest features will be scrutinised. And, naturally, the prices to the consumer will be debated, writes Brian Scarpelli.

One aspect will be overlooked by almost all: the amount in licensing fees that phone manufacturers have to pay to component suppliers like Qualcomm or Ericsson.

Such companies earn billions of euros a year charging businesses hefty sums in royalties to include their technology in the latest products.

Paying royalties to use this technology is necessary because the patented technology is included in technical interoperability communication standards that underlie the innovative communications products that billions of consumers around the world rely on every day.

And as other “dumb” devices become “smart” (internet connected) – a broad category collectively termed the Internet of Things (IoT) – industries far beyond the mobile phone sector will face the same royalties.

But back to smartphones, which can easily contain thousands of patents – recent studies estimate that licensing fees for 4G chips alone can stack up to 10% of the wholesale price of the phone. And when you add the latest 5G tech on top the amount goes up again.

These royalties may seem nominal when considered individually but they add up. Especially when suppliers force licensees to buy a package of patent licenses in order to get the one or two that they need. This is a practice called royalty stacking.

That is why, in order to avoid the death of innovation by a thousand cuts, it’s so important that these special standard-essential patents (SEPs) are valued at a fair, reasonable and non-discriminatory (FRAND) value that rewards the patent holder for their research and development investment, while ensuring reasonable access to any willing innovator-licensee.

Qualcomm and others defend their royalty stacking with a variety of explanations or by denying that royalty stacking even exists.  They promise to negotiate discounted rates with the big manufacturers, and it’s easy to rationalise these justifications for royalty stacking by assuming that large, multi-national corporations can absorb such costs.

But what’s more easily forgotten is the impact of such royalty stacking on the small entrepreneur – the SME with a great idea but not much spare cash, trying to bring a product to market. The SME innovator, unlike a large corporation, faces serious risk of being priced out of business by the royalty demands of x, y and z.

The biggest opportunities for SMEs are in the IoT – the real-time data analytics-driven, connected device marketplace encompassing everything from smart home devices to virtual healthcare services. According to the Centre for Business Imports, the European IoT market is estimated to grow to €1.2 trillion by 2020.

For an SME to take advantage of new IoT market opportunities, they and their investors must weigh the costs associated with licensing the fundamental technologies and networks the IoT depends on versus the potential profit.

These costs are not insignificant and gobble up financial resources that could be invested in hiring new talent for research and development of new software, hardware and services.

Last year, the European Commission issued a warning on royalty stacking, calling it a practice with harmful effects on end users – both in the consumer and enterprise context – and should be avoided.

Despite that warning, we find ourselves once again seeing a number of SEP holders continue to demand higher and higher rents if they perceive their patent will be used in a product they consider to be more valuable, whether it is a new 5G-capable smartphone from a global technology company or a clever niche product invented by a small European business.

The commission has called out the problem and has committed to do its part to avoid royalty stacking. Patent policies developed by the standard setting organisations that develop standards can take steps to avoid the harmful effects of royalty stacking as well.

The former and the latter would lower per-unit costs and get cutting edge tech into the hands of countless Europeans more easily, improving the ways that European citizens work, live, and play for decades to come.

When patents are contributed into a standard, the holder voluntarily commits to license them forever and always, to any willing licensee on FRAND rates. It’s a trade-off between charging the maximum fee possible for licenses in return for access to a much wider market.

SEP holders who renege on their commitment to license in a FRAND manner are abusing their position and effectively trying to have their cake and eat it too. This threatens healthy competition and may jeopardise the potential of nascent markets like IoT.

Technology thrives on breaking barriers. Allowing royalty stacking to continue reinforces barriers, and that only serves the interests of a small but important link in the innovation value chain. The wider interests in that chain must be considered otherwise they – and ultimately European consumers – will lose out.