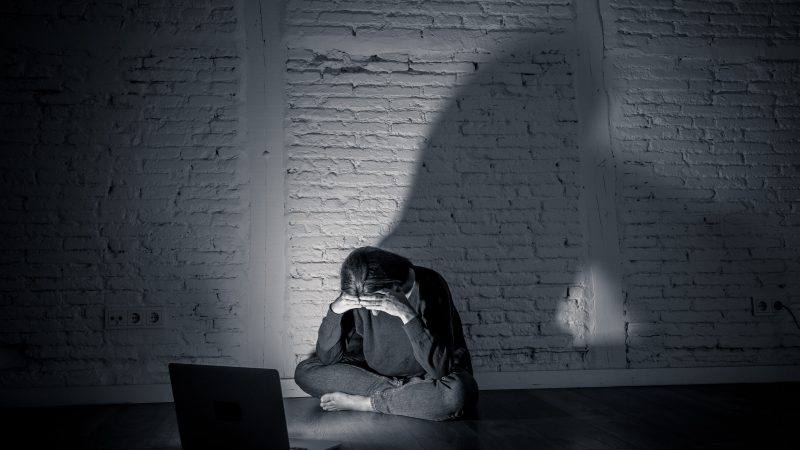 "Cases of image-based sexual abuse have spiked in the last years, and so has the fear. Every third woman in the EU is afraid that their images could be shared without their consent." [Shutterstock / SB Arts Media]

One month ago, the European Commission proposed a Directive, one aim of which is to punish perpetrators of cyberviolence against women, including the non-consensual sharing of intimate images. Now, survivors are shocked that the EU is sliding back on proposals under the Digital Services Act (DSA) to deal with the other side of the problem: pornography platforms that cash in on abuse.

Shanley Clemot Mclaren is a founder of the French collective against image-based sexual abuse, StopFisha.

Anna-Lena von Hodenberg is a co-founder and CEO of HateAid, a counselling and litigation financing NGO for victims of online violence in Germany.

Dr Silvia Semenzin is a post-doctoral researcher on Digital Sociology at the University Complutense of Madrid and an Italian activist for online women’s rights.

In January this year, the European Parliament’s plenary voted to include specific measures for platforms of user-generated pornographic content in the Digital Services Act. These measures would allow victims, like Ines and thousands of others, to request a fast take-down of image-based abuse, improve the quality of content moderation and aim to prevent the uploading of non-consensual material in the first place.

Only a month ago, the Commissioner for Equality, Helena Dalli, presented the proposal for a long-awaited and long called-for Directive aimed at protecting women from violence, including the criminalisation of the non-consensual sharing of intimate images.

Such a fragmented approach to addressing different sides of the same problem – gender-based cyber violence – is hard to understand, especially from the victim’s point of view.

Cases of image-based sexual abuse have spiked in the last years, and so has the fear. Every third woman in the EU is afraid that their images could be shared without consent. Furthermore, it is a tactic, and an instrument used to intimidate women and pressure them to withdraw from society and politics – in the first week of Annalena Baerbock’s candidacy for the Chancellor of Germany last year, deep-fake intimate footage was spread on the internet.

In line with other forms of gender-based violence, image-based sexual abuse aims to humiliate, silence, and censor women in online spaces and physical and social spaces.

It is a shame, guilt, and fear of explaining the situation to families, employers and partners that victims are left with. It is about being slut-shamed at school, losing friends, jobs and perspective while often being blamed for the received violence.

With image-based sexual abuse, the rule is the following. Once a victim, always a victim, as the risk of the non-consensual content staying online forever is very high. For many, it becomes a life-long mission to search the corners of the internet and request removals after putting their children to sleep.

When zooming in on the DSA itself, its horizontal nature and questions around its suitability for including specific provisions for specific platforms should not be a strong enough argument to leave victims waiting for the next opportunity of platform regulation, which might not come that soon. We should be asking if the EU’s fragmented approach to gender equality at large should come in between adopting an effective regulation to halt image-based sexual abuse.

Finally, the fact that the European Parliament’s plenary has already called for measures to counter image-based sexual abuse on pornography platforms twice in the last five months (first with the resolution on Cyberviolence and then with the report on the DSA) should add to the urgency of the issue.

Cyberviolence and cyber sexism know no borders or limits, and, unfortunately, they are getting worse every day. The question is, what kind of response are society and lawmakers ready to provide?

The stakes and the human cost are too high. Measures against gender-based violence should be included in various pieces of EU legislation: that’s why we urgently need the EU institutions to act now when they have a clear opportunity to do so with the DSA being adopted in the foreseeable future.

We need to approach the issue of image-based sexual abuse transnationally and from all sides, including through the DSA. Victims do not have the privilege of waiting for another law. Cyberviolence and image-based sexual abuse are rights violations that happen in online spaces. They need to be addressed in the DSA; otherwise, it will fail to safeguard women’s rights.