The perturbing silence surrounding the case of Julian Assange 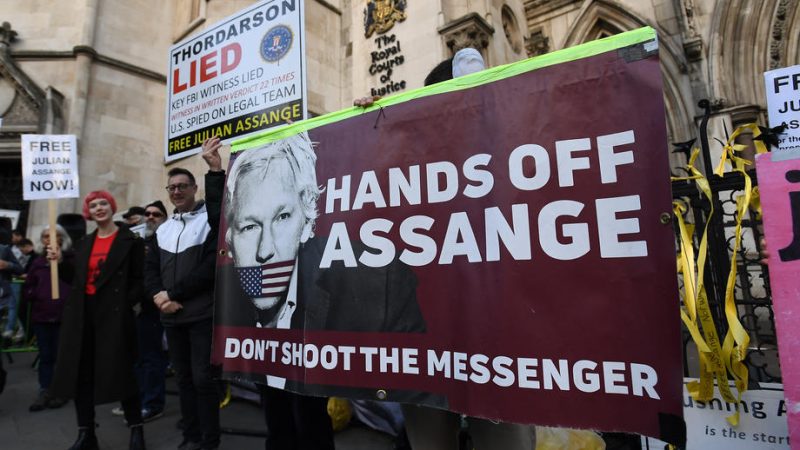 Julian Assange supporters gather outside the High Court in London, Britain, 28 October 2021. Julian Assange is facing extradition to the United States over the publication of secrets relating to the wars in Afghanistan and Iraq. The US government is appealing against a British judge's decision to block the extradition of WikiLeaks founder to face trial for publishing military secrets. [EPA-EFE/ANDY RAIN]

The case for the extradition of Julian Assange raises questions about the freedom of the press, about the extraterritorial creep of US law and Europe’s readiness -or lack of – to protect media freedom, writes Dick Roche.

Dick Roche is a former Irish Minister for European Affairs and former Minister for the Environment. He also served as Chairman of the Irish Commission of Justice and Peace.

Since its foundation, Wikileaks has been a thorn in the side of powerful US agencies.

It caused red faces in Washington by publishing a manual on the operation of the Guantanamo detention centre in 2007.

In April 2010, Wikileaks won global recognition by releasing shocking video footage of an attack by US helicopters in Baghdad that killed civilians, including two Reuters staff members.

Later in 2010, Wikileaks published an extensive cache of material relating to US conduct in Afghanistan. Iraq, material on Guantánamo, and US diplomatic cables from US Army intelligence Chelsea Manning.

The document release infuriated US agencies. A grand jury held closed hearings as to whether Assange and Wikileaks should face charges under the Espionage Act and the Obama administration held its hand. It took the view that if Assange were charged, a precedent would be set impacting traditional media that made revelations based on leaks bringing political blowback.

During the 2016 US Presidential race, Wikileaks made global headlines by releasing emails sent by Hilary Clinton on a private email server while Secretary of State and emails from the Chair of Clinton’s election campaign, John Podesta. The action damaged the Clinton campaign. It also damaged Wikileaks. Democrats accused Assange of aiding Russian efforts to elect Donald Trump.

In Spring 2017, as the Trump administration was settling in, Wikileaks was back in the news revealing that the CIA had spied on political parties contesting the 2012 French Presidential and dropping a bombshell which it code-named “Vault 7”.

Vault 7 revealed that the CIA had developed malware targeting Android, iOS, and Windows operating systems allowing it to access mobile phones, laptops, and even smart TVs. An internal investigation called the release “the largest data leak in CIA history.”

The CIA was deeply stung by the leak. Mike Pompeo, the newly appointed CIA Director, called Wikileaks “a hostile intelligence service” and argued that Assange “as a foreigner” had no First Amendment rights, the rights that protect journalism.

A series of legal actions followed. In December 2017, a federal judge issued a criminal complaint against Assange, making him the first person charged under the 1917 Espionage Act for publishing a government document. A series of indictments followed in March 2018, May 2019, and June 2020. Yahoo News reported that the CIA examined the possibility of kidnapping or even assassinating Assange.

While this was happening in the US, Assange was facing major legal problems in the UK.  In June 2012, while facing extradition to Sweden on charges of molestation and rape – which he denied – Assange jumped bail and took refuge in the Ecuadorian embassy.

Assange, who claimed that if extradited to Sweden, he would be handed over to the US, remained in the embassy until April 2019 when, following political changes in Ecuador, British police were allowed to enter the embassy and arrest him.

Within days of the arrest, Swedish prosecutors dropped the investigation into the rape allegation. Sweden’s statute of limitations had already run out on the molestation charges.

Assange was charged with jumping bail in 2012 and given a 50-week prison sentence.

The US immediately released an 18-count indictment against Assange and sought his extradition from the UK to the US. The charges in the indictment carried a potential 175-year jail sentence.

In January, a UK judge blocked the extradition request citing concerns over Assange’s mental health and the risk of suicide. The US Department of Justice indicated that while “disappointed by the Court’s ultimate decision, we are gratified that the US prevailed on every point of law raised”.

Just two weeks later, Joe Biden was inaugurated as President. On 9 February, it was announced that the Biden administration would appeal the January extradition decision.

The appeal was heard in the  UK High Court on 27 and 28 October. In court, the US offered a “package of assurances” as to how Assange would be treated if extradited, including an offer allowing him to serve any custodial sentence in Australia. That was the only US concession.

The US argued that the ‘political exception’ bar on extradition did not apply in Assange’s case, that publishing the documents received from Chelsea Manning was not a ‘political’ act and that Assange’s actions were not protected by the First Amendment of the US Constitution and contested his freedom of expression protection under the European Convention on Human Rights.

The case set out by the US has chilling implications for press freedoms and for those who have the courage to reveal evidence of state wrongdoing.

It closes down protections that have been the key to protecting the ability of journalists and the media to share information that those in power sometimes rather suppress.

In 2013 the Obama administration decided not to take action against Assange on the grounds that what Assange and WikiLeaks did was similar to journalistic activities protected by the First Amendment of the US Constitution. The Trump and now the Biden administrations reverse that position.

By circumscribing protections that have long been accepted as the norm the US is undermining an important bedrock of democracy.

There is a second aspect of the Assange case, that has received less attention than it deserves – the issue of the extraterritorial reach of US law.

In 2019 the German Institute for International and Security Affairs (SWP) flagged concerns about the extraterritorial reach of US law, noting that “European policymakers have recently been exposed as more or less powerless” to deal with US extraterritorial legal creep. A January 2021 report produced by CEPS for the European Parliament reflected similar concerns.

The case of Frédéric Pierucci, a French citizen and former Alstom executive, provides a stark example of the human impact of the extraterritorial reach problem.

Pierucci was arrested in New York in 2013. He languished in US prisons for two years during FBI investigations of corrupt behaviour by Alstom, his employer in Indonesia. The corrupt activities had little to do with any direct action by Pierucci. He was effectively an economic hostage.  The case ended with Alstom being forced to pay the biggest financial penalty ever imposed by the US and losing control over key areas of its business to its US competitor General Electric.

When Wikileaks released the documents from Chelsea Manning, Assange, an Australian national, was operating in Europe. The release of the material was not challenged in Europe. No European prosecution agency charged Wikileaks or Assange with breaking any law in Europe. The US action against Assange is a sinister extension of US extraterritorial reach.

The lack of any significant push back within Europe against Assange’s prosecution is a disturbing example of the powerlessness noted by SWP in its 2019 report.

The European Convention on Human Rights and the Charter of Fundamental Rights of the European Union commit to protecting media freedom. The perturbing silence on the Assange case raises questions as to how seriously that commitment is taken.