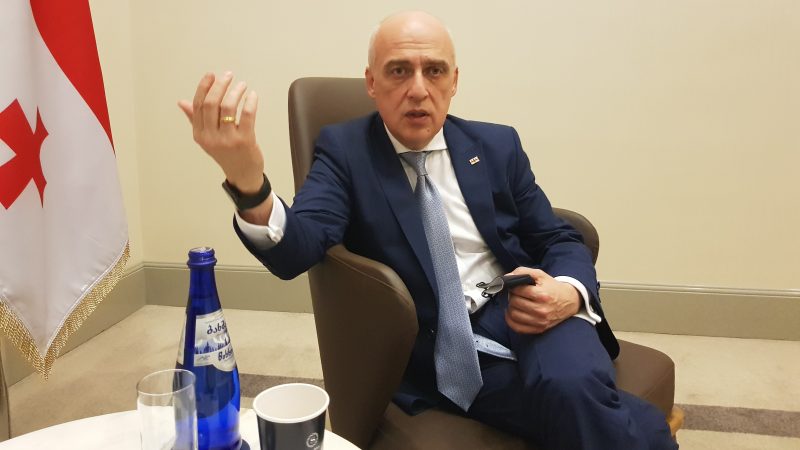 In an exclusive interview, the foreign minister of Georgia, David Zalkaliani, discussed this week’s Associated Trio summit in Batumi, relations with Ukraine, the internal political process and the country’s EU ambition.

David Zalkaliani is a Georgian career diplomat serving as the Minister of Foreign Affairs of Georgia since 21 June 2018. He spoke to EURACTIV’s Senior Editor Georgi Gotev.

Was it easy to bring the presidents for this Trio summit in Batumi? For example, for bringing Mr Zelenskiy, it took a presidential pardon and three Ukrainian nationals accused of having crossed illegally the Georgian border were released from a Georgian jail just before he arrived.

There are a lot of speculations about this issue, but I can assure you that this was not connected to this conference, because the idea of this conference was presented by the president of Georgia [Salome Zourabishvili], some time ago, during Charles Michel’s last visit to Georgia where he was mediating the internal process with the different political parties in Georgia. And this was the idea of the president of Georgia to invite the associated partners, Ukraine and Moldova, to the Batumi International Conference.

And this was also agreed later on when I met with my colleagues, the foreign ministers of Ukraine and Moldova in Kyiv, when we signed a memorandum of understanding on establishing the Associated trio. So, I can assure you that there is no connection with regard of this speculation, which we heard from the former president of Georgia [Mikheil Saakashvili], he somehow gave this narrative that President Zelenskiy was reluctant to come to Georgia, which is absolutely false information and has nothing to do with reality. We are strategic partners and we decide all the issues in a spirit of strategic partnership, so there was no obstacle or impediment.

But Mr Saakashvili is an irritant in the Georgia-Ukraine relations. Does the Ukrainian side, which hosts him, understand your concerns?

Yes, we have very frank and open discussion with our Ukrainian colleagues. Way back during the parliamentary elections of last year in Georgia, there was an issue of foreign citizen Saakashvili, citizen of Ukraine, interfering into the Georgian electoral process. So we made it clear to our partners: this is not acceptable. This is a violation of George’s internal procedures and legislation. But since then, the situation is back to the spirit of our strategic partnership.

Coming back to the issue of the Batumi conference and the Associated Trio, what would you like to highlight?

I would like to highlight the importance of the differentiation principle. We are three countries with Association agreements, DCFTA [Deep and Comprehensive Free Trade Agreements], visa liberalisation. And it is obvious that compared to the other Eastern Partnership countries [Armenia, Azerbaijan and Belarus] we demonstrate significant progress towards membership. That’s why one of the main objectives for us is to reflect the progress which the three of us have made towards our goal, which is full integration to European Union, and also to figure out what is the after-2020 agenda for the Eastern Partnership, because it’s obvious that against the background of the geopolitical changes in the region we need a creative approach, how to revitalize the Eastern partnership, and how to adapt it to the current realities.

Charles Michel mentioned the issue of good governance and in each of the Associated countries there are such issues. In Georgia in particular, the political reconciliation is not yet achieved. How do you think the situation will evolve?

First of all let me express my personal and my government’s deepest gratitude to President Michel for his personal engagement. It also demonstrates how important is his agenda, in the agenda of our European partners, the situation in Georgia. That’s why the mediation process which was finalized by the agreement of 19 April was really important, and now it’s time to fully implement it,in order to move forward and in order to solve all this artificial crisis which was created right after the parliamentary elections in Georgia.

Charles Michel spoke of problems regarding the judiciary. He said the recent fast-track confirmation of Supreme Court judges did not fully reflect the results of consultations with international and domestic stakeholders, calling it “a missed opportunity”.

Of course there are some problems with regard to this reform process, because there are different readings, and different perceptions from both sides.  From our side we consider that the agreement is fully implemented, even in the context of judicial reform, we think we already implemented this agreement also taking into consideration the recommendations coming from the Venice commission, OSCE and ODIHR.

There is a different reading on the other side, on the implementation of this particular part of this agreement, but we believe that there is still some room for further continuation of the dialogue in order to come to the final agreement about the substance of this important aspect, which is the continuation of the reform process in the judiciary sector, because we understand that it’s important part of our reform process for our democracy, for strengthening our democratic institutions, it’s really important to have this agreement implemented because this is also important part of our European integration agenda.

It’s highly unusual for a Council president to mediate like Charles Michel has been doing in Georgia. How do you assess this experience?